Stockfish and Komodo continue to lead together. Houdini and Stockfish drew their game, completing a full set of draws for the top 4 engines. Ginkgo closed the gap to Andscacs, but has yet to play Komodo and Houdini.
In the race for qualification it appears that Fizbo, Hannibal and Jonny are out. I ran a simulation to predict the qualifiers, you can see results after 17 rounds and after 18 rounds. The simulation predicts that Gull and Fire will qualify, and one of Booot and Chiron.

Gaviota - Houdini: A quiet game, evals stayed close to zero throughout the game, adjudicated in a RNN vs RBN position. Gaviota didn't blunder and Houdini had to settle for another draw.

Vajolet2 - Komodo: Vajolet2 had an eval advantage from the opening, Komodo equalized easily and evals became 0. The engines exchanged pieces until reaching a RB vs RB position and played until adjudication. Komodo back to second place 0.5 points behind Stockfish.

Hannibal - Andscacs: Hannibal attacked the king side leading to a R vs BN imbalance right from the srart of the game. Both kings remained uncastled, after exchanging queens and a pair of rooks Hannibal's king side attack was over and evals  came down to 0. The game reached a drawn R vs BN ending. Hannibal did its best against a strong opponent, still in the race but needs wins.

Gull - Fire: I had a live blog entry for this game. Gull had an eval advantage in the middlegame, with most of the action concerning a passer on the a file. After it was captured the engines exchanged pieces until reaching a drawn rook ending. Gull played until the 50-move draw, perhaps if it had tablebases it would have lowered its eval sooner.

Andscacs - Ginkgo: The engines exchanged pieces until reaching a rook ending, then continued to take out pawns.The game ended in a tablebase draw. Both engines with excellent qualifying chances.

Arasan - Hannibal: Evals were close to 0 for 30 moves, though the position on the board was very active. Arasan then got an advanced passer on the queen side, and after a few exchanges only QRB vs QRN were left and the passer looked very strong. The evals went over 2 for Arasan as Hannibal gave a rook for a bishop, and Arasan abandoned its passer for a strong king side attack and advancing pawns. After queens were exchanged it was game over for Hannibal. A surprising result, though Arasan has its moments. A real blow for Hannibal's qualifying chances.

Nemorino - Jonny: Jonny's eval of over 1.5 suggested it thought it had a big advantage. However the engines started to shuffle from move 25, and nothing changed in the game besides a few pawn moves and piece exchanges. After more than 120 moves the engines had enough, they opened the position and Jonny got a perpeual check draw. Jonny losing another 0.5 point in the race.

Komodo - Chiron: The engines exchanged pieces at a fast pace, at move 35 only BN vs BN were left and shuffling began. Komodo had an eval advantage which grew to around 1 after exchanging knights and winning a pawn. The remaining bishops had opposite colors and Chiron held the position easily, it just took more tham 150 shuffling moves to reach adjudication. Chiron with a precious half point.

Stockfish - Booot: The engines ran out of pieces fast, only N vs B left on move 24. The rest was just waiting for adjudication. Booot can be happy with the draw, Stockfish gives Komodo a chance to catch up at the top.

Vajolet2 - Houdini: Another exchange-fest, only B vs N remaining at move 29. Houdini still thought it had something but had to settle for a draw.

Jonny - Komodo: The game seemed to be heading for a draw, with many exchanges and evals close to 0. In the endgame Jonny gave a rook for a knight and pawns, leading to a N vs R ending. It appeared that Jonny had a strong fortress protecting the entry points and guarding the pawns. However, Komodo found a crack by applying pressure and using zugzwangs. After the rook penetrated the pawn line it was a matter of time for Jonny's fortress to crumble. Komodo is a master in these situations. Jonny will probably not qualify.

The opening was an italian pianissimo, should be very drawish. Stockfish's moves were far from drawish, it opened up the king side, exposing its king. On move 14 the black king was the most forward black piece, king safety out the window. A very loud pianissimo. 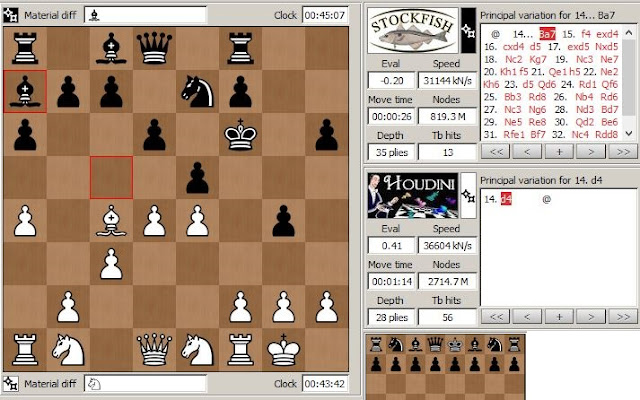 Houdini was quite happy about this, with evals near 0.5. It tried to attack the vulnerable black king but wasn't effective enough. Stockfish managed to defend while counter-attacking the white king. 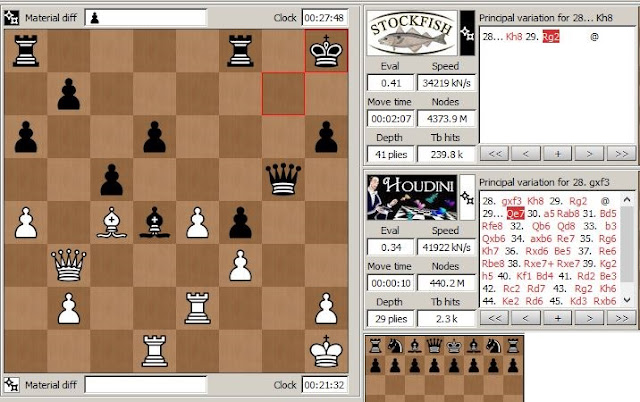 The rest of the game was less wild. The engines exchanged queens and a pair of rooks, evals returned to 0 and finally the inevitable draw. Stockfish played a very sharp game but held it together. No decisive games between the top engines in stage 1.