The last two rounds were full of drama. Gull's two draws (after 3 in the previous rounds) gave it enough for a tiebreak, but then it had to watch as one by one the other contenders qualify with more points or better tiebreak scores. The race for qualification did not finish until the game before last, Chiron's win meant that it was in and Gull was out.

Komodo finished first with a margin of 1 point over Stockfish. Two draws in the final 3 rounds were not a good results for Stockfish. The crosstable for the top 4 engines is draws only, it is very hard to predict how these engines will be ranked in the next stage but I'm sure the competition will be harder.

Stage 2 started almost immediately after stage 1 was over. Good luck to all the qualifiers. To those which didn't I wish less bugs and better algorithms, hope to see improved versions next time.

Some of the game highlights:

Nirvana - Stockfish: The king side was empty while the action was on the queen side. The engines quickly exchanged pieces through the open files, reaching a drawn RN vs RB position. Stockfish with a second draw in a row, Komodo can extend its lead at the top.

Chiron - Fruit: Chiron had an eval advantage from the opening, which increased rapidly with inaccurate play from the weaker Fruit. After many exchanges Chiron had an advanced passer in a RBN vs RBN position with eval over 2. Before long it was two pawns up, an easy win for Chiron. Chiron needs another win to have good chances of qualification, its SB score is high.

Hannibal - Booot: While most pieces were on the board Booot thought it had some advantage with evals at around 0.4. When the minor pieces were off and the engines exchanged queens the eval dropped to 0 in a double rook ending. Hannibal forced a perpetual check to get a draw. Booot has 14 points and one game to go against Ginkgo, may be heading towards a tiebreak.

Ginkgo - Houdini: Many pieces were exchanged early, Houdini had a bishop pair with a lot of space while Ginkgo was a pawn up with queen side majority. Neither engine could improve its position, and after exchanging a pair of rooks they settled for a repetition draw. Ginkgo is at 14.5 points with one last game against Booot. This means that one of these will have a final score of 14.5 (or less if Booot loses), so Chiron can force a tiebreak if it wins.

Gull - Bobcat: See the live blog for this game. Gull had a nice combination that started with a knight sacrifice, causing Bobcat's king to walk forward, eventually leading to being a pawn up. Evals were over 1 for a while, Gull first with a central passer and then with two connected passers. Bobcat was able to defend, blocking the passers and creating a wall that Gull could not penetrate. Evals came down as pieces were exchanged leading to a drawn RB vs RB position. It took a while for the game to end in a tablebase draw. Gull is now at risk of not qualifying, probably won't get more than a draw in the last game against Andscacs.

Andscacs - Gull: By move 21 only RBB vs RBN were left, evals close to 0. The game continued for a while but the drawn outcome was clear. With this draw Gull completes a run of 5 draws, it still has a chance to qualify but may need a tiebreak. Another consequence of this draw is that Ginkgo has qualified, since its final SB will be higher than Gull's in any case.

Texel - Fire: Texel won a rook for a knight, evals stayed close to 0. Both engines had advanced passers on opposite sides of the board in a RBB vs BBN position. Fire's pawns on the queen side were strong and Texel had to give back the exchange to try to stop them. The game reached an opposite color bishop ending, Fire was a pawn up. The evals were approaching 1 and Fire took another pawn, but still this type of ending is very drawish. Suddenly Fire's eval jumped above 6.5, Texel blundered in time trouble and Fire found a win, using pawns on both flanks to force Texel to lose material. With this win Fire qualifies for stage 2, two more spots available.

Booot - Ginkgo: Booot had an eval advantage after the opening, with more space than Ginkgo in a closed position. After opening the queen side Booot trapped a rook and Ginkgo exchanged it for a knight, evals were above 1. Ginkgo tried to close the king side, Booot opened it up as well, and more pieces were exchanged. Booot grabbed a pawn allowing Ginkgo's queen to capture a knight with a pretty check fork. After exchanging queens only R vs NN were left and Booot's connected passers on the queen side forced a win. Ginkgo's knights could not stop them without king support. This was a surprising win for Booot which now also qualifies for stage 2, Ginkgo dropping in the ranks but its place in the top 8 is already certain.

Gaviota - Chiron: This was a must-win game for Chiron. The game was more or less balanced with many pieces on the board and an eval advantage for Chiron. Gaviota was doing alright when most pieces were exchanged and only QRB vs QRN remained. With all the pieces on the king side Chiron's king found a hiding place behind a white pawn while Gaviota's king was under attack. Chiron's rook got to the 2nd rank and Gaviota could not defend its queen side pawns. After queens were exchanged Chiron was 3 pawns up, winning the game. Chiron is the last qualifier, Gull is out.

Fire with 14 points was still in the qualifying race, it would have been satisfied with a draw in this game. The position became static very early and the engines were shuffling from move 13, including a few pawn moves. The evals were slowly increasing for Komodo but there didn't seem to be a plan for improvment. This changed suddenly after Fire's move 30 Kh1. 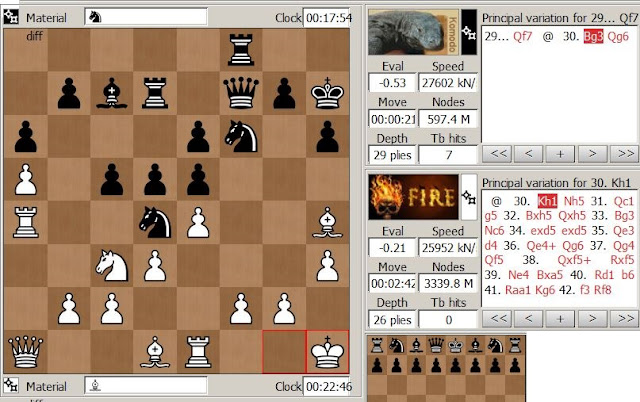 Komodo saw an opportunity to attack the king with almost all the white pieces on the wrong side of the board, and with its d4 knight slowing down the defense. Fire became desperate very quickly, evals shooting up. 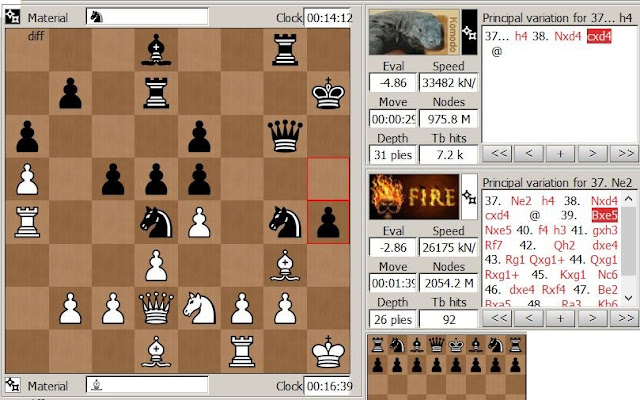 Fire tried exchanging pieces and giving its bishop, but it was not enough to stop the attack. The game was adjudicated a few moves later, PV showing that Komodo was about to win another piece. 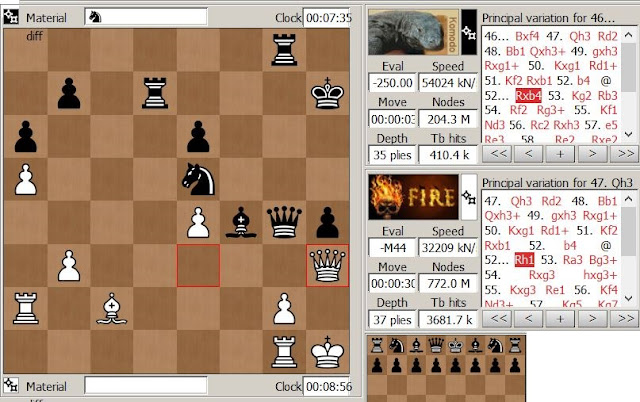 Komodo shows it can attack with fury, and not just find small cracks in endgames. It will finish first in stage 1. With this result Fire was still in danger of not qualifying, it had to wait for the last round.