After 50 games Houdini is in the lead, 7-2 and 41 draws. Komodo got its second win of the match, this time drawing the reverse. We are at the halfway point of the match, Houdini is the favorite to win but Komodo made it more interesting, not letting Houdini get too far ahead.

The Komodo development team found a compilation problem that caused the version playing in the superfinal to be slower than the previous version that played in stage 2. After a short discussion it was decided that the current Komodo version will continue playing. A full description of the subject can be found in on chessdom.

Evals were very low in game 41, both engines spent a lot of moves developing their pieces with little contact between them. The queen side pawns were removed and the engines exchanged pieces through the open files, until only N vs B were left and a draw.
Game 42 started with low evals but with a slightly different pawn structure. The queen side pawns stayed on the board and on move 23 Komodo created a central passer and gave Houdini a pawn majority on the queen side. 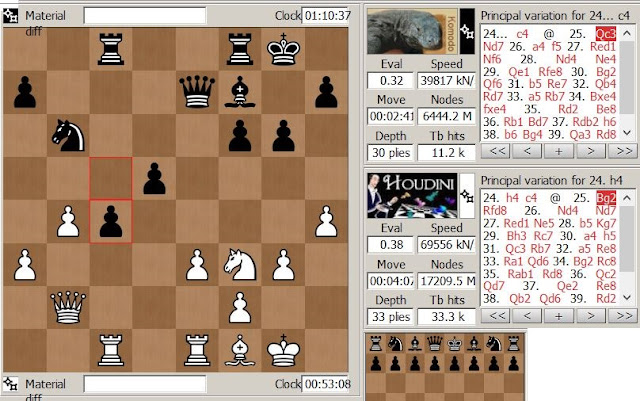 Houdini pushed its queen side pawns, with all major pieces supporting and defending. Evals gradually increased until the tension was released with exchanges, leaving only RN vs RB with one queen side passer for Houdini. 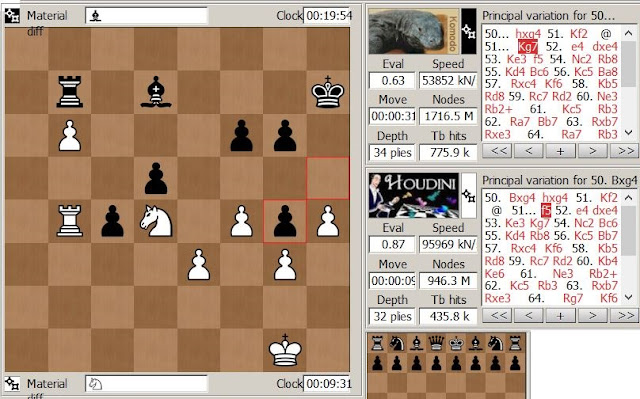 The knight was better than the bishop in this endgame. Komodo's pieces were committed to stopping the b passer, leaving Houdini to adjust the pawn structure to its favor. Houdini diffused the black central pawn pair with one exchange, captured one of the g pawns and finally gave up its passer for another central pawn. The next pawn capture was brilliant and simple. 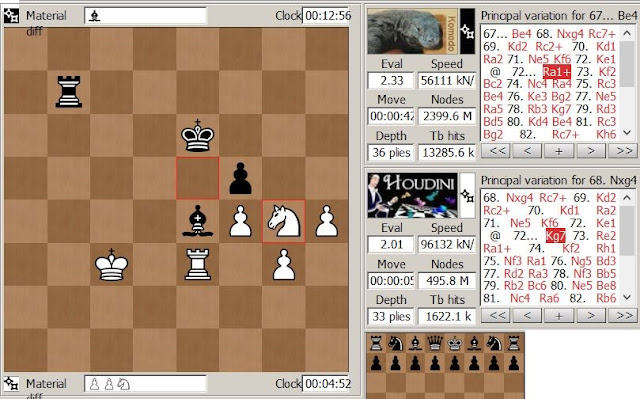 Komodo can't retake because it loses the bishop! With an advantage of two pawns it was easy for Houdini to convert the win.

Game 43 started with a series of minor piece exchanges as well as queens, that left Komodo with a pair of knights and a pawn to Houdini's bishop pair. Evals were at 0.5 and increasing. Komodo then gave a rook for a bishop and opened the queen side. After the rooks cleared away some of the pawns Komodo had a pair of connected passers, two pawns up in a RNN vs RRB position. Evals were close to 1 but got no higher. Houdini blocked the passers, captured one and gave a rook for a knight to stop the other. In the end the game reached a drawn rook ending.
The first 16 moves of game 44 followed game 43. Houdini kept its rooks and the position remained closed. The evals reached 1 like in game 43 but the engines could only shuffle. Komodo exchanged all the minor pieces and got a double rook ending. Evals came down to 0 and after taking a few pawns the engines agreed on a draw.

Komodo had a small eval advantage after the start of game 45. Then the engines started to exchange everything, leaving only QR vs QB. Evals came down and in an open board both engines had mating threats and the possibility of perpetual check. A draw was agreed after a while. Game 46 also had extensive exchanges after the start, this time the queens were first to go and the remaining pieces were RBN vs RNN. Evals were close to 0 but it took 40 more moves to get a draw.

Evals were low in game 47 though both engines were active. The kings castled in opposite directions and both faced pawn storms. The attacks on both sides turned out to be non-effective, and after the queens were exchanged and only RRN vs RRN remained the kings were safe enough. The game reached a drawn rook ending.  In game 48 Komodo did not castle and evals slowly increased  to over 0.5. Houdini gave a knight for 4 pawns leaving the black king unguarded in the center. Evals remained low while Komodo exchanged pieces, its king out of danger. The white pawns looked intimidating, Komodo just gave the knight back to get a double rook ending with Houdini a pawn up, enough to get a draw.

Komodo had a small eval advantage after the start of game 49, with two knights against Houdini's bishop pair in a mostly closed position. 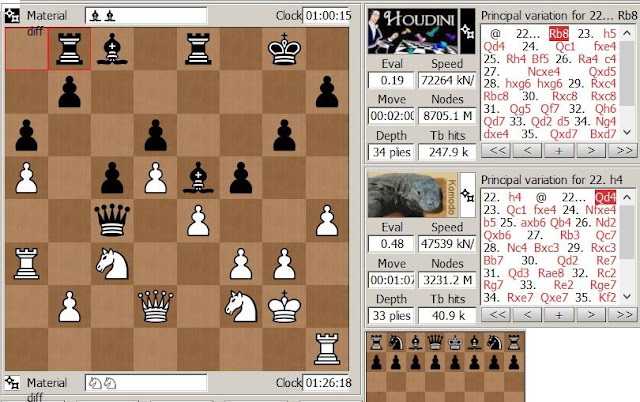 Komodo considered Houdini's 22nd move as too slow and immediately attacked the king side. As a result Houdini's king side opened up and its king tried to hide behind a white pawn. After exchanging queens the attack was over, Komodo was two pawns up with evals close to 2. Houdini still had the bishop pair advantage, but was it enough? 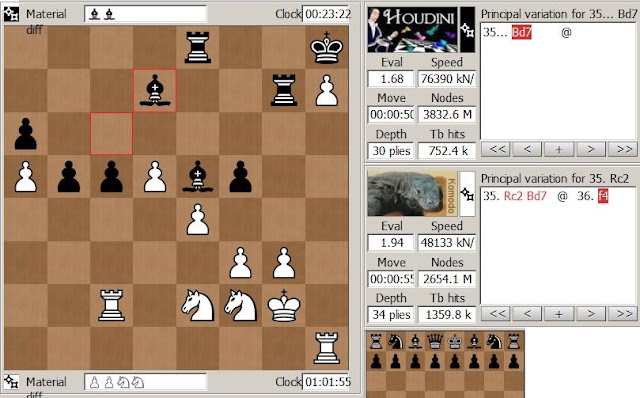 Komodo's central pawns started to march forward and Houdini was forced to give a bishop to get rid of them. Houdini had a pair of connected passers on the queen side, but with a piece down and the wrong bishop it couldn't support them. 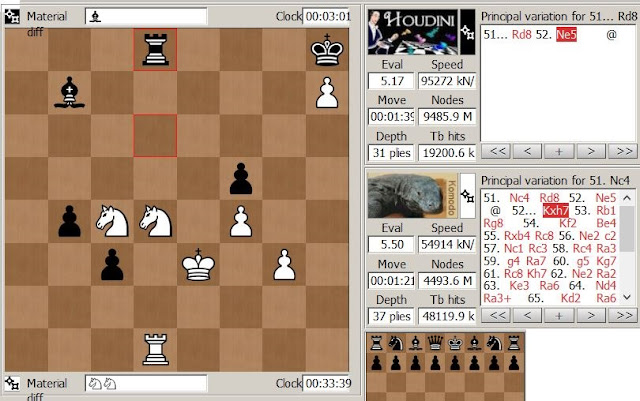 The queen side black pawns were doomed, as was the white h pawn. However the remaining white pawns were invisible to the bishop, and Komodo had the time and the extra piece to hit the last black pawn. The game was adjudicated before we could see this play out. A second win for Komodo, this time the opening was quite balanced. Can Houdini strike back immediately?
Evals stayed low in game 50. There was a complicated struggle on the queen side, full of pins and offered pieces not taken. Komodo made a real knight sacrifice to get a pair of connected passers in the center. After a series of exchanges Houdini countered with a passer on the queen side while its king was exposed. The action was over with more exchanges, Houdini gave its knight to get rid of Komodo's passers and a tablebase draw. No comeback for Houdini this time.