After 20 games Houdini leads 4-0 with 16 draws. So far Houdini is dominating the match, Komodo does not seem to find winning lines at all.

In game 11 the center and queen side were blocked by pawns, Komodo made an attempt to break the wall on the king side. Evals climbed to 0.8 for a short while, however after several exchanges only RRN vs RRB remained and the position remained mostly blocked. The evals slowly came down in an endless shuffle. Komodo sacrificed a knight for two pawns, only extending the shuffle.
Game 12 started in a similar manner, this time pawns blocked the entire board by move 22. Houdini's eval was over 1, apparently due to a space advantage. 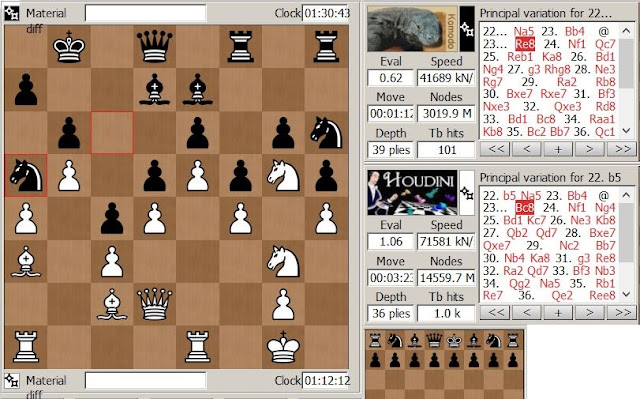 The engines started to shuffle. Essentially nothing happened for the next 65 moves except a few exchanges, evals came down and the engines had very little time left. Around move 100 Houdini sacrificed a knight for two pawns and opened up the center. Komodo saw no reason for alarm and evals remained low, but now Houdini had two connected passers that looked dangerous. 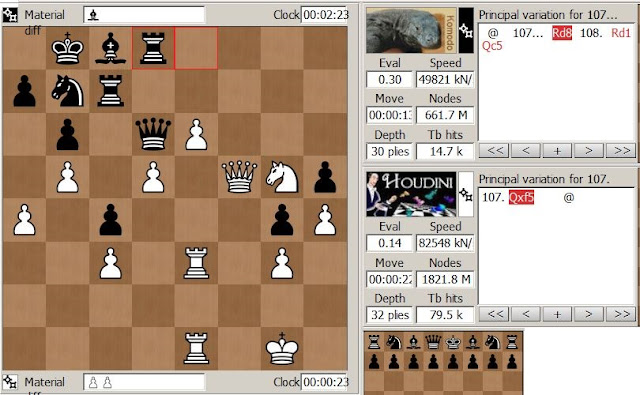 By this time the game was in blitz mode and Houdini showed its superiority. It exchanged knights and was able to advance the pawn to e7. Komodo's pieces had to stop the pawn, leaving Houdini's queen to capture the black pawns. When the white pawns started to march Komodo was defenseless. A third win for Houdini, this one was quite unexpected. This was the kind of win that Komodo usually finds, not this time.

Komodo started with a small eval advantage in game 13, about 0.5 when on move 22 it had a bishop pair to Houdini's knight pair. A massive exchange in the center left only RBB vs RNN and evals started to come down. After exchanging a pair of rooks the engines agreed on a draw.
Game 14 developed very differently. Houdini's eval started to increase from the start, reaching 1 already on move 12. Komodo had an under developed queen side, and on the king side Houdini pushed pawns threatening the black king. Houdini placed its queen on the long diagonal and opened the center, giving its queen a direct line to the black king. 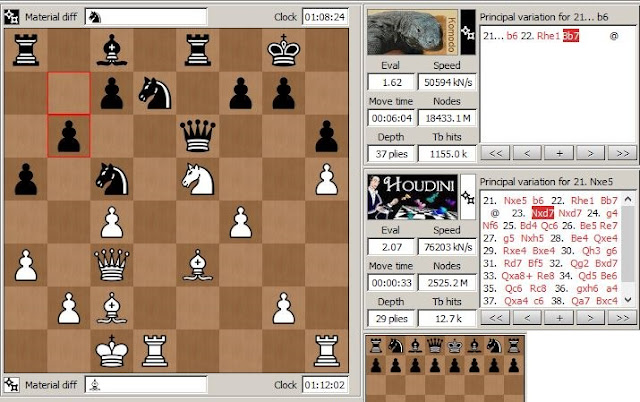 The combination of queen and bishop on the long diagonal was deadly. Komodo lost two pawns to escape being mated, evals above 2 and continuing to increase. 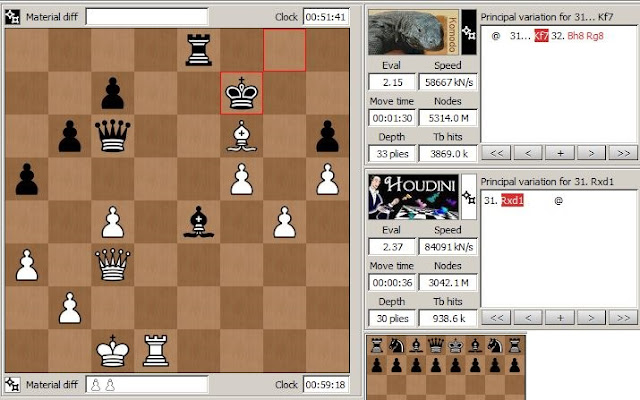 After exchanging queens Houdini used its king side pawns as a threat, capturing pawns on the queen side. The game was over quickly. Another win for Houdini in white, playing the opening much better than Komodo did in the previous game.

In game 15 Houdini exchanged queens early and the evals remained low. The game reached a RRN vs RRN position on move 26. Houdini's path to a draw was to give its knight for two pawns, leading to a RN vs R ending with no pawns for white. In game 16 Houdini created an eval advantage after the opening, but a long series of exchanges left only QR vs QN on the board with Komodo 2 pawns up, and the evals came down to 0. It took another 30 moves for the draw rule to stop the game.

Game 17 started with opposite side castling and a small advantage for black. Komodo pushed pawns on the king side and Houdini on the queen side. The position was open and both engines had attacking opportunities, but the evals stayed low. The game ended with a series of exchanges exposing both kings, a queening and finally a perpetual check. I had a live blog for game 18. Here Komodo went for a R vs BN imbalance early in the game. Houdini's king hid in the corner behind a black pawn, and the rest of the pieces were concentrated on the opposite corner with Komodo defending. Evals turned to Houdini's favor but it couldn't find a way to break Komodo's defense. Houdini managed to win a knight, and a series of exchanges led to a QR vs QB with Komodo 2 pawns up, another draw.

Game 19 started with an eval advantage for Komodo which came down almost immediately. Komodo won a pawn on the king side while Houdini attacked the queen side with all its pieces (both kings were on the queen side). After queens were exchanged evals were close to 0, Komodo's extra pawn offset by Houdini's bishop pair. The engines exchanged down to a drawn rook ending. In game 20 Houdini was quicker in the attack and evals grew quickly. Komodo had to defend the king in an open queen side and Houdini had a passer on the king side. Komodo exchanged down to a RB vs RB position with Houdini two pawns up. Evals were over 1.5 with passers for Houdini on both sides, yet somehow Komodo managed to set up its remaining pieces so Houdini couldn't advance (the opposite color bishops helped). It took 80 more moves to get Houdini to take the draw. Komodo magically escaped this game.
Posted by Assaf Wool at 2:46 PM