Stage 2 has started almost immediately after stage 1 finished, with only a short break of a few hours. The games are now a little longer with 90 minutes for each engine. Increment is still 10 seconds, so games will not be much longer than 3 hours.

The current draw rate is 20/28 (71%), quite high but to be expected with the conditions of TCEC stage 2 - high end hardware, long time controls, high quality engines. We will see how well Cato chose the openings after the reverse games of RR 2, the optimal result of a pair of games is one draw and one win.

Houdini is doing very well so far leading the table with 3 wins. Komodo is second with two wins, Stockfish is lagging behind with only one. Fire is the fourth unbeaten engine so far.

On the other side of the table the most surprising is Andscacs with 3 losses. Andscacs was unbeaten in stage 1 and there was hope it could do well in this stage as well. Andscacs was also involved in this season's most talked about game, the 'c7f7 event'. In the round 5 game against Ginkgo Andscacs got to a winning position but then threw the game away by making an illegal move c7-f7. This was the move it made earlier, c7 was empty at the time, and it was under a check with only one possible move to make. C7f7 became the most talked about subject on the chat.

The new chat should also be mentioned. Chatwing was replaced by Twitch, which takes a llittle getting used to.

Booot - Ginkgo: Booot had an eval advantage after the opening, with a bishop pair in an open position. Ginkgo offered a repetition draw that Booot avoided, but then Ginkgo took the initiative. It opened up the king side and forced exchanging pieces, until only RB vs RN were left and evals were 0.


Komodo - Fire: Komodo had an eval advantage after the opening, quite high at 0.8. Fire gave two pawns to open files, and this initiated a series of exchanges in the center. After the dust cleared only QBN vs QBB remained and evals were going down. After queens were exchange evals were at 0 until a draw was agreed.

Ginkgo - Stockfish: Stockfish found a repetition draw that included a queen sacrifice, in only 21 moves.

Houdini - Ginkgo: Houdini started in front with eval up to 1 at one point. As the game progressed more and more pieces were exchanged and evals slowly decreased, until at move 35 only BN vs BN remained with evals close to 0. It looked like Ginkgo secured a draw when Houdini's eval jumped followed by Ginkgo's. Apparently Ginkgo missed a maneuver that allowed Houdini's king to penetrate the queen side and eventually capture two pawns. This was enough for a win.

Fire - Andscacs: By move 22 only RRB vs RRB were left, Fire a pawn up and with a small eval advantage. The position became static with the white king side pawns free to move. The engines shuffled for a long time, the odd pawn move resetting the counter and time getting short. At move 80 there were a few pawn exchanges that opened the king side, and shuffling resumed. Just before the 50 move mark Fire forced a pawn capture which led to a B for R exchange and a RR vs RB endgame. Fire outplayed Andscacs in the endgame and reached a winning R vs B position. There was no clear blunder by Andscacs, was it time trouble or lack of tablebases?

Komodo - Andscacs: The center was blocked and most pieces were concentrated on the queen side. Both engines had an advanced passer on the queen side, Komodo's was better supported. Andscacs had a weak counter on the king side, then gave a rook for a knight in an attempt to block the queen side. With a few exchanges the queen side opened up, and Komodo's pieces started to dance. It is hard to describe the moves, combining threats to the king and to hanging pieces, pawn advances and making sure the king is safe. Komodo finally managed to safely exchange queens and then used its advanced pawn to reduce to a won bishop against pawns ending.

Chiron - Houdini: All the pieces remained on the board for a long time. The center and queen side were blocked by pawns and only the king side , where both kings were, had undeveloped pawns. Houdini moved its pieces to the king side, Chiron's pawns prevented its pieces from getting there and Houdini's evals increased rapidly. When Houdini opened a crack on the king side the game was over within a few moves. First win for black in this stage, second win for Houdini now in the lead.

Booot - Stockfish: Stockfish got a difficult opening but managed to draw by exchanging the minor pieces and blocking with pawns. Will it win in the reverse?

Stockfish - Komodo: Many exchanges after the opening and evals close to 0. The engines started to shuffle at move 19, it took almost 50 moves for the draw rule to stop the game.

Houdini - Booot: The position stabilized on move 26 and the engines started shuffling. It took Houdini more than 35 moves to start attacking on the king side, but then the evals started to increase quickly. Booot was able to defend, exchanging pieces when it could. In the process Houdini captured a pawn and the game reached a queen ending. Booot's king was vulnerable to check, and Houdini used this to capture a second pawn before queen exchange - at least in the PV since the game was adjudicated. Third win for Houdini, great first round so far.

Andscacs - Ginkgo: For a long time the evals stayed close to 0, Andscacs with a small advantage. Both engines had an advanced passer, Ginkgo supported its passer with its queen that was almost trapped in the white territory. When Andscacs started to attack the black queen its eval started to increase. It gave a pawn but got rid of the black passer, and after exchanging queens the rooks became strong. In a RRB vs RRN position Andscacs placed its rooks on the 7th and 8th ranks, its passer was also a big threat and evals jumped above 3. The win was close when Andscacs shocked everyone - perhaps itself too - by playing an illegal move. What ??? The move it outputted was c7-f7, this was the move it made before, now c7 was empty and in any case it was in check with only one possible move for the king Kh3-h4. Such a weird and tragic end to the game. C7f7 became a meme in the chat, probably for the whole season.

Komodo - Ginkgo: Komodo had an eval advantage of about 0.5 for a long time. The engines moved pieces around without a clear plan until Komodo started attacking on the king side. Ginkgo was tempted to take a pawn while Komodo took over the king side, evals jumping above 2. Ginkgo exchanged queens and gave a rook for a bishop, the remaining R vs B ending was won for Komodo. Komodo in second place with its second win.

Stockfish - Houdini: The queens were off the board early in the game. For a while Stockfish's eval increased over 0.5, Houdini thought it was nothing. After exchanging pieces the eval came back down in a RBN vs RNN position. It was just a matter of time to reach a draw.

Houdini - Komodo: see my live blog of this game. The game reached a RRB vs RRB position on move 17 and the engines started to shuffle. Later the engines reached an opposite color bishop ending. Really boring draw, good for both engines leading the table.

Ginkgo - Chiron: Ginkgo held on to a pawn lead and an eval advantage of about 1, exchanging down to a rook ending. Chiron had tablebase support and knew it was a draw, Ginkgo with no tablebases thought it was ahead all the way until reaching a tablebase draw.

Stockfish started with an eval advantage in a closed French opening, and things got worse for Andscacs very fast. Stockfish developed a strong king side attack, Andscacs could defend with its pawns and very few pieces. 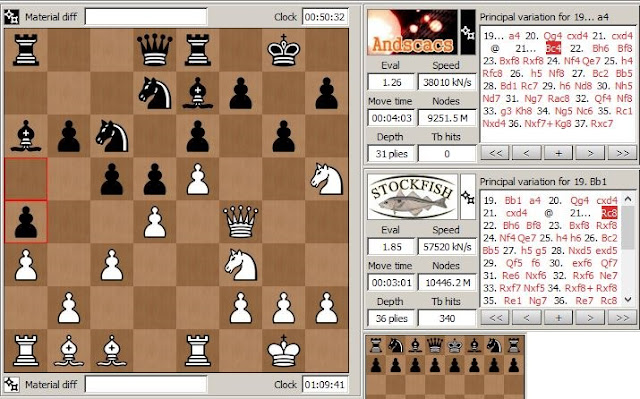 Andscacs tried to counter by opening the queen side and exchanging, the immediate threat was gone but the evals were approaching 4. Although Stockfish let one of its rooks get trapped in a corner, it was still able to take apart the black position. 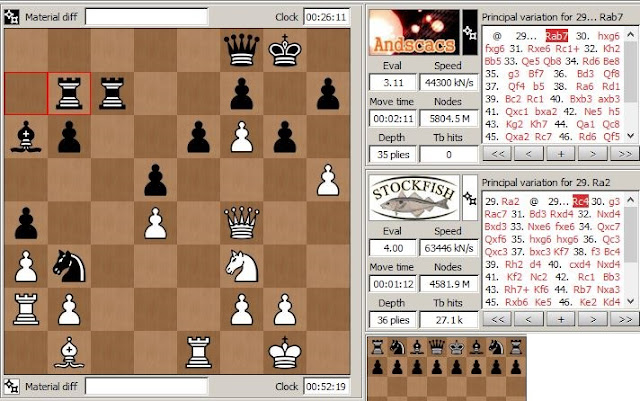 Stockfish won a rook for a knight and freed its rook, Andscacs could no longer handle the king side threat and defend the queen side pawns. 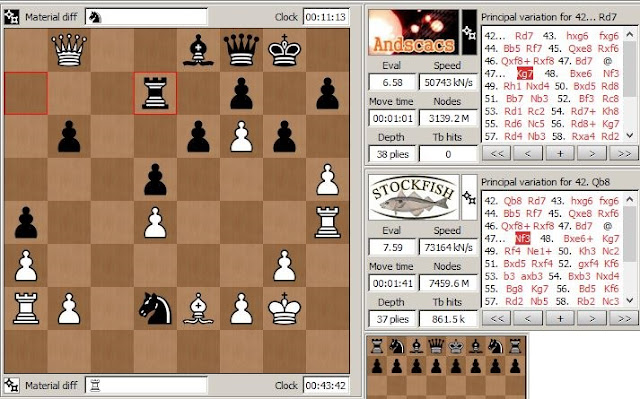 The game was adjudicated with Andscacs a rook down. This was the first decisive game of the stage and the only Stockfish win in the first RR.