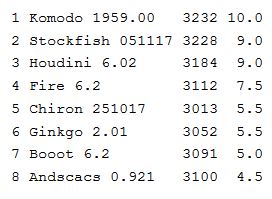 Komodo leads the table with 6 wins, Stockfish and Houdini 1 point behind. Stockfish trailed Komodo and Houdini until the last round, where Houdini's first loss of the season and Stockfish's win over Fire allowed Stockfish to catch up. This shows how close the top 3 are in the table and how any decisive game they play can have a dramatic effect on the ranking.

The 4 engines in the bottom half are very close to each other. Andscacs is last only because it crashed in the first RR while winning against Ginkgo. Without the crash they would have swapped places in the table.

Komodo - Chiron: The evals were in Komodo's favor at around 0.5 for a while, then jumped to 1 when Komodo placed a protected knight in the center of the black territory. Evals continued to increase as Komodo captured two pawns while exchanging down to a BN vs BB position, an easy win.

Andscacs - Stockfish: In the reverse game Stockfish had a crushing attack on the black king right out of book. Here Stockfish as black defended well and was never in danger at all, its eval down to 0 very quickly. Stockfish played this opening better than Andscacs, but it needs wins to improve its position in the table.

Houdini - Andscacs: Andscacs chose a different line of defence compared to the reverse game. Houdini's eval stayed at around 0.7 for a while, but jumped above 2 when Andscacs took two pawns on the queen side while abandoning its king to a crushing white attack. It had to get its queen back in a hurry, and as a result Houdini won a bishop. The resulting RRN vs RR position was an easy win for Houdini, though we didn't get to see it played out.

Stockfish - Ginkgo: Stockfish had an eval advantage of about 0.7 after the opening. Ginkgo made an inaccurate move and the eval jumped above 2. Stockfish gave a pawn and destroyed the black pawn structure, then exchanged down to a rook endgame with a passer on the 7th rank. After this win Stockfish is still in third place, 0.5 points behind Komodo and 1 point behind Houdini.

Komodo - Booot: Komodo played the opening better and had a better pawn structure and an eval advantage of over 1. Booot captured a rook for a knight but Komodo took over the center with its knights and had strong queen side pawns. Booot gave the exchange back but it was already lost, the game reached a RB vs RB position with Komodo two pawns up and winning.

Ginkgo - Houdini: Ginkgo's eval was around 1 for over 30 moves, Houdini's reached 0.8 yet it still managed to get a draw in the game. After many exchanges only RB vs RN remained with Ginkgo a pawn up, not enough. The fact that Ginkgo doesn't have tablebase support is probably the explanation.

Houdini - Chiron: Houdini had an eval advantage from the start. For a while it held at around 0.7, as the position opened and after a few exchanges the evals started to increase. It was not clear how Houdini could penetrate the pawn wall. After exchanging down to a QBN vs QBN position Houdini opened a file on the king side, and used the file to get its queen behind the pawns. Chiron's remaining pawns were easy targets and Houdini's passers were enough to get a win. Houdini wins this opening in white and in black, first 2-0 of the stage.

Stockfish - Booot: Booot crashed on its first move, disappointing for the tournament.

Komodo - Stockfish: Komodo forced the black king to move early in the game so Stockfish couldn't castle. Nevertheless Stockfish equalized the game, rapidly exchanging pieces until only rooks remained. The game ended in a perpetual check. Still only draws in the top 4.

Ginkgo - Komodo: The evals became negative early in the game and Komodo took over the initiative. After opening the queen side and exchanging all rooks the position became static, Komodo trying to find a hole in Ginkgo's defence without success for a long time. When Ginkgo moved a pawn, the draw counter was reset and Komodo's queen infiltrated behind the pawn line. Then one inaccurate move was enough for Komodo to bring down the whole fortress. The game reached a QBN vs QBN position with the white king exposed to attacks, after most pawns were gone Komodo went a pawn up creating a critical advanced passer. Almost 30 moves after the inaccuracy Komodo reached a winning 6-man B vs N position. Ginkgo missed this line with no tablebase support.

Fire - Booot: Fire outplayed Booot in the opening, winning a pawn and exposing the king to attacks. Most of Booot's pieces were busy on the king side defending its king, Fire used the opportunity to capture a second pawn on the queen side. Then it was only a matter of exchanging down to a RN vs RN position and a straightforward win.

Houdini - Stockfish: see my live blog for this game. Houdini kept a small eval advantage for a while, Stockfish's eval was at 0 much sooner and it kept seeing repetitions in its PV. After exchanging all the bishops the engines shuffled with the major pieces and evals became in Stockfish's favor, though always close to 0. A series of exchanges that started with a queen sacrifice led to a N vs R ending and a draw. Houdini and Komodo lead Stockdish by 1 point before the final round of this RR.

Stockfish - Fire: Stockfish had an eval advantage from the opening that gradually increased. All the pieces were concentrated on the king side, Fire's king was more exposed to attacks. A sequence of captures simplified the position and left a RR vs Q position. Stockfish's eval was over 8, Fire took longer to realize it was lost. First loss to Fire in the stage, Stockfish catches up with Houdini in joint 2nd place.

This game produced one of the greatest 'Wow' moments of the season. Unfortunately I missed the live game, though the chat replay is available on the new twitch chat.

The start of the game was nothing special. Evals were low with a small advantage for white. Komodo gave a pawn to open up the black king side, Houdini was defending well with most pieces on the board. 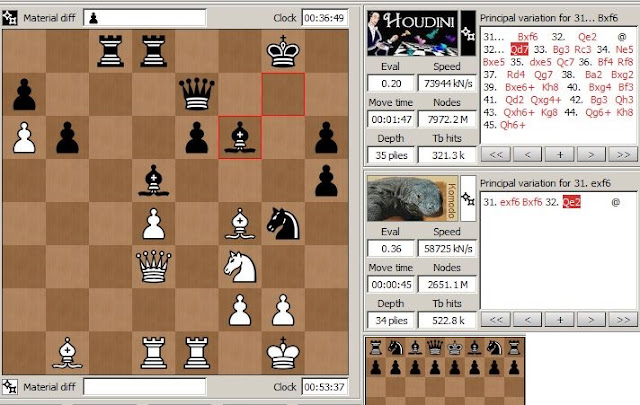 There was some tension on the board with threats made by both engines. It appeared to clear with the minor pieces exchanged off the board. On move 48 Houdini took the last white bishop, evals still very low. 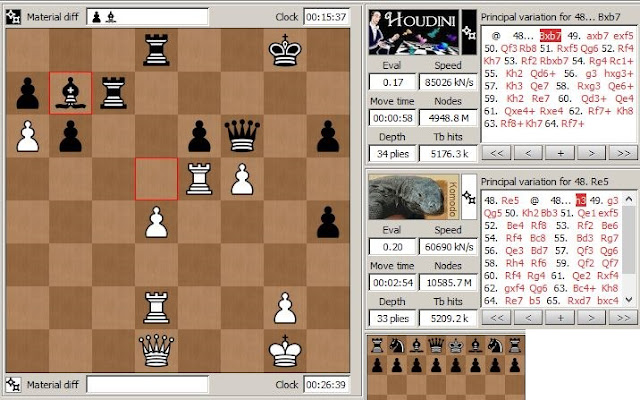 Komodo took back the bishop with eval 1.44! Where did that come from? Houdini continued to play, taking a second pawn and eval still low, yet Komodo insisted and even increased its eval a little. It took Houdini four moves to realize it was in big trouble. The d passer became a serious threat, and combined with threats on the black king this was impossible to defend. For a minute Houdini thought it could get out using perpetual checks. 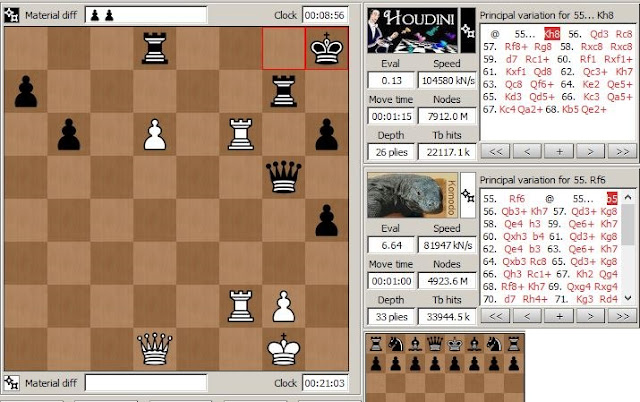 Komodo was saying 'sure win', and Houdini was saying 'easy draw'. Unbelievable. It was Komodo who had it right, a few moves later the game was over in a queen ending, no way to avoid the d pawn promotion.