In game 49 Stockfish had advanced passers on the queen side while the evals stayed close to 0. Stockfish was able to march one pawn to the 7th rank where Komodo blocked it. After queens were exchanged Komodo countered with pawns on the king side, both engines ran out of ideas and agreed to a draw.
The reverse game was much sharper. Stockfish sacrificed a knight for pawns, then broke through the center and threatened to win material with a QR skewer by a bishop. Komodo chose to give its queen leading to a RBB vs Q and pawns imbalance. Stockfish's eval was at 0 while Komodo thought it had a small advantage. It took a few exchanges and 30 more moves for Komodo to see that it could not penetrate Stockfish's defense.

Game 51 started with a small eval advantage for Stockfish. Both engines played moves that were expected in their opponent's PV and evals stayed low until Stockfish's pawns advanced on the king side. 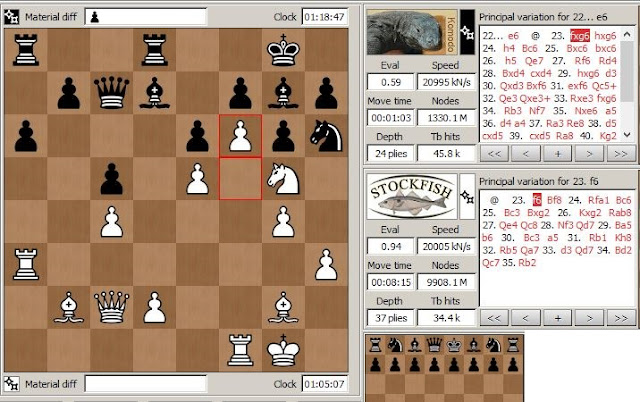 Stockfish's king was exposed but Komodo was under too much pressure to do anything about that. With a bishop and knight trapped on the king side Komodo could only wait while Stockfish arranged its pieces for an attack. With the black queen on the opposite side of the board Stockfish opened up the king side. 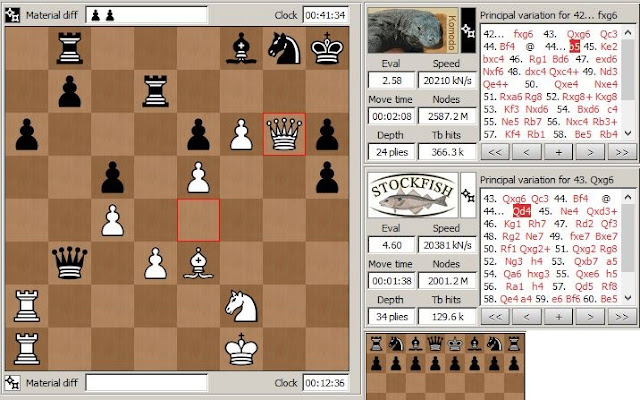 The evals shot up as Komodo could not defend its king without losing material, especially after f7 was played. Stockfish won a few moves after that.
The reverse game 52 repeated the opening moves and the evals stayed low. Komodo chose to keep its king side pawns close to the king and Stockfish's king looked secure. Then Komodo managed to trap a knight and Stockfish took two pawns for it, leading to the following position: 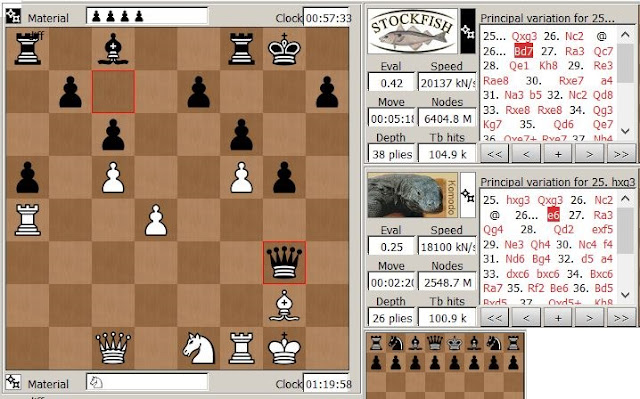 Komodo had an extra knight while its king had no shelter. On the other hand Stockfish's pieces could hardly move (except the queen). Stockfish spent several moves to free its bishop while Komodo advanced its knight to a strong forward position. Komodo's eval gradually increased, while Stockfish's eval increased much faster, almost 2.5 as the bishops were exchanged. Then for a moment it seemed that Komodo blundered the win, Stockfish's eval dropped below 1 and it anticipated a drawn ending. Komodo had other plans as it threatened a mate in 1. 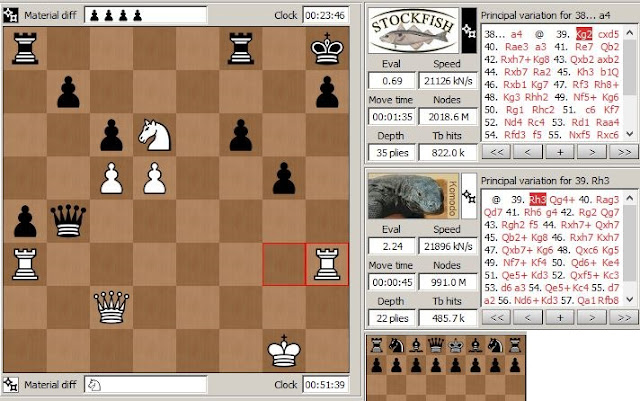 Stockfish was completely surprised, it immediately saw that the game was lost with evals shooting above 4. The game was over a few moves later. A rare Komodo win, and very uncharacteristic behavior for Stockfish's eval function.