Welcome to part 2 of my look-back at the Season 6 superfinal. In this part I cover games 9-16. After the first 8 games Stockfish was up by 2 wins, with 6 draws.

The opening had a small bias for white and Stockfish gradually increased the eval advantage. After 21 moves the material was balanced but Stockfish was threatening f7. 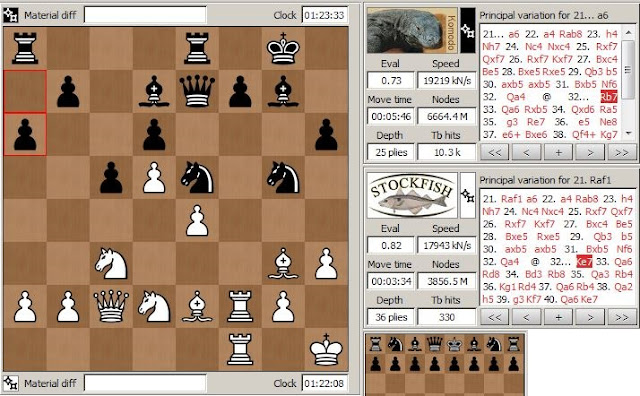 It looked as though Komodo had it covered but the two knights were quickly chased away. Stockfish then initiated a combination that resulted in a Q vs RR imbalance. 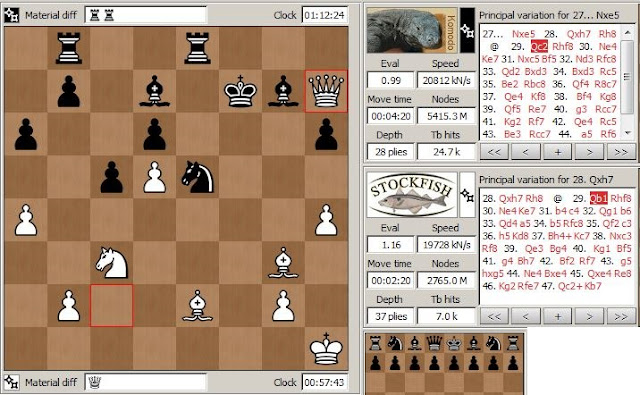 With black's king exposed in the center the white queen could attack quickly from both ends of the board. Gradually Stockish converted this advantage into material, first pawns, then a bishop for rook exchange, and the game ended after the second black rook was exchanged for a knight.

The reverse game was very different. Stockfish as black neutralized the king side quickly and castled, while Komodo castled long, and the action concentrated on the queen side. After queens were exchanged and the pawns stabilized both engines reached a 0 eval and the game was declared a draw. So, 3-0 Stockfish and 7 draws.

In game 11 Stockfish launched a strong king side attack, with eval rising above 0.9 (Komodo peaked at about 0.5). Komodo defended well, first stopping the attack and exchanging material, and then finding a perptual check for the draw. In the reverse game it was again Stockfish that had a slight advantage as black, but it was not enough for a win.

Game 13 reached a NN vs BN endgame on move 27, with the evals close to 0 throughout the game, resulting in a quick draw. The pieces stayed on longer in game 14 and Komodo had some hopes with a small eval advantage. After Komodo took over the 7th rank Stockfish responded by trading most pieces and securing a passed pawn. This threat forced Komodo to draw with perpetual check even though it was a pawn up.

In game 15 Stockfish had a small eval advantage for a while, but with only QRB vs QRN with many pawns left at move 23 the game looked to be heading for a quiet draw. For a short period Stockfish got excited with eval jumping to 0.5 and even 0.9 for one move, but Komodo remained cool and defended against any pawn breaks or king attacks. When the queens were exchanged the evals dropped to 0, and while Stockfish had a passed pawn on the 7th rank Komodo ended the game by check repetition. Game 16 developed along similar lines with the same piece composition for the endgame. Here there were no attempts to break the pawn lines and the game ended quickly in a shuffle with 0 evals.