== UPDATE 8th October 2017 ==
Another delay in the season start. In a post on chessdom the new date is "next week", on the Facebook page it is "around Friday" (the 13th...) and I've seen the 15th mentioned on the chat. The cause for the delay is some "big drama" (Facebook quote again) behind the scenes with the server, but as a result the season will start with a new improved server with 44 cores. This is good news for season 10, I don't mind the delays too much, just get everything ready and let the games begin.

You can also watch Cato - aka Nelson Hernandez - explain the opening selection procedure for season 10.

== UPDATE 3rd October 2017 ==
The latest news is that the season will start on October 10th, see announcement on chessdom.

TCEC season 10 has been announced on chessdom and is due to start in October, about 1-2 weeks from now. The TCEC chat volume is slowly increasing, with the usual participants starting to show up, as well as engine developers and of course Cato. The excitement is definitely building up.

There will be 24 engines in this season's competition, including three new to TCEC: Booot, Nemorino, and Wasp. The obvious favorites continue to be Stockfish, Houdini and Komodo, which will try to show that their new and updated versions are better than last season's as well as their rivals. Other engines that did well last season are Fire, Gull, Andscacs, Jonny and Ginkgo, it will be interesting to see how well they perform this season.

The shorter time controls will be a challenge for me, it's hard to follow so many games every day and to find the time to write about the more interesting ones. I will do my best to keep up. I plan to post updates about the games as well as statistics reports for each stage, similar to my posts during the last two seasons.

Let's hope we have a successful and exciting TCEC season, with many interesting games, a little controversy, a reasonable draw rate, and very few technical problems.

Posted by Assaf Wool at 3:28 PM No comments:

Email ThisBlogThis!Share to TwitterShare to FacebookShare to Pinterest
Labels: Season10

In game 53 there were many exchanges after the opening with only RRB vs RRB remaining on move 18. Stockfish had a small eval advantage and better placed pieces, and a potential pawn advantage on the queen side. 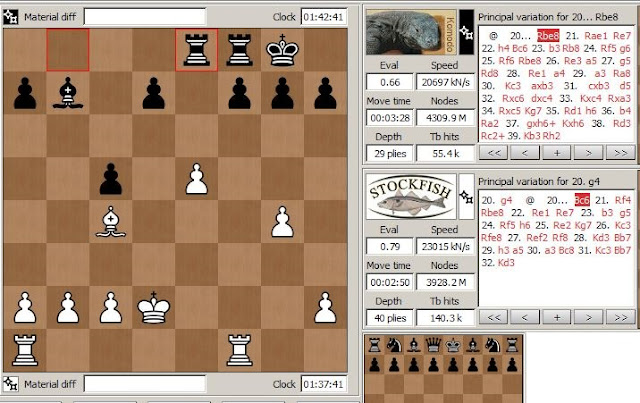 Komodo's rooks remained passive and its king could not leave the king side, while Stockfish's king moved up the queen side. After exchanging bishops Stockfish's eval advantage was over 2. 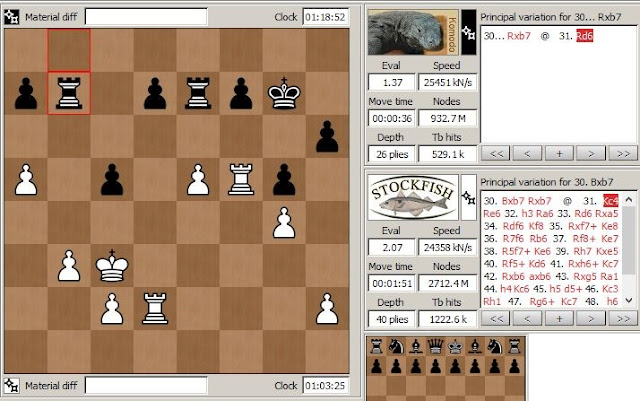 Stockfish captured the black c pawn and Komodo's defense crumbled. After exchanging a few pawns and a pair of rooks Stockfish had two advanced passers on the queen side which were decisive.

The reverse game 54 started in a similar sequence of moves, again with only RRB vs RRB left on move 19. Komodo had a small eval advantage and an advanced passer, but since the bishops were of opposite colors the position was more drawish. 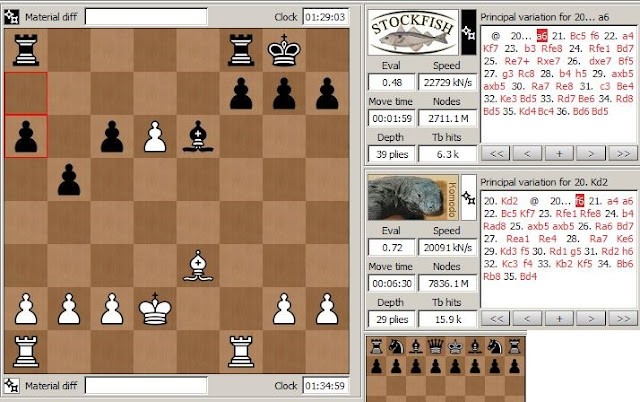 There were a few pawn exchanges which simplified the position. Komodo held to its strong passer and doubled rooks on the e file, Stockfish tried to defend with only a little room to move. The evals climbed above 1 for white, Stockfish's eval significantly higher. 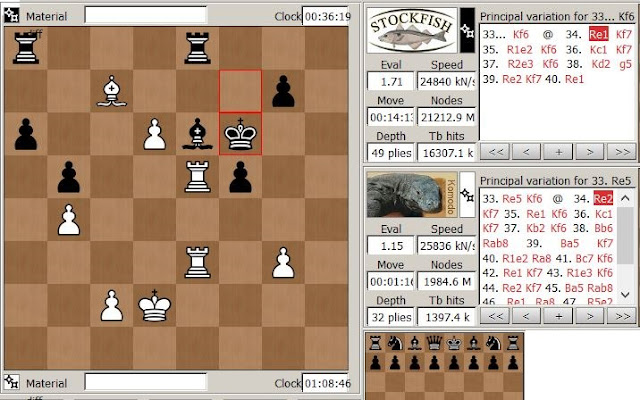 There were several shuffling moves and it seemed that Komodo could not find a way to break through the black defense. Stockfish then advanced its g pawn, and in the new position Komodo found a path to victory. Stockfish sacrificed a pawn on the king side to gain a passer on the g file, but with Komodo controlling g1 with its bishop and with a pawn advancing on the f file the game was soon over. What would have happened if Stockfish continued shuffling? My guess - a draw. Stockfish prepared for a threat Komodo did not see.

Game 55 started with many exchanges that left RBN vs RRN after move 21, Stockfish an exchange down but with two more pawns. The evals were a little in white's favor but after exchanging a pair of rooks the evals dropped to zero. The pawns advanced as far as they could and the position became static, ending the game in a repetition draw.
The reverse game started similarly, reaching a RBN vs RRB position after move 21 and Komodo with an extra pawn. The evals were close to zero when Komodo chose to give back the exchange, it had an advanced passer and a centered king in a RB vs RB ending. Stockfish had no problem holding its position, it took another 20 moves but the game ended in a draw.

Game 57 was a 22 move miniature that ended in a repetition draw, while Stockfish was two pawns down. It is interesting to note that Stockfish saw the outcome in its PV starting from move 10.
In game 58 Komodo avoided an early queen exchange, Stockfish had a pawn advantage in a closed position. After a few exchanges the position opened with QRB vs QRB remaining, and the evals dropped to zero. Komodo gave a pawn and ended the game with a perpetual check.

After 58 games Stockfish leads by 13-5 with 40 draws. There are only 6 games remaining so Stockfish will win the match, regardless of the results of the last games.
Posted by Assaf Wool at 10:09 AM No comments: