Only two rounds to go, Komodo has a 0.5 lead at the top and very good chances of finishing first. Houdini and Andscacs have qualified for stage 2, one of them will finish third.

The real drama can be found at the other end of the qualifying race. Chiron at 9th can reach 14.5 points with two wins, reasonable since its opponents are Fruit and Gaviota. Ginkgo and Fire have an advantage but they have to meet Houdini and Komodo respectfully, a loss can mean they need a tiebreak. Gull only managed 3 draws in its last games. It still has to play Andscacs and Bobcat, it is also in danger of needing a tiebreak. Booot has to face Ginkgo and Hannibal and it is also not safe. Anything can happen in the last two rounds.

Gull - Fizbo: The evals increased a little after the opening to about 0.4. As the engines exchanged pieces the evals came down to 0 and stayed there. The engines chose to end the game with a 3-fold repetition rather than continue playing a QBN vs QBN position. Gull's chances of qualifying are still good, Fizbo is desperate for wins.

Andscacs - Fire: Fire equalized quickly, evals were at 0 from move 21. The game reached a RN vs RB position and a draw when the pawns stopped moving. An important 0.5 point for Fire, Andscacs slips to fifth after Ginkgo wins.

Komodo - Hannibal: Komodo had an advantage from the opening, Hannibal was able to hold for a while but was soon outplayed. Komodo slowly strangled Hannibal until it could hardly move, when a rook invaded the 7th rank it was game over. Almost certain that Hannibal will not qualify.

Houdini - Chiron: Houdini started with an eval advantage, and Chiron had a hard time trying to hold the position. For over 30 moves Chiron was doing ok, it had a passer on the queen side while Houdini had a strong pawn chain on the king side and a central passer. The engines started to shuffle while the evals slowly increased to over 1. Chiron's pieces were defensive and passive, and when the position opened up and pieces were exchanged it was a pawn down in a double rook ending. It took a while but Houdini won with no problem. Now Chiron needs to win its remaining matches. Booot has better chances to qualify especially after its win against Vajolet2.

Chiron - Booot: This game could have been critical in the qualification chances of both engines. What we got was a very boring game, both evals were close to 0 throughout the game. The engines exchanged down to a RRB vs RRB position which then turned into a drawn rook ending. Booot improved its chances to qualify, Chiron must win games to have a chance.

Jonny - Houdini: The engines opened up the queen side and used the opening to exchange pieces. The evals stayed close to 0 and the game ended in a repetition in a QBN vs QBN position. Jonny is almost out of the race.

Andscacs - Fizbo: Andscacs had an advantage from the opening, with a blocked center and very little room for black's pieces. Fizbo gave a pawn to open the queen side but the counterattack was not effective. After files were opened and pieces exchanged Andscacs was two pawns up with a passer on the 7th rank. The game ended in a QN vs QB position, with the PV showing that Fizbo has to lose a piece for the passer. Fizbo is also effectively out of the race, only theoretical chances remain.

Houdini - Hannibal: Hannibal was a pawn up, but the QRN vs QRB position became static with only a few pawn moves and shuffling. After many moves the position opened up a little but the evals remained close to 0. A draw was agreed when the engines finally lowered their evals enough. With this draw Hannibal is out.

Booot - Jonny: There were many exchanges after the opening, leading to a RRB vs RRB position at move 26. To verify a draw Jonny exchanged a pair of rooks and gave its bishop for the remaining white pawns. Booot had no tablebase support and was not aware that with only RB vs R it couldn't win. Jonny is out, Booot with a good chance still for the top 8.

Gaviota - Stockfish: a very short repetition draw after 21 moves. With this draw Stockfish will probably finish the stage second after Komodo.

The game had a wild start, Komodo gave its Queen for 3 pieces by move 12. 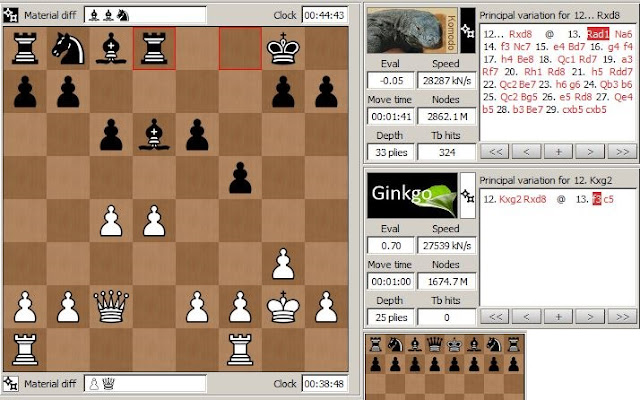 This is the sort of imbalance Komodo knows how to play. Komodo moved its pieces with a lot of patience, evals gradually increasing. Ginkgo only had major pieces and could not afford exchanging them for a minor piece. After closing both sides of the board Komodo could plan where it wanted to hit. 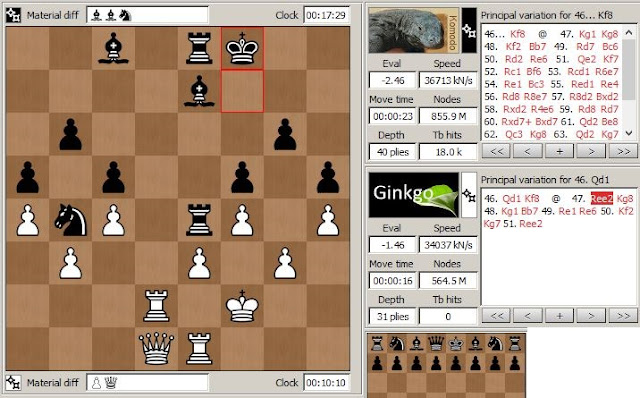 In desperation Ginkgo gave a rook for a bishop and exchanged down to a Q vs RBN game. It managed to get a few pawns but once the black pieces were free to attack Ginkgo's king the game was soon over. Impressive game for Komodo.