After 90 games Leela leads 12-10 with 68 draws. Twice Stockfish won a game and got within one win. Twice Leela immediately won the reverse game. Only 10 games to go, Leela is getting closer to winning the match.

Games 81-82 started with a 24-ply book in the King's Indian defense, Samisch, Bronstein variation, with a Q vs BBPP imbalance. There were many exchanges after the start of game 81, on move 34 the game reached a Q vs RB position. Each engine had 3 pawns, all on the king side. Leela built a fortress and kept the white king away, Stockfish could not make any progress and the game was adjudicated on move 76. More pieces stayed on the board in game 82. Stockfish pushed pawns on the queen side until they met white pawns in a stable formation. After some shuffling Leela traded its queen for a rook and knight and the game reached a R vs B ending with Leela 2 pawns up on move 43. Evals were close to 0 and the engines traded pawns until the game ended in a tablebase draw.

Evals were over 1 at the start of game 83. Stockfish pushed pawns on the king side facing the black king, Leela did the same on the queen side facing the white king. Stockfish gave a pawn and exchanged a pair to open the h file. Its eval jumped to 2.5 when it doubled queen and rook in the open file. 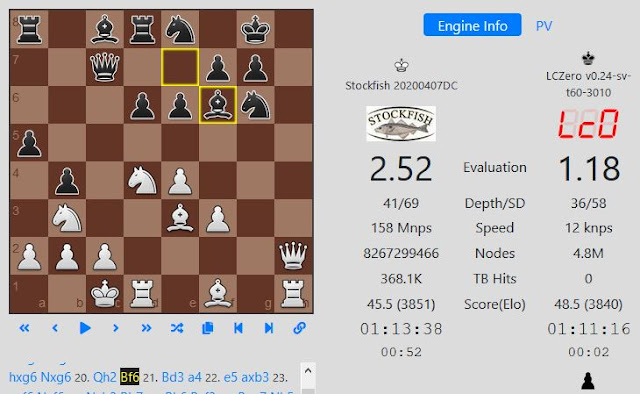 Leela ignored the danger to its king and countered on the queen side. Stockfish traded pawns on the king side to open another file, then it started offering pieces but Leela couldn't afford to capture since any wrong move meant immediate collapse. 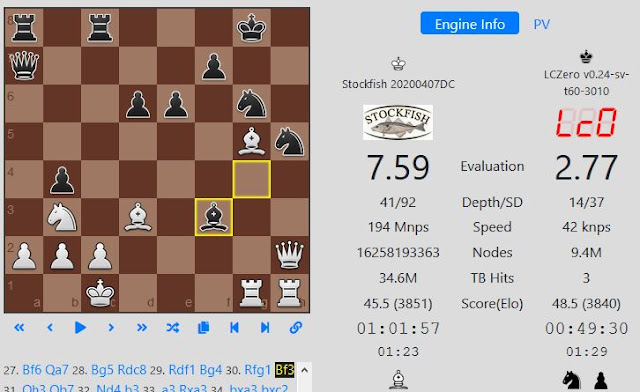 In desperation Leela sacrificed a rook to open the queen side and tried to attack the white king. In a spectacular series of exchanges Stockfish gave some material back and then captured the black queen. The game ended with mate on the board on move 46.

In game 84 Leela pushed a pawn to h6 but the king side file stayed closed. The pieces concentrated on the queen side, where Stockfish had two isolated pawns. After some shuffling the engines reduced to a RRN vs RRN position and Leela went a pawn up. Evals were over 1.5 but Stockfish's position looked solid enough. 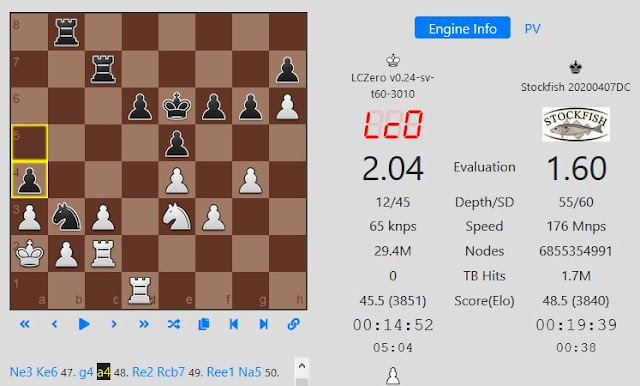 Leela didn't seem to know what to do next. The engines shuffled for more than 80 moves, with a few pawns moves to reset the draw counter. Both engines were playing on increment and evals slowly came down. On move 133 Leela stopped the shuffle and gave a rook for a knight and pawn. At first evals didn't change too much, then Stockfish grabbed a pawn and evals jumped over 2. The white rook moved to the 7th rank and within a few moves captured two black pawns. 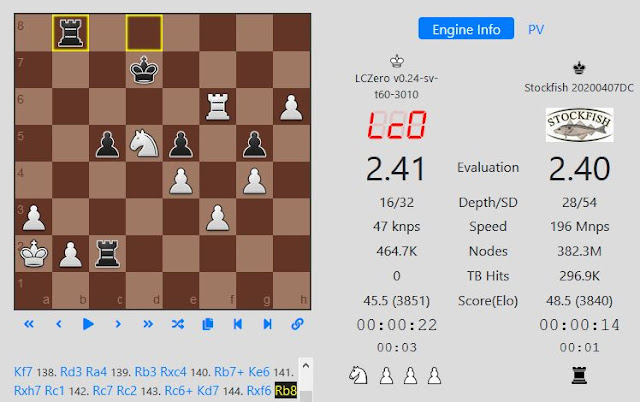 Stockfish tried to counter and threatened the b2 pawn, Leela covered with its knight while its rook captured more black pawns. Leela was 4 pawns up and it started pushing its pawns forward. Eventually Stockfish lost a rook for one of the passers, the game was adjudicated a few moves later. Did Stockfish blunder or was Leela winning the whole time? Two white wins in this game pair, no change in Leela's lead.

In game 85 there were a few exchanges until move 25. Leela pushed pawns on the king side and its king was left without pawn support. Then a series of exchanges opened files on the queen side and cleared the board, Stockfish went a pawn up and Leela placed a rook on the 2nd rank. To avoid back rank threats Stockfish gave a bishop and ended the game in perpetual check. In game 86 all the pawns stayed on the board and the engines played behind the pawn lines. A pair of knights was exchanged on move 21, the queen side stablilized and Leela's eval went over 1. There were a few pawn exchanges after move 39, Leela created a passer on the queen side and a file opened on the king side. Leela couldn't break through the king side, Stockfish's eval dropped to 0. Leela shifted to the queen side and pushed the passer to the 7th rank. Leela shifted back to the king side, Stockfish traded its queen for two rooks and only QB vs RRB remained. Leela's eval also dropped, the engines traded passers and pieces and the game reached a Q vs RB ending and a tablebase draw.

Games 87-88 started with a 4-ply book 1.e4 g6 2.d4 c6. Game 87 transposed into a popular line in the King's Indian defense, Orthodox variation. There were no exchanges after the start, the center was blocked and the engines played behind their pawn lines. Evals came down and it looked like the engines would settle for a draw. After move 33 there were two minor piece exchanges and a file opened in the center. The game was close to adjudication but evals moved away from 0 a little. Stockfish went a pawn up, then a pair of rooks was exchanged, and suddenly Stockfish's eval jumped to 3. Leela saw it was in trouble, in a series of exchanges the engines reduced to a knight ending. 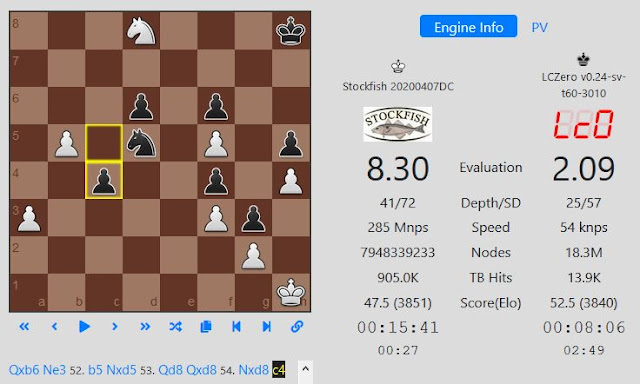 Both engines had connected passers, Stockfish had the advantage since its passers were more advanced, further from the king and and more difficult for a knight to handle. Both kings moved to block the opponent's passers. Stockfish captured one and allowed Leela to capture a pawn on the king side. The two white passers advanced and Stockfish saw it was winning. 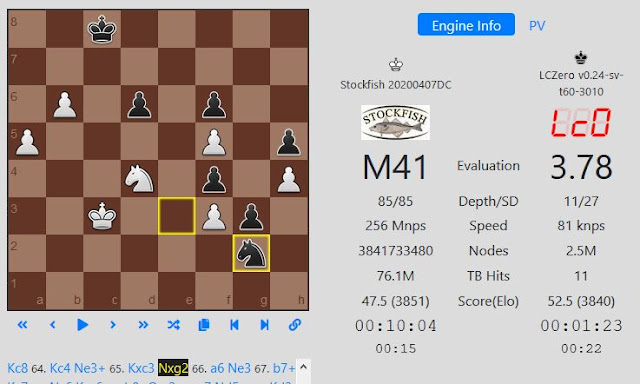 Leela stopped one passer but Stockfish sacrificed its knight and promoted the other passer to a queen. The game ended in mate soon after that.

In game 88 the engines played a less popular line in the Modern defense. The engines opened a file on the queen side and later exchanged a pair of rooks, there were a lot of moves behind pawn lines and very few exchanges. Leela's eval was over 1, Stockfish stayed calm until Leela moved a rook and knight forward on the queen side. Stockfish exchanged pieces to get rid of the knight, the game reached a RBN vs RBN position on move 44. 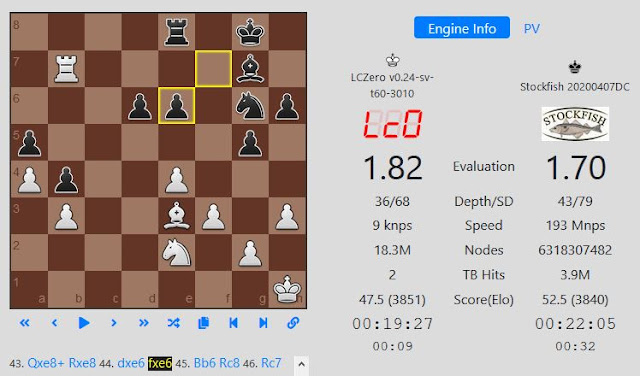 Many black pawns were weak, Stockfish had all its pawns on light squares where the black bishop can't attack them. The white rook on an empty 7th rank was another advantage. Stockfish exchanged rooks, Leela could have taken a pawn on the queen side but decided to switch to the king side. Leela went a pawn up, cleared the king side black pawns and created a passer. 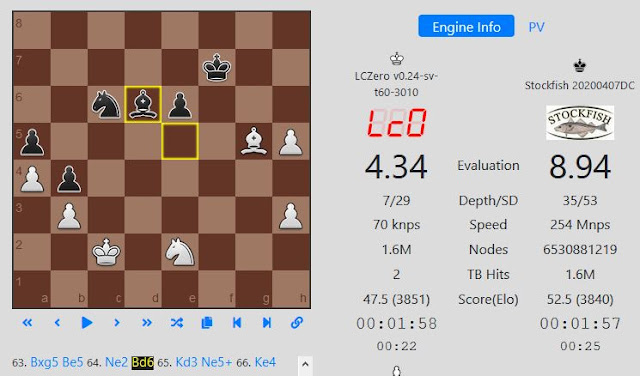 As usual Leela was not in a hurry to push its passer forward. Instead Leela allowed Stockfish to capture one of the h pawns while it captured the queen side pawns. Stockfish gave its knight for a pawn and the game was adjudicated. Another game pair with two white wins, no change in Leela's lead.

Games 89-90 statrted with white down a knight for a rook, with the black king vulnerable on dark squares, and with a white pawn on f6. In game 89 there were many exchanges after the start, Leela gave the material back to stop the attack on its king and only RB vs RN remained on move 26. Evals were close to 0, the engines captured pawns slowly until there was only one black pawn left, and the game was adjudicated. In game 90 Leela castled long and Stockfish weakened the white queen side pawns. Stockfish allowed a white bishop on h6 and captured the f6 pawn. The black queen moved forward on the queen side, when Leela threatened mate on the king side Stockfish ended the game with perpetual check.