After 50 games Leela leads 9-7 with 34 draws. No change in Leela's lead, the last 10 games
were all draws except one biased opening with two white wins. At the halfway point of the match Leela has a good chance of winning but anything can still happen.

Game 41 started with evals around 1.5. There were no exchanges in the first 30 moves except a pair of bishops, the center was blocked and the engines moved pieces behind their pawns. On move 34 the engines openes a file on the queen side and started to exchange pieces. Then a file opened on the king side and after more exchanges the game reached a rook ending on move 55. Stockfish was a pawn up but the position was drawn, Leela's evals stayed away from 0 and the game ended in a 50-move draw. In game 42 evals were again high at the start, and there were no early exchanges. Leela had a space advantage and it placed a knight on b6, further restricting the black pieces. The engines exchanged minor pieces and evals increased over 2. On move 36 the engines exchanged a pair of pawns, Leela's eval was over 3 and the engines started shuffling. Leela had a few pawn break options but it delayed them for 45 moves. Evals dropped below 2, another pawn pair was exchanged and shuffling resumed for almost 50 moves. After the next pawn move the black queen moved forward and the game ended in a check repetition.

Stockfish's eval was around 2 a few moves after the start of game 43. Stockfish castled long, Leela chose not to castle and it moved all its major pieces to the queen side. Stockfish made sure its king was safe, then it gave a rook for a knight and opened the center. 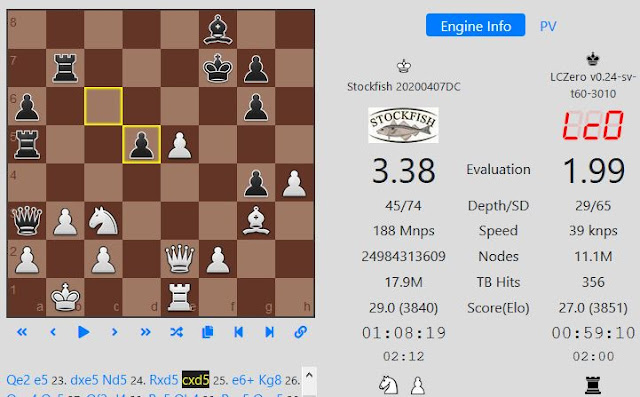 The black king was in danger and Leela quickly reduced to a BN vs RB position. Stockfish was two pawns up with a strong passer on e6, after exchanging bishops Stockfish gave a pawn and created a second passer on the queen side. It already saw the mate coming. 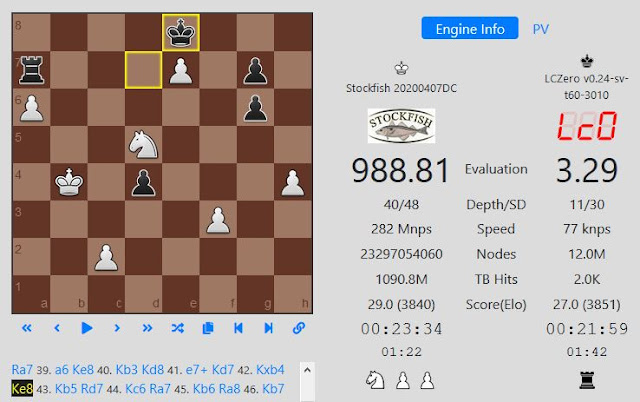 The white king came forward and Leela couldn't stop both passers. The game ended with mate on the board.

In game 44 Leela castled long and Stockfish castled short, Stockfish traded both its bishops for white knights and evals started to increase. Leela pushed pawns on the king side, one pawn getting to h6. Stockfish had isolated pawns on the queen side, Leela applied more and more pressure until it was able to capture a pawn on move 47. 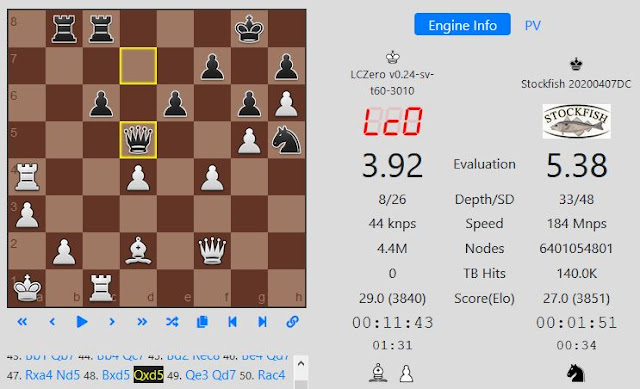 The a pawn was a dangerous passer, and Leela had a mate threat on the king side. Stockfish got rid of the thorn pawn, at the cost of losing another pawn on the queen side. After exchanging queens only RRB vs RRN were left, Leela two pawns up. 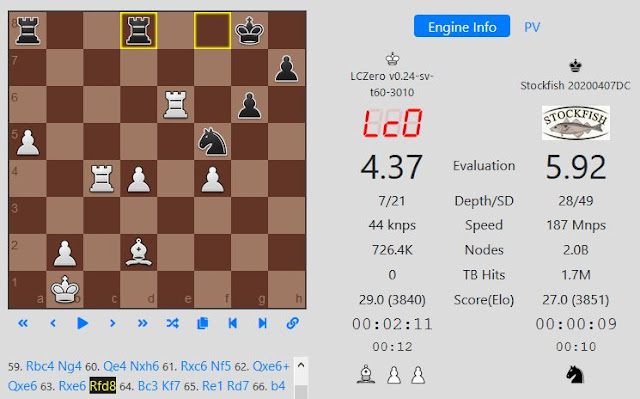 Leela had 3 passes on the queen side but it took its time pushing them forward. It first focused on the king side to avoid any counter from the black pawns. By move 94 All the black pawns were gone as well as a pair of rooks, and Leela had 3 pawns. The game was adjudicated 20 moves later. There were two white wins in this opening, Leela still has a +2 lead.

The center was blocked in game 45, there were no exchanges until move 18. Evals were close to 0 as the engines opened both sides, after exchanging queens Stockfish gave a rook for a bishop and pawn. Leela moved its pieces forward and left its black king exposed, Stockfish ended the game with perpetual check. In game 46 the first exchange was on move 25, the queen side was blocked and the engines opened a file in the center. Leela's eval was over 1 and the engines started to shuffle. The board was crowded with all pieces still playing, nothing happened except two piece exchanges until move 93. Then in a series of exchanges the engines reduced to a queen ending, Leela kept playing until the game was adjudicated on move 184.

Stockfish pushed pawns on the king side in game 47, after a few minor piece exchanges the king side stablized. Leela's eval was over (negative) 1, after the queen side pawns stabilized as well the engines started to shuffle. Close to the 50 move draw Leela gave a rook for a knight and Stockfish's eval jumped close to 2. However, it was a false alarm since the position remained blocked and the shuffle continued all the way to a 50-move draw. In game 48 evals stayed low. The black queen moved forward early, it captured two pawns on the queen side before queens were exchanged. The position opened with more exchanges, Stockfish was a pawn up and had a passer in the center while Leela had a passer on the king side. In a long series of exchanges Leela gave material and captured the black passer, then promoted its passer to a queen. The result was a Q vs RN position on move 52. Leela was able to capture a few black pawns but nothing more. The game continued until a tablebase draw on move 121.

Games 49-50 started with a 20-ply book in the King's Indian defense, where white gave its queen for a bishop and a knight. In game 49 Leela's eval was negative despite white's material advantage. The white pieces stayed back, Leela created a queen side passer and pushed it forward, its eval increasing. Stockfish blocked the passer on the 3rd rank and the engines started to shuffle. Leela's eval went over 2, it captured a pawn and exchanged a pair of rooks. The shuffling continued and Leela's eval came down, on move 123 the engines started to open the position with exchanges. Stockfish captured the black passer and the game reached a Q vs BNN position. The game continued until it was finally adjudicated on move 193. In game 50 Stockfish captured a rook for a bishop early, getting a more equal Q vs RN imbalance. Leela's eval increased over 1 while Stockfish's eval stayed low. The engines cleared the center, Stockfish was 3 pawns up and the engines started to shuffle. After a while Stockfish slowly pushed a passer on the queen side, stopping on the 4th rank. After a few exchanges the game reached a Q vs RB position on move 96. Leela wouldn't lower its eval and the game continued until a tablebase draw on move 172.