After 30 games the score is tied 5-5 with 20 draws. There were 4 decisive games in a row, one biased opening with two white wins and one game pair win for each engine. This superfinal is one of the closest we've seen in TCEC.

There were many exchanges after the opening in game 21 and the position opened up. Stockfish was a pawn up in a QRB vs QRB position on move 31, its king was more exposed than Leela's and evals were close to 0. The engines exchanged queens and Leela captured the bishop for pawns. The game ended in a R vs RB tablebase draw. In game 22 Leela pushed pawns on the king side and kept its king in the center. It gave a pawn and opened the king side with only one black pawn left to protect the black king. Leela also had a protected passer on d6 that Stockfish had to keep an eye on. After some shuffling Stockfish gave a rook for a bishop to remove the passer. The game reached a QRN vs QBN position on move 46, Stockfish's eval was 0. For a long time nothing happened, the engines exchanged knights and a few pawns. On move 127 the queens were exchanged and the game ended in a tablebase draw not long after that.

Many pawns and pieces were exchanged after the start of game 23. Stockfish was two pawns up but its king was in the center without the option of castling. Evals came down slowly, Leela got one pawn back and the game reached a QRB vs QRN position on move 33. The engines started to shuffle and repeat and the game was adjudicated. There was a network crash in the game, which was later resumed. In game 24 both engines did not castle their kings, queens were off early and Leela was two pawns up. Evals came down, Stockfish got a pawn back and reduced to a RN vs RB position. Evals dropped to 0 and the game ended in a tablebase draw.

Stockfish was a pawn up early in game 25, and it had a protected passer on e6. Leela blocked the passer and focused on the queen side where it had a pawn majority. Leela regained the pawn, then engines shuffled for a while and evals came down. Then Leela gave a pawn and created a queen side passer. When the black passer reached the 2nd rank Stockfish sacrificed a bishop to expose the black king and ended the game in a perpetual check draw.

Queens were off early in game 26, both kings moved and remained in the center. Evals were over 1 despite equal material and what appeared to be a dry position, could be because Stockfish had two isolated pawns on the queen side. Evals increased gradually, Stockfish played defensively and guarded its pawns while Leela tried to find a way through. On move 41 Leela captured a pawn on the king side. The game reached a RRN vs RRB position. 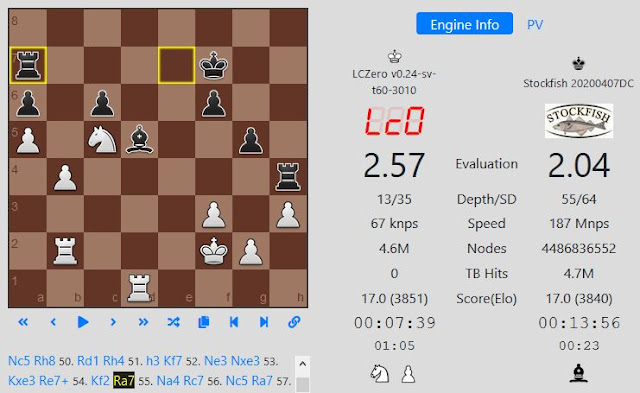 There was a long shuffle, Stockfish cracked and started to push pawns forward. most pawns were exchanged, Stockfish was down to its last one and Leela went two pawns up. 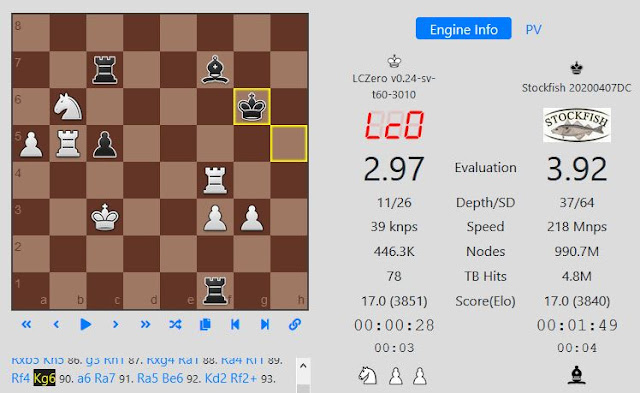 Leela's advantage was decisive but it was in no hurry. By move 110 the engines exchanged a pair of rooks and removed the queen side pawns. It took Leela 45 moves before it started to move its pawns forward, the game ended in a tablebase position on move 181. Leela wins a game pair and takes the lead.

The center was blocked in game 27. Leela pushed a pawn to a6 and opened a file on the queen side. Stockfish pushed the h pawn and concentrated on the king side. The engines exchanged a few pieces, then captured their opponents' forward pawns and the position looked stable. 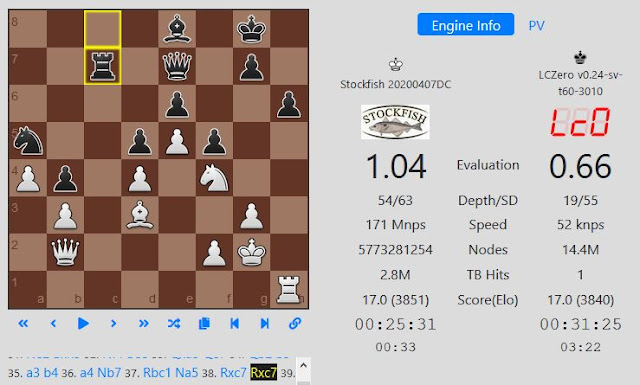 Nothing happened for more than 30 moves. Suddenly Stockfish's eval jumped over 2, it saw an opportunity to attack when all the black pieces were on the queen side. It gave a pawn and opened the king side, Leela's king faced the white queen and rook with only a pinned pawn as a defender. 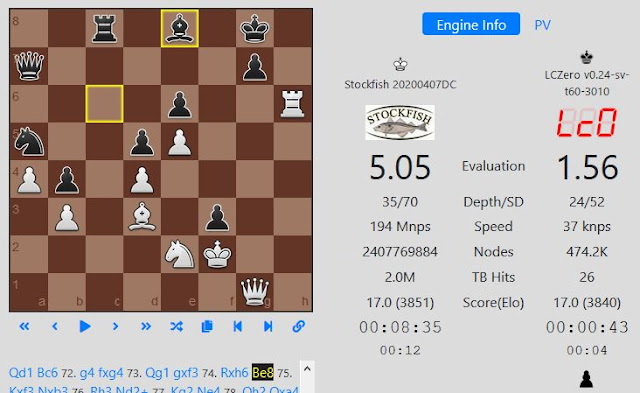 Leela tried to defend but its king had nowhere to run. Stockfish sacrificed a knight but soon had the black king in a mating net. Leela lost its queen and rook and the game ended in mate.

In game 28 Leela was strong on the king side and Stockfish concentrated on the queen side, similar to the previous game. Only a pair of pawns was exchanged, all the pieces remained on the board for 36 moves. Evals increased all the time, Stockfish's king side pieces were undeveloped and its king remained in the center. Leela gave a pawn and opened the queen side. At first Stockfish had a pair of connected passers but then Leela took one of the passers and exchanged rooks. 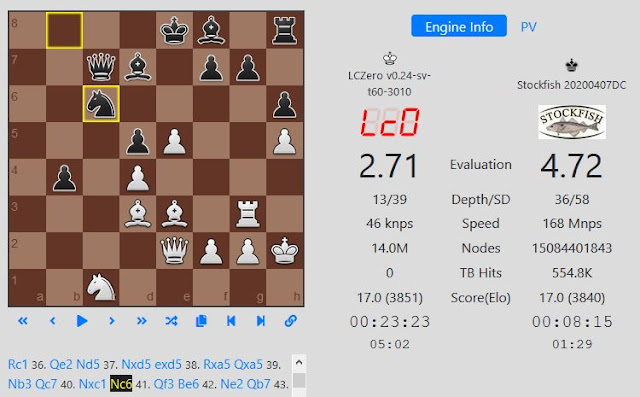 The black king was out in the open, it walked to the queen side with pieces surrounding it. On the king side Leela had a constant threat on the black pawns and Stockfish kept its rook and bishop there to defend. Leela had a significant advantage but it took its time. It pushed its king side pawns very slowly with long shuffle periods between pawn moves. On move 121 the queens were exchanged, and on move 138 Leela captured the black passer and went a pawn up. 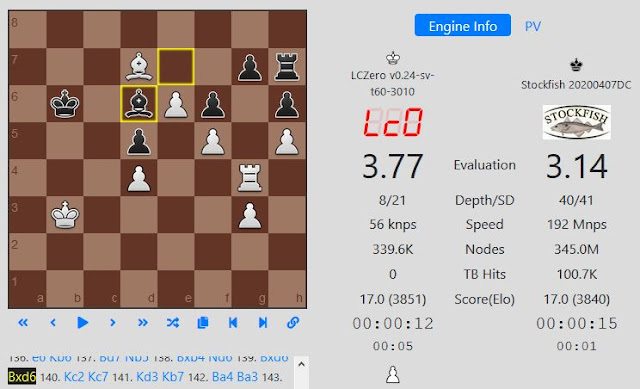 Finally Leela opened the king side and trapped the black rook in the corner. The white king infiltrated through the king side, Stockfish gave its rook to stop a passer and the game reached a tablebase draw on move 181. There were two white wins in this game pair, though the games were very different. Leela remains in the lead.

Stockfish had an eval of about 1 from the start of game 29. The engines opened a file on the queen side, all pieces were on the board until move 23, then through a series of exchanges the engines reduced to a QRN vs QRB position with Stockfish a pawn up. 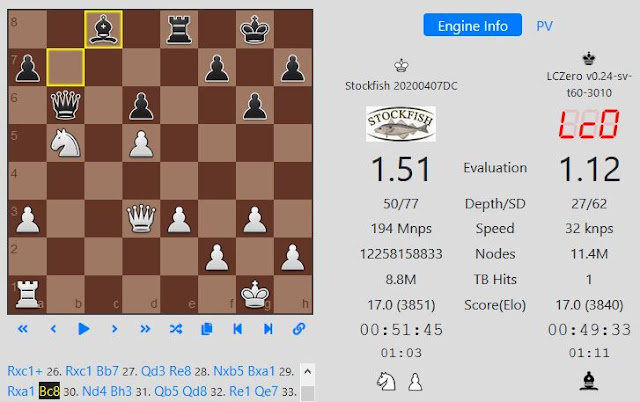 For a while evals didn't change a lot, then on move 39 Stockfish's eval jumped over 2.5. Leela remained calm, there did not seem to be a significant change in position but Stockfish was sure it had something. The black queen side pawns were not protected enough and Stockfish managed to capture the a pawn. It was two pawns up with a dangerous passer, Leela still thought it was ok after the rooks were exchanged. 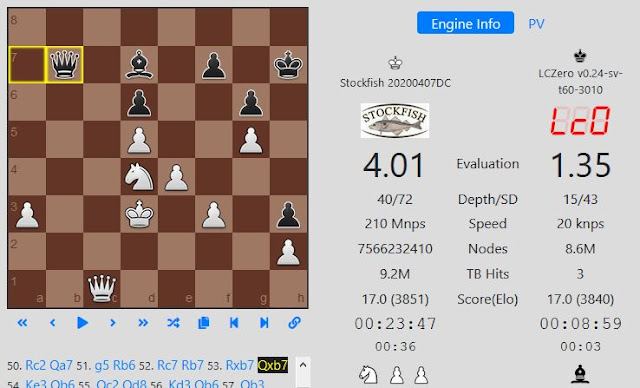 Leela tried to counter with its queen, but it had to be careful not to allow the white queen attack its king. Stockfish pushed its passer and Leela's eval started to increase. It couldn't handle both the passer and the threat to its king, Leela exchanged the minor pieces. Stockfish saw mate in its PV. 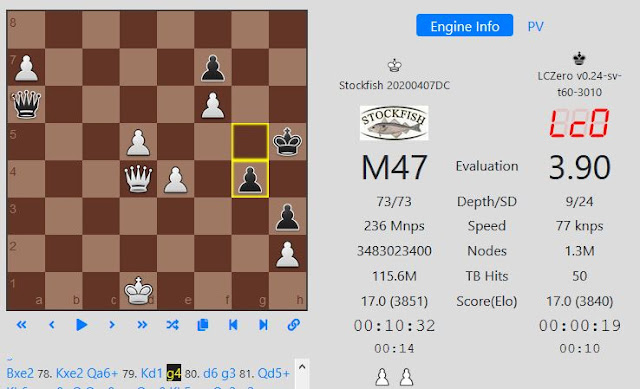 The passer cost Leela its queen, Stockfish even promoted a second pawn before the game was adjudicated.

In game 30 Leela opened a file on the king side, and after exchanging queens it castled long. The game reached a RB vs RB position on move 34. For a few moves Stockfish's eval went over 2, but Leela didn't play according to Stockfish's suggestion. The engines started to shuffle and Stockfish's eval dropped to 0. On move 103 the engines exchanged bishops and reached a drawn rook ending. The game ended in a tablebase draw. Stockfish wins a game pair and the score is tied again.