After 60 games Leela leads 9-7 with 44 draws. There is no change in the lead Leela has after 10 straight draws. Leela came close to another win but Stockfish held after a long battle.

Stockfish pushed pawns on the king side from the start of game 51, after a few pawn exchanges it had a queen and rook facing the black king. Leela exchanged pieces to stop the attack and evals came down. By move 39 the game reached a QRB vs QRB position. The engines exchanged queens and Stockfish pushed a passer to the 6th rank. Leela exchanged bishops and captured the passer, play continued until reaching a tablebase draw. There were many early exchanges in game 52. Leela gave a rook for a bishop and created an advanced passer on the 6th rank. Only QBB vs QRB remained on move 26, Stockfish blocked the passer and its eval was 0. Leela captured a pawn and created another passer on the queen side, then pushed it to the 6th rank as well. After exchanging queens Leela's eval was over 1, the white king came forward to support the pawns. However, Leela couldn't move its passers forward safely, and it couldn't break the black defense. In the end Leela gave one passer away and the game ended in a perpetual check on move 103.

All pieces were on the board after the start of game 53, only one pair of pawns was exchanged. Leela pushed pawns on the queen side and its eval turned negative. The queen side opened and Stockfish went a pawn up and created a passer. After some shufflng the engines reduced to a RB vs RB position with evals close to 0. The game ended in a tablebase draw. In game 54 the queen side pawn structure was more stable. There were few minor piece exchanges and Stockfish went a pawn up. After the king side pawns stablized the engines shuffled for 40 moves, then exchanges opened the king side and exposed the white king. Stockfish ended the game with perpetual check.

In game 55 a long series of exchanges left only RB vs RB on move 24, and an opposite color bishop ending on move 29. Stockfish was a pawn up, the game continued until move 63 but it was a dead draw. In game 56 the engines castled in opposite directions, a series of exchanges cleared the board by move 25 but there were still enough pieces to play on. However, apart from a few pawn moves the engines shuffled and the game ended in a repetition on move 52. 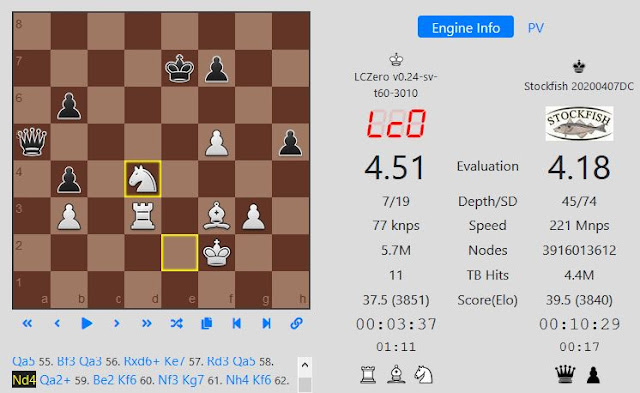 Stockfish captured a pawn and its eval went down a little. It seemed Leela didn't know how to proceed, there was a long shuffle and Stockfish's eval was around 1. On move 129 the engines exchanged a pair of pawns, Leela had only one pawn left. Stockfish's eval jumped over 2 again, Leela captured a pawn and shuffling started again. After 30 moves Stockfish's eval fell to 0, this time Leela's eval also came down. The engines exchanged another pair of pawns, the game continued for another 35 moves before adjudication. Did Leela miss a win here?

Games 59-60 started with the Fried Liver attack, white sacrificing a knight and the black king on e6. In game 59 Stockfish's eval was over 1 from the start. The black king retreated to the back rank, a few minor pieces were exchanged and Stockfish had a central passer on the 6th rank. Stockfish went 4 pawns up but its eval started to come down. The engines exchanged a pair of rooks, then shuffled for a while. After exchanging the remaining rooks the game reached a QB vs QBN position on move 38, 25 moves later the queens were exchanged. Leela's eval was negative but the position was completely drawn. The game ended in a tablebase position on move 142. Evals were below 1 in game 60, Stockfish's eval dropped to 0 quickly. After a few minor piece exchanges Leela created a central passer on the 6th rank. Leela's eval also dropped, though it had 4 pawns for the knight. The engines continued to exchange pieces and pawns, on move 43 only R vs RB remained. Leela lost its central passer but it pushed 3 connected passers on the king side. Stockfish captured one passer and exchanged rooks, its king and bishop were able to stop the remaining pawns. The game ended in a tablebase draw.