After 20 games the score is tied 3-3 with 14 draws. Stockfish won a game playing black, out-thinking Leela in what probably should have been a draw.

Evals were around 1 after the start of game 11. A series of exchanges opened the blocked center, Stockfish grabbed the g7 pawn and opened a file for Leela's rook. Evals came down as the white king had to be defended, the engines exchanged queens and only RRB vs RRB remained on move 27. Leela gave a rook for a bishop and ended the game in perpetual check.

In game 12 all pawns stayed on the board, the engines blocked the center and queen side, and stayed behind their pawns. Leela's eval went over 2 when a pair of pawns was exchanged and the f file opened. Stockfish's eval jumped over 4, it saw it was in trouble. 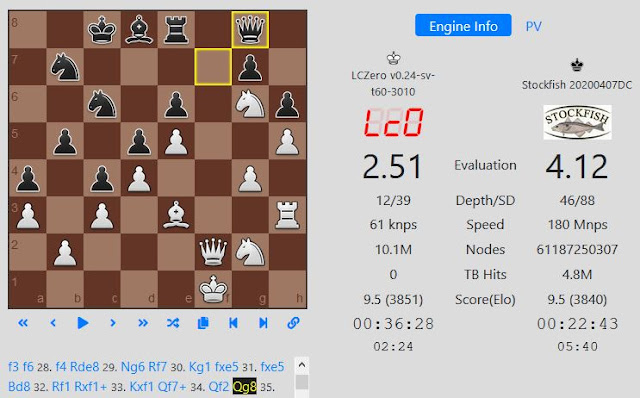 Leela played many waiting moves, Stockfish covered the entry points on the f file and seemed to be holding. The engines exchanged bishops and a pair of pawns on the king side but nothing seemed to be happening. Leela's PV kept suggesting that black should play b4, and Stockfish refused to do it. The draw counter increased and the engines ran out of time and played on increment. On move 87 Stockfish finally played b4 and gave a pawn. Was it necessary? I don't know. Now Stockfish had to worry about the a pawn as well as the e pawn. Still Leela played slowly, the engines exchanged rooks and the white king walked to the queen side. On move 125 the queens were exchanged. 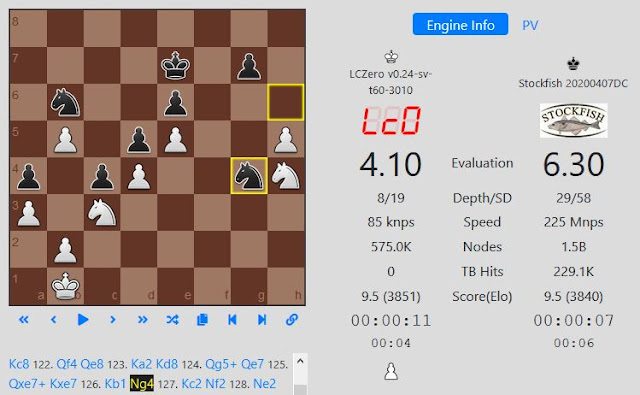 It seemed Leela stumbled on the right plan. It kept the black king busy on the king side, drove one black knight away and finally the king invaded the queen side and captured the a pawn (move 148). The game continued until a tablebase position on move 180. Did Leela have to torture Stockfish and the viewers like this? First game pair win for Leela, score is tied.

There were many exchanges after the start in game 13, only QBB vs QBN remained on move 28. Stockfish was a pawn up and had a bishop pair, yet evals were below 0.5. Leela's queen was active and it avoided being exchanged. After a long shuffle the engines reduced to a B vs N ending, Stockfish managed to create a passer but Leela blocked it effectively. Stockfish finally lowered its eval and the game was adjudicated on move 146.

In game 14 Leela's eval increased gradually from the start. The black pieces did not have room to move, Stockfish's eval also went over 2. Leela exchanged pieces when it could, on move 41 queens were exchanged and only RRB vs RRN remained. 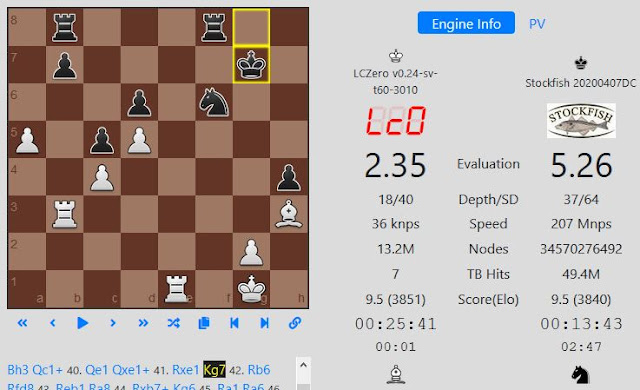 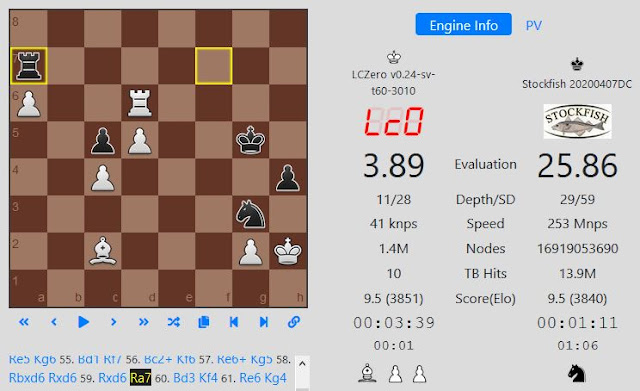 Stockfish was ready to resign, Leela still took things slowly. The white king walked all the way to the queen side to capture a third pawn. The game was finally adjudicated on move 86. Leela wins two game pairs in a row, taking the lead.

The engines opened files after the start of game 15, then the white queen went forward and grabbed a pawn. Evals came down to 0, Stockfish gave the pawn back and exchanged queens, the game was adjucated a draw on move 35.

The engines exchanged minor pieces after the start of game 16. Stockfish's eval was low, Leela had more space and its eval was over 1. The pawns restricted the major pieces, and on move 39 only major pieces remained. 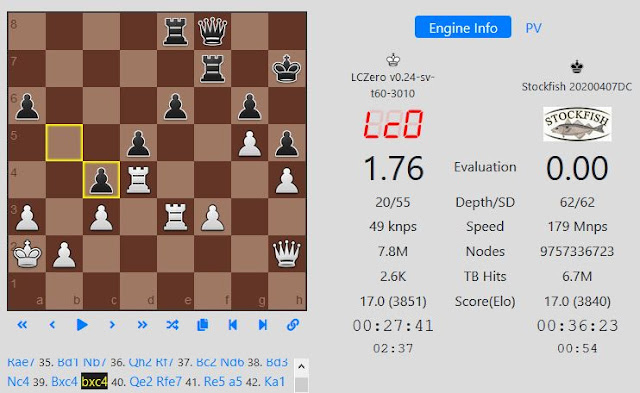 Stockfish guarded the entry points and there was a long shuffle. On move 82 Leela gave a pawn to reset the 50 move counter. Its eval came slowly down and on move 130 it gave a second pawn, reset the counter again, and its eval came down to 0. However, 3 plys from adjudication Stockfish's eval jumped over (negative) 1.5. After exchanging a pair of rooks Stockfish's eval was over 3, Leela still wasn't worried. 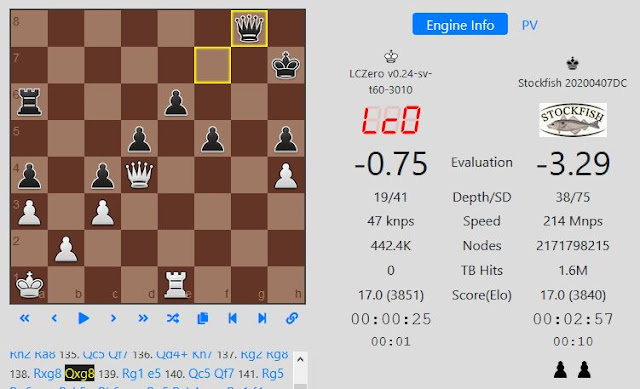 Stockfish was two pawns up but Leela thought the exposed black king could compensate for any plan Stockfish might have. However, Stockfish pushed its central pawns forward and its eval kept increasing. The white pieces were busy blocking the pawns and the black king charged forward ahead of the pawns. 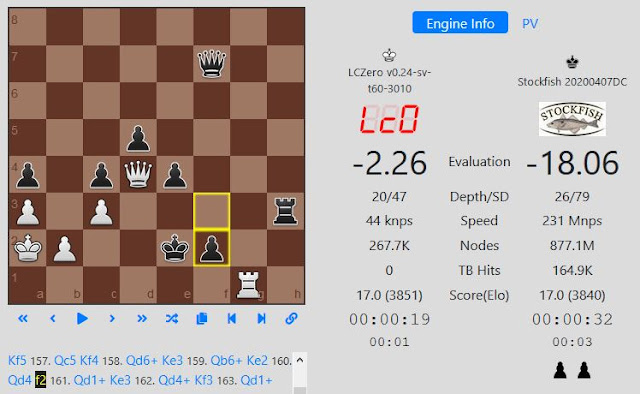 Leela gave checks and drove the king back, but eventually it ran out of checks and Stockfish promoted a pawn, effectively capturing a rook. Leela kept fighting and it captured the white rook, but Stockfish still had a second passer. Leela chased the white king across the board but couldn't give checks forever. Stockfish promoted again, this time Leela lost its queen and the game was over just before mate. An unbelievable game by Stockfish, Leela should have taken the draw when it could. Stockfish wins a game pair and the score is tied again.

The engines played on the queen side at the start of game 17, then started to exchange pieces and pawns until all the queen side pawns were gone. The game reached a (same color) bishop ending on move 34, Stockfish was a pawn up and its eval close to 1. It took another 40 moves for both engines to realize the position was a draw. In game 18 Leela pushed pawns on the king side and did not castle. Evals were over 1, Stockfish exchanged pieces when it could, on move 32 Stockfish traded its queen for two rooks and the game reached a QB vs RRB position. The engines shuffled, for a minute Stockfish's eval jumped over 2 but Leela played a different line and Stockfish relaxed. After exchanging a pair of pawns Stockfish's eval dropped to 0, on move 93 Stockfish found a perpetual check to finish the game.

In game 19 the engines castled in opposite directions. The center was open and the engines exchanged pieces quickly, only RBN vs RBN remained on move 23. Evals came down, after exchanging the minor pieces evals were close to 0 in a rook ending. The game was adjudicated when the pawns stopped moving. In game 20 again the engines castled in opposite directions. There were less open files, the engines exchanged minor pieces until reaching a QRR vs QRR position on move 29. The engines shuffled, with occasional pawn moves to reset the 50-move counter. On move 129 exchanges began and the game ended in a tablebase draw.