Games 71-72 started with a 2-ply book 1.e4 Nc6. In game 71 Stockfish forced the black king to move without castling. The king side opened and yet Stockfish castled short. Leela traded its queen for a rook and a knight and on move 28 only QR vs RNN remained, Leela 2 pawns up and with a central passer. Leela pushed the passer to the 2nd rank and Stockfish gave a rook for a knight to remove it. For the rest of the game the engines exchanged a few pawns and shuffled. The game ended in a tablebase draw on move 199. In game 72 the engines castled in oppostie directions, Stockfish pushed pawns on the king side and Leela on the queen side. Both kings lost most of their pawn support and both hid behind an opponent's pawn. Only major pieces remained, the rest of the game was shuffling, trading pawns and pieces. The game ended in a tablebase draw on move 131.

Leela traded both its bishops for knights in game 73 and went a pawn up. Evals came down, Stockfish regained the pawn and the engines exchanged rooks through the open files. The engines continued to exchange all their pieces and the game ended in a tablebase draw on move 49. In game 74 Leela pushed pawns on the king side, it gave a pawn and managed to push one of its pawns to f6. Stockfish's king was in danger and it had a trapped bishop in the corner. It reacted by exchanging pieces, only RRN vs RRB remained on move 26. After the engines exchanged a pair of rooks Stockfish traded its trapped bishop for the two advanced white pawns. In the RN vs R endgame Leela started with 2 pawns to Stockfish's 5. Leela slowly captured black pawns, Stockfish also managed to capture one and each engine had one pawn left on move 58. The engines played the 7-man position until a tablebase draw on move 99.

Queens were off early in game 75, the engines castled late and in opposite directions. The central files were open and the engines exchanged all rooks by move 26. Evals were close to 0 and the game reached a (same color) bishop ending. The game was a draw, it continued until the pawns stopped moving and the evals were low enough. In game 76 both engines castled short quickly. All pieces were on the board until move 26, Leela pushed a pawn to h6 while Stockfish was active on the queen side. Leela's eval jumped over 1 when the queen side became stable, but then the engines started to shuffle. A pawn move reset the 50 move counter, evals slowly came down. Stockfish's queen moved forward, when Leela threatened mate Stockfish ended the game with perpetual check.

Stockfish had an eval over 1 at the start of game 77. It had a bishop pair while Leela had two knights, and it also went a pawn up. The engines exchanged queens and all minor pieces and the game reached a double rook ending on move 23. Both engines had a passer on the queen side, Stockfish pushed its passer forward and its eval jumped over 2 when its passer reached the 7th rank. 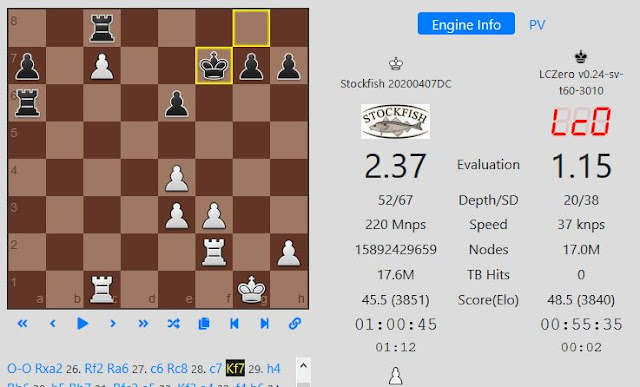 Leela remained calm, it blocked the white c pawn with a rook and its passer also moved forward. When the black passer reached the 2nd rank Stockfish's eval started to jump again. The engines traded the passers and a pair of rooks, Stockfish was sure it was winning. 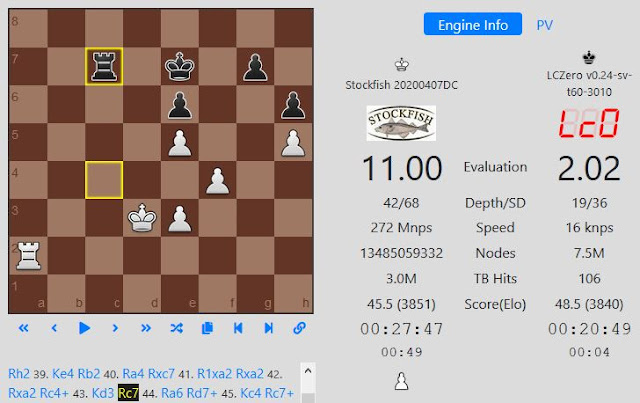 The rook ending with one pawn advantage looked innocent enough, but Stockfish saw far ahead that it had a winning line. The white king came forward, forcing the black rook to move out of the back ranks. Stockfish lost one of the central pawns but managed to take the black e pawn and then the g pawn fell as well. The game ended with mate in Stockfish's PV.

In game 78 Leela had a bishop pair advantage from the start, its eval increasing over 1. Stockfish castled long, the queens were off early and Leela kept its king in the center. Stockfish played defensively, its pieces stayed back and it stabilized the pawn structure. On move 32 the engines started to shuffle, extended to 70 moves by pawns. The engines slowly exchanged pieces and pawns, in a RB vs RN position Leela sacrificed its bishop to create a passer on the 7th rank. Stockfish was prepared to give its rook for the passer, knowing the resulting endgame was a draw. Leela also knew this and kept its passer on the 7th rank, the game continued until Leela gave up the passer, a tablebase draw on move 169. Stockfish wins the game pair and reduces Leela's lead to +2.

Games 79-80 started with a 30-ply book in the Ruy Lopez, Flohr system, played in game 2 of the Kasparov-Karpov match in 1990 and won by Kasparov in white. In game 79 the engines opened files on the queen side, several piece exchanges cleared the board and evals came down to 0. Stockfish went a pawn up and reduced to a QRB vs QRN position on move 43. Leela refused to exchange queens for a while, then the engines reduced to a B vs N ending. Leela lowered its eval close to the 50-move draw and the game was adjudicated. In game 80 all pieces were on the board until move 32. Leela created a central passer on the 6th rank and supported it with its rooks. Not a lot happened until Stockfish blocked the rook support with its bishop. Leela gave a rook for the bishop and Stockfish got rid of the passer, with QB vs QR remaining on move 53 with Leela 2 pawns up. Leela had a queen side passer, but after exchanging queens the endgame was a draw. Leela's eval slowly came down and the game ended in a tablebase draw on move 109.
Posted by Assaf Wool at 1:39 PM