Evals stayed close to 0 in game 24.1. The engines castled in opposite directions, neither attacked with pawns. Instead the engines shuffled and exchanged pieces, the game reached a RB vs RN position and ended in a repetition. Game 24.2 was similar. Queens were exchanged early and by move 34 only RBN vs RNN remained. Komodo created a queen side passer and pushed it to the 7th rank. Stockfish exchanged everything to stop the passer, drawing the game in a knight vs pawns tablebase position.

The engines exchanged almost all the pieces by move 27 of game 25.1, only RB vs RB remained. The game reached a tablebase draw on move 42. Komodo gave a pawn early in game 25.2 and Stockfish thought it had an advantage for a while. Komodo attacked the black king through the open queen side, evals came down to 0. After a series of exchanges Stockfish gave a rook for a bishop. The game reached a RN v BN position with Stockfish 3 pawns up, evals were at 0 and the game ended by the draw rule.

The engines castled in opposite directions in game 26.1, Both engines pushed pawns towards their opponent's king. Stockfish's eval started around 1 and drifted down slowly. Komodo lost a rook for a knight and pawn, after exchanging queens only RRB vs RBB remained. 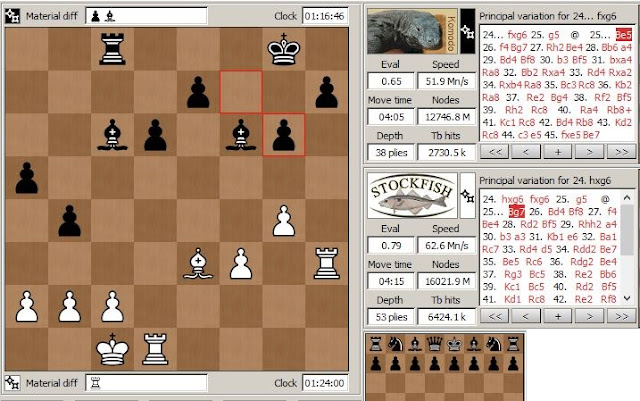 The evals started to increase as Stockfish outplayed Komodo in the ending. First it doubled rooks on the h file and won a pawn. Komodo's king found safety behind a white pawn. Then Stockfish exchanged pawns and opened more files for its rooks. 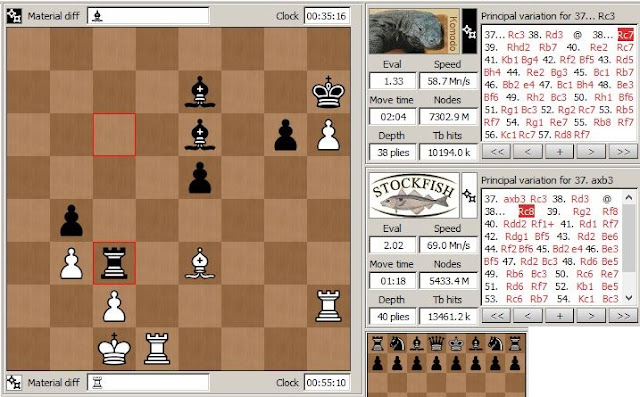 Komodo played defensively and refused to exchange rooks. Stockfish was able to drive the rook away and started to push the c pawn. The game was adjudicated when the pawn reached the 6th rank. Komodo could not avoid exchanging rooks and was about to lose a bishop as well.

In game 26.2 Komodo pushed pawns on the king side while Stockfish did not push on the queen side. Instead it gave a rook for a knight and pawn and opened a file on the queen side, weakening the white king's position. 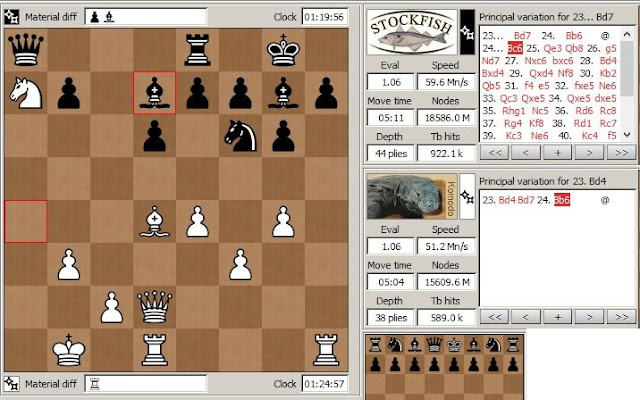 Evals slowly increased as more and more pieces were exchanged. On move 41 only RN vs BN remained and evals were close to 2. 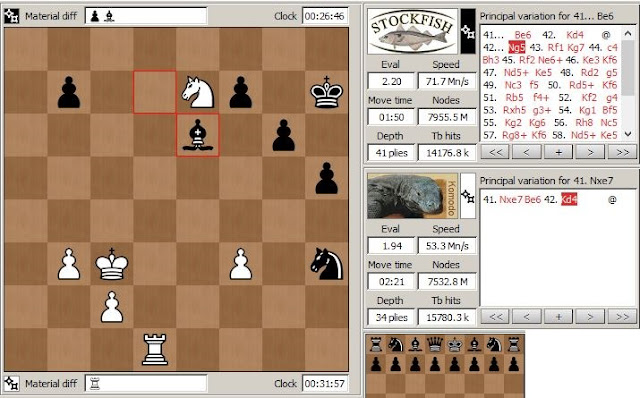 Komodo had a pawn majority on the queen side and its pawns slowly moved up the board. Stockfish tried to counter with its king side passer but it was stopped on the 2nd rank. The game ended with Komodo capturing the bishop with a nice combination. This opening had a biased result, though the two games were not similar.

Stockfish started game 27.1 with an eval around 1. It kept its king in the center uncastled and pushed pawns on the king side. Komodo exchanged a few pieces and managed to defend its king side pawns despite the open files and white's rooks. Komodo gave a pawn and exchanged a pair of rooks, evals fell down to 0. The game was adjudicated a draw with several pieces still on the board. In game 27.2 the evals stayed low, Komodo castled and did not open the king side. After many exchanges, in which Komodo gave a rook for a bishop, the game reached a QN vs QR position. The black king was under threat, Stockfish captured the knight and Komodo ended the game with perpetual check.