After 26 games Stockfish leads 5-1 with 20 draws. After losing the first game Stockfish is in charge with 5 wins in the first quarter of the match. This superfinal may be as one-sided as the previous one.

In game 9.1 Stockfish started with an eval over 1 and it constantly increased. After a few exchanges the black f file was open and stockfish concentrated its pieces as it prepared for a king side attack. By move 22 both evals were over 2. 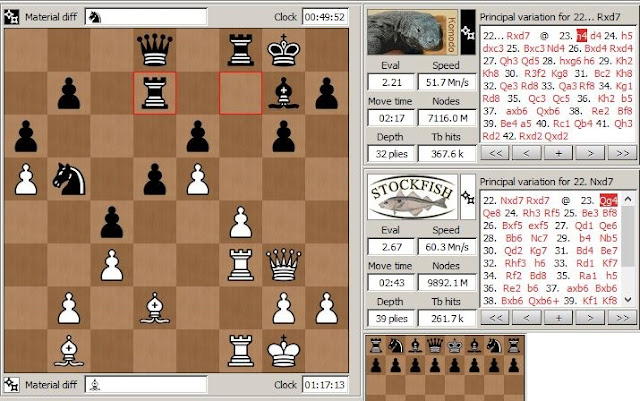 Komodo placed a rook on f5 to block the white pawn and prevent a further weakening of the king side. Stockfish could take the rook with its bishop but first it moved its king to the corner and captured a pawn to clear the queen side. Evals continued to increase, the end was in sight. 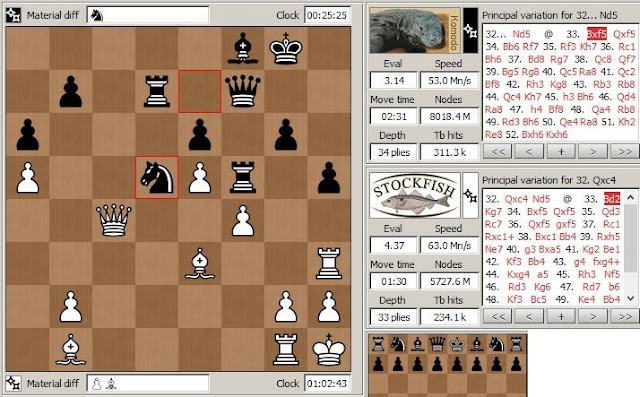 Stockfish opened the g file and then allowed Komodo to exchange rooks, without losing material. Instead Komodo won a pawn and equalized, though this opened the f file as well. 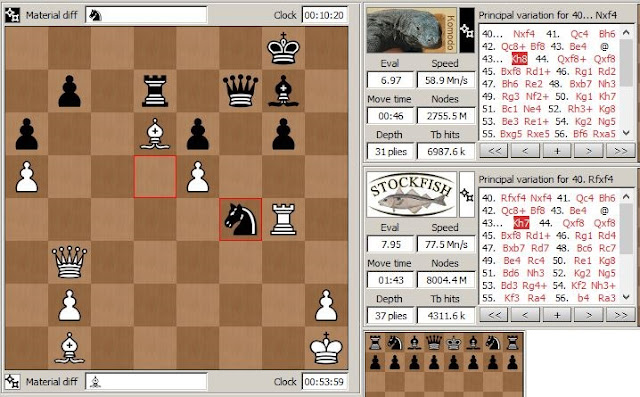 The white pieces were too strong and the black king was vulnerable.The game was adjudicated before Stockfish started to win material, the PV showed it was about to win a piece.

In the reverse game 9.2 Komodo's eval started low and increased to about 0.7. There was no king side attack, instead the engines exchanged pieces until only RN vs RN remained on move 30. Komodo was a pawn up with central passer, Stockfish gave a pawn to create a passer on the queen side. Both engines captured the other's passer to avoid queening, then Stockfish got a pawn back. Komodo's advantage was not enough in a rook ending, Stockfish held the draw. Another minimatch for Stockfish, a missed chance for Komodo.

Stockfish had an eval of under 1 in game 10.1, there were almost no exchanges until move 24. After a series of exchanges Stockfish was a pawn up, with a pawn majority on the king side. Evals came down as Komodo captured a pawn on the queen side and equalized. The engines gradually exchanged all the pieces and the game ended in a tablebase draw. In game 10.2  the evals stayed close to 0. Stockfish thought it had a small advantage for a while, but after exchanging pieces and opening the queen side both evals came down to 0. The game ended in an early draw with many pieces still on the board.

In game 11.1 Komodo's eval was 0 from move 13 and Stockfish's eval came down to 0 a few moves later. The position was open with both kings uncastled in the center. The engines quickly exchanged most pieces, Komodo gave a rook for a knight and the game reached a RR vs RN position on move 27. The white pawns were vulnerable, Komodo managed to capture 2. The game ended with the white king trapped, just before a repetition draw. In game 11.2 Stockfish captured a pawn and its eval was negative from the start. The king side was open and both engines castled long. Stockfish had a connected pair of passers on the king side and Komodo had an advanced passer in the center. Stockfish gave a bishop to stop the white passer, and managed to keep one passer on the king side. The game reached a QN vs Q position, and ended in a draw  just before Komodo lost its knight for the black passer.

The pawns in the center and on the queen side were locked in game 12.1. Komodo pushed pawns on the king side, Stockfish's eval was around 1, it had more space and the black king was exposed. Evals dropped to 0 as Stockfish gave a rook for a knight and pawn, opening the king side. The engines exchanged most pieces and the game ended in a repetition draw. In game 12.2 the engines opened the queen side and exchanged a few pieces. Then after mostly shuffling for 25 moves the engines exchanged down to a QBN vs QBB position, evals came down to 0 and the game ended in another draw.

Stockfish had an eval advantage from the start of game 13.1, its eval rose to about 1.3 and Komodo's eval to about 0.7. Komodo kept its king in the center uncastled as it pushed pawns on the king side. After a series of exchanges only RBB vs RNN remained, evals staying constant for a while. 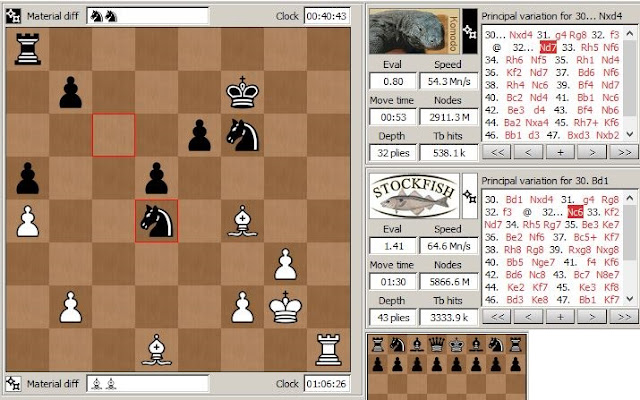 Both engines had passer, Stockfish's bishop pair was an advantage in an open position. The white pawns slowly advanced on the king side, and Komodo chose to allow the f pawn through without exchanging. This meant both engines had connected pairs of passers, the evals suggested that Stockfish's pair was stronger. 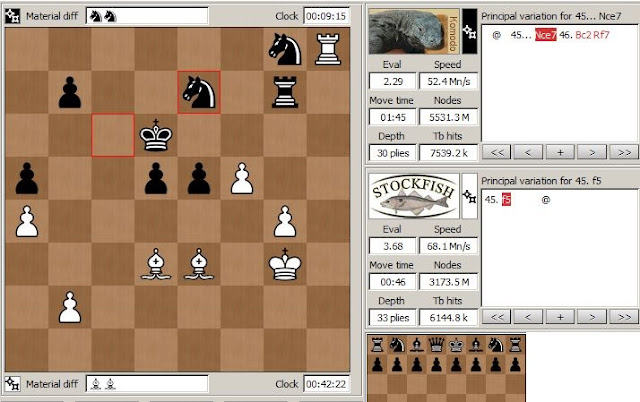 Evals jumped higher as Stockfish managed to place its rook behind the black pawns. Komodo's king walked to the queen side and captured a pawn, Stockfish moved its king forward and Komodo gave a knight for one of the passers. The game was adjudicated before Komodo lost more material for the second white passer.

Komodo played the opening of the reverse game 13.2 in a completely different way. Its eval was close to 0 while Stockfish's evals turned negative after a while. There was a pawn exchange on move 18 and the engines started to shuffle, with no exchanges until move 60. After opening the queen side the engines exchanged most pieces until only RBN vs RBN remained. The evals came down to 0 and the game ended in a draw. Stockfish handled this opening much better.