There were many decisive games in the RR3 (13/21), and several surprising results. There were two decisive games within the top 3, and both Komodo and Houdini lost for the first time in the division. Jonny won its first game of the division as it fights against relegation.

The race to the superfinal continues to be close. Stockfish took the lead after a 5/6 score in the RR, it is the only engine without loss. Komodo lost twice but remains in second place after a 3/6 score, Houdini only 0.5 point behind after 3.5/6 with one loss.

Ginkgo had a low score of 1.5/6, it is joint last with Jonny who scored 2.5/6. Both engines had one win in the RR. Jonny beat Fire, quite a surprising result, while Ginkgo beat Jonny.

Stockfish - Jonny: Stockfish was a pawn up early in the game, its eval increasing from the start. However, Jonny exchanged pieces and locked pawns in a way that Stockfish couldn't penetrate the black position. For almost 50 moves the eval remained close to 2, still only a draw.

Komodo - Houdini: Komodo had an eval advantage from the start, Houdini equalized by move 16 and evals became negative. The center was blocked and Houdini threatened the white king while most of Komodo's pieces were on the queen side. Houdini sacrificed a knight and got a pawn to g3, with evals over 2. Komodo gave a bishop to get rid of the dangerous pawn, but Houdini had too many threats on the exposed white king and Komodo couldn't defend without losing material. A first loss for Komodo and a first decisive game within the top 3. Houdini and Komodo joint leaders with +4.

Fire - Ginkgo: A series of exchanges after move 20 left Ginkgo a bishop up while Fire had two extra pawns and a pair of central passers facing Ginkgo's king which could not castle. Evals were over 3 and increasing as Fire used its advantage to reach a winning RRB vs RBN position.


Houdini - Andscacs: Houdini had an eval advantage from the start, Andscacs held evals below 1 until move 25. Houdini captured a pawn and created a passer on the queen side, Andscacs had to block the passer while protecting its king on the other side. The defense collapsed not long afterward, a win for Houdini, now with a +5 score.

Stockfish - Komodo: Incredible game, see featured game below. Second loss in a row for Komodo, both to its top 3 rivals, Stockfish in second place with a +4 score, Komodo down to third with +3.

Komodo - Jonny: Komodo took over the game quickly despite a small eval advantage for Jonny at the start. Komodo created a central passer on move 28, and after locking the queen side Komodo captured a pawn and created a second passer, connected to the first. The white king found safety behind a black pawn, Komodo attacked on the king side and drove the black king away. The game was adjudicated as the passers were about to march. Komodo stays close to the top with +4.

Andscacs - Stockfish: Andscacs was 2 pawns up early in the game, the center was open and Stockfish's rooks and bishops were very active, evals slightly negative. Stockfish controlled the board, after exchanging queens it trapped a white rook and exchaged it for a bishop. The game reached a RB vs RR position, it took Stockfish 50 more moves to convert the win. Stockfish joins Houdini in the lead with +5.

Jonny - Fire: Jonny's eval increased from the start and was over 1 by move 16. Fire was less impressed, Jonny is usually an optimist. However, after Jonny opened the king side, exposed the black king and forced it to move uncastled even Fire saw the danger. Jonny took a rook for a knight and the game reached a RRB vs RBN position. The game continued for 20 moves, Jonny remained calm and found a winning path. This is the first win for Jonny in the division, quite a surprise against a strong opponent. Jonny now has a -5 score, Ginkgo and Andscacs have -4, the relegation race is wide open again.

Stockfish - Ginkgo: Ginkgo's king couldn't castle, it was forced to move and remained in the center. Stockfish had an eval over 1 with a passer on the queen side, the game reached a QRB vs QRB position on move 40 with equal material. Evals started to increase after Stockfish went a pawn up and added a second connected passer on the queen side. Progress was slow, Ginkgo took the passers out for a bishop, Stockfish found a way to break the Ginkgo defense. Stockfish is leading with +6, Ginkgo joins Jonny at the bottom with -5.

Ginkgo - Komodo: Ginkgo had more space after the start, but evals turned negative after the g file opened and the white king became exposed. Ginkgo exchanged all the minor pieces by move 35, evals were over 1 and continued to increase. After exchanging the rooks Komodo could attack the white king and Ginkgo had many weak pawns, the queen ending was a win for Komodo. Komodo joins Houdini in second place with +5, Ginkgo with a second consecutive loss is last with -6.

Fire - Houdini: Evals were close to 0 from the start. Fire was up a rook for a knight but Houdini had two extra pawns, its king safe behind a white pawn. Fire's eval started to increase after move 30, it opened the queen side and created two passers. Houdini started a series of exchanges that left only QB vs Q on move 52, Houdini with 3 extra pawns. At first Houdini thought it was holding, but Fire kept its last pawn alive and when it started to march Houdini realized it couldn't stop the pawn. Quite an unexpected result, this is Houdini's first loss in the division and it is now 3rd with a +4 score.

Stockfish - Fire: Stockfish had an eval advantage from the start, it was around 1 from move 16. The engines castled in opposite directions, the king side was half open and the black king was under threat. Stockfish captured two pawns and managed to place pawns on f6 and h6, its eval over 1.5, Fire's counter on the queen side was weak. Evals remained constant for a while, Fire's king hid behind the white pawn and the engines seemed to be shuffling. Evals started to increase again when Stockfish found a way to push its pawns forward. It gave a rook for a bishop and created a central passer. A few exchanges later Stockfish had a second passer, with both on the 6th rank the game was over. A tough win, Stockfish extends the lead with a +7 score.

Andscacs - Ginkgo: Andscacs had an eval advantage, with more space in a closed position. The engines shuffed behind pawn lines until Andscacs opened the king side on move 65 and evals started to increase. Andscacs doubled rooks on the f file and threatened the black king. Ginkgo exchanged pieces and avoided mate, but Andscacs captured pawns on the king side and created two passers on the 6th rank, winning the game. Andscacs moves away from the relegation zone with -3, Ginkgo is last with -7.

Ginkgo - Jonny: Ginkgo had an eval advantage from the start, it won a knight for two pawns on move 17 with eval over 1. After the engines exchanged queens the evals stayed more or less constant, the game reached a RRN vs RR position. Ginkgo's eval was close to 2 when it was down to its last pawn, Jonny's eval dropped to 0 when it saw how to capture the last white pawn so that only one black pawn remained. For a while the game seemed to be heading for a draw, an 8-man position and tablebase support for both engines. Remarkably Jonny blundered and immediately lost the game. As a result Ginkgo and Jonny close the table, both with a -6 score. 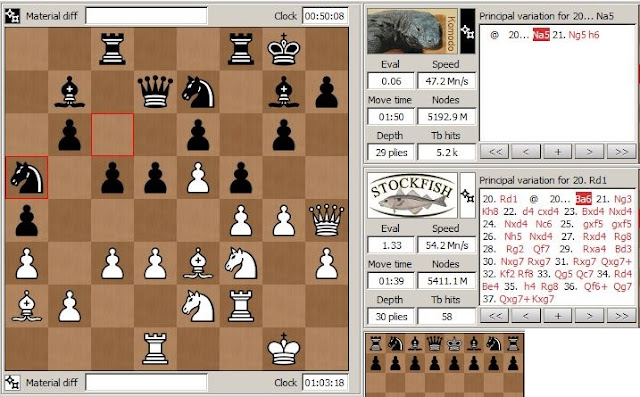 All pieces stayed on the board as Stockfish brought more pieces to the king side. On move 24 it made its first mate threat and Komodo realized it had to be careful. Still Komodo was hoping for a counter on the queen side, Stockfish's eval was already over 2.5. 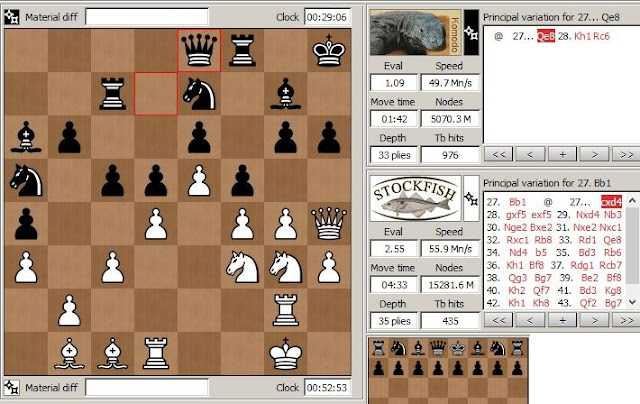 The first exchange of the game was on move 30, a first hole in the black king's position. Stockfish's eval jumped over 6, it was sure it was winning. It took Komodo another move to realise it was losing, too many of its pieces were on the wrong side and Stockfish's pressure was too great. 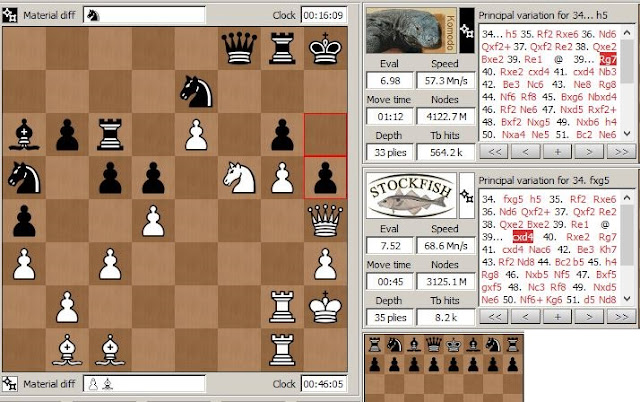 It was not obvious to see how Stockfish can win, the engines followed the line in both their PVs and the game was adjudicated in the middle of a series of exchanges, which ends with Stockfish a piece up.