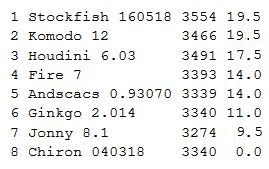 There were only 6/21 decisive games in RR5. Stockfish and Komodo extended their lead over Houdini, each had one win while Houdini drew all six games. Jonny had a weak RR with 4 losses, though one surprising win against Fire (again...). Ginkgo beat Jonny for the 3rd time in the division, it is 1.5 points clear of the relegation zone.

Andscacs and Fire have their small private race for 4th place. Fire has been ranked 4th in the last three TCEC seasons, it is somewhat surprising that Andscacs has a chance to overtake Fire.

Stockfish - Jonny: Stockfish gave two pawns after the start, yet it had an increasing eval advantage. Jonny's king stayed uncastled in the center, Stockfish attacked the center and traded R for BN, evals over 2. It took Stockfish another 20 moves to find better squares for its pieces and capture a pawn. The game was adjudicated, PV showed a clear win. Stockfish's score is +9, leading the table. Jonny last with -9.

Komodo - Jonny: Komodo opened up the queen side, then gradually added pieces to the queen side attack. It started to push pawns supported by rooks from behind, then created a passer together with a strong knight pair. Jonny had no defense and the game was adjudicated before it lost material. Interesting to note that the final move of the game was the first piece exchange on move 40. Komodo joins Stockfish with +9, Jonny with a second loss is last with -10.

Jonny - Fire: See featured game below. This is the second win for Jonny in the division, both wins against Fire. It is still last with -9.

Andscacs - Jonny: Andscacs had an eval advantage from the start. The position was closed with only the d file open, Andscacs doubled rooks there and Jonny blocked with its minor pieces. After Andscacs opened a hole on the king side and exchanged knights to open the d file evals started to increase. Jonny exchanged pieces, Andscacs was soon up a pawn in a QN vs QB position and about to capture another pawn for the win. Jonny back to -10 with its 3rd loss in the RR.

Andscacs - Ginkgo: Andscacs took over the center on move 21 with evals jumping over 2. It was soon two pawns up, then gradually improved its position. On move 51 only QRR vs QRR remained, Andscacs captured a 3rd pawn and Ginkgo's defense collapsed after queens were exchanged. Ginkgo down to -8, still ahead of Jonny.

Ginkgo - Jonny: Ginkgo's queen removed all the black pawns on the queen side, Ginkgo was a pawn up with a connected pair of passers, evals around 0.5. Ginkgo opened the king side and evals started to increase. Jonny had to defend both sides of the board and couldn't hold the position for very long. The game was adjudicated after Jonny lost a piece and was a rook down. Ginkgo improves to -7, Jonny last with -11.

Jonny had a strong bishop in the center from move 16. Its eval was over 1 while Fire's eval stayed close to 0. An over-optimistic eval is normal for Jonny, Fire had no cause for alarm at this point. 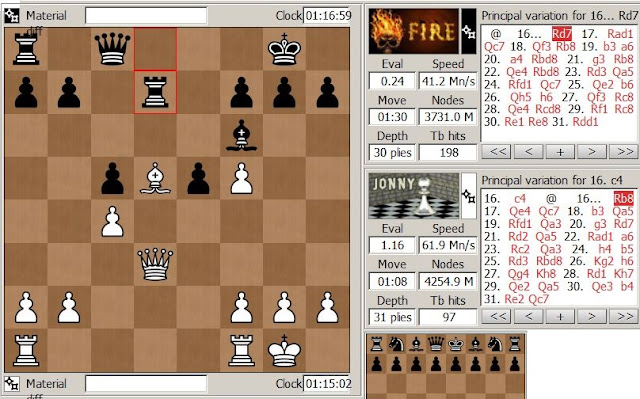 Evals gradually increased as Jonny pushed pawns on both sides. Jonny had more space and Fire was beginning to feel pressure. The position was closed but Jonny had potential pawn moves that could open holes on either side of the board. Fire was in checkers mode... 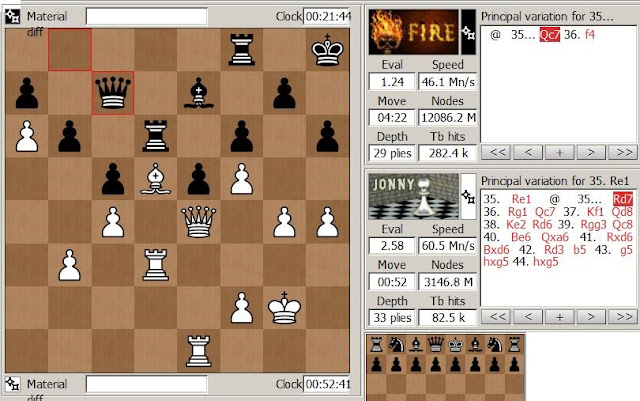 Jonny played f4 and opened the king side. After a series of exchanges the game reached a RB vs RB position, material was equal but Jonny's eval was winning. 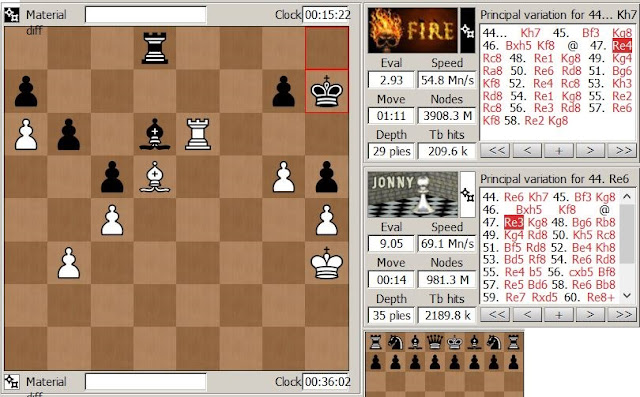 Fire could not defend the h pawn. The black king was trapped, Jonny captured a pawn and was about to capture another when the game was adjudicated.