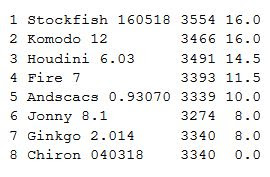 Only 6/21 games were decisive in RR4, the reverse games were more drawish than RR3.

Komodo was able to get one win back after its two losses in RR3. It had a 4.5/6 score and it joins Stockfish in the lead. Stockfish only scored 3.5/6, same as Houdini which is still in the race in 3rd place.

Jonny and Ginkgo are trying to draw as many games as they can. Both scored 2/6 in RR4 and they are tied at the bottom. Ginkgo has an advantage with two head to head wins.

Jonny - Komodo: Evals were slightly negeative and close to 0 until move 23. After a series of exchanges only RBB vs QR remained, Jonny with 2 extra pawns and Komodo's eval close to 2. The black queen was very active and the white king exposed, it took Komodo 20 moves to capture all the white pawns on the queen side, its 2 remaining passers secured the win. Komodo joins Stockfish in the lead with +7, Jonny last with -7.

Stockfish - Andscacs: Stockfish had an eval advantage from the start, and its eval constantly increased. After closing down the queen side Stockfish developed a crushing king side attack. The game was adjudicated before Andscacs started to lose material. Stockfish is leading again with +8.

Houdini - Ginkgo: Ginkgo went up a pawn on move 20, but it was Houdini's eval that started to increase slowly. The game reached a QRB vs QRB position on move 34, Houdini eval was less than 1, its king had better protection than Ginkgo's and its pawn structure was better. For more than 40 moves evals increased gradually, Houdini captured two pawns but not a lot happened. After a few exchanges only Q vs RB remained, Ginkgo seemed to be holding until it apparently blundered and lost the game. Houdini is still in the race with +4, Ginkgo joins Jonny with -7.

Komodo - Ginkgo: Komodo's eval began to increase after it locked pawns in the center. It attacked the king side and forced the black king to move to the center. Ginkgo had very little space for its pieces, it tried to defend by trading but Komodo was too strong. The game was adjudicated before Ginkgo started to lose material. Komodo with +8 is again joint leader, Ginkgo last again with -8.

Houdini - Jonny:Evals were close to 0 until move 45. Jonny started a series of exchanges on move 42 which led to a RRN vs Q position. It predicted this outcome but failed to notice that Houdini had a way to keep one last pawn. This was the difference between a draw and a win for Houdini, though it was very hard for me to understand the winning path. Houdini improves to +5, Jonny and Ginkgo are equal with -8.

Houdini had an eval advantage from the start, Komodo equalized by move 24. After a few exchanges the f file was opened, evals turned slightly negative and the engines started to shuffle. 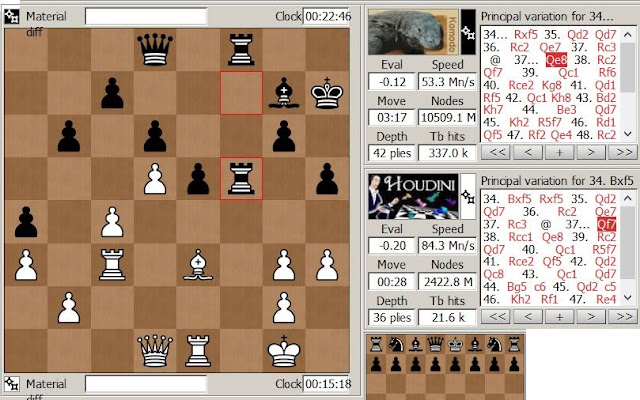 Komodo exchanged pawns on the queen side and created a connected pair of passers in the center. After exchanging queens only RRB vs RRB were left, Houdini had a passer on the queen side to counter the black center, evals were still close to 0. 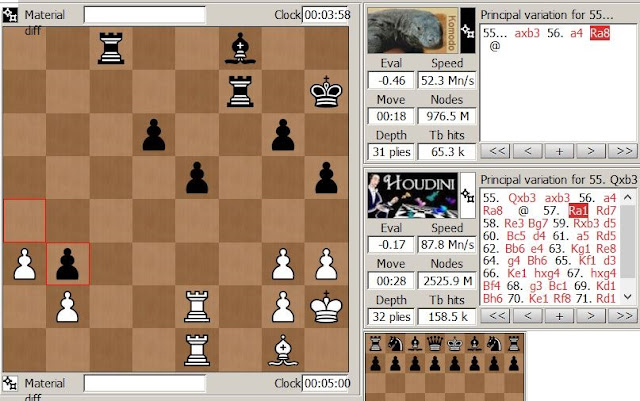 Both engines pushed their passers and the evals increased a little. The engines exchanged a pair of rooks, and Komodo created a 3rd passer. Evals remained relatively low despite all the advancing pawns. However, when two black pawns reached the 2nd file evals jumped. 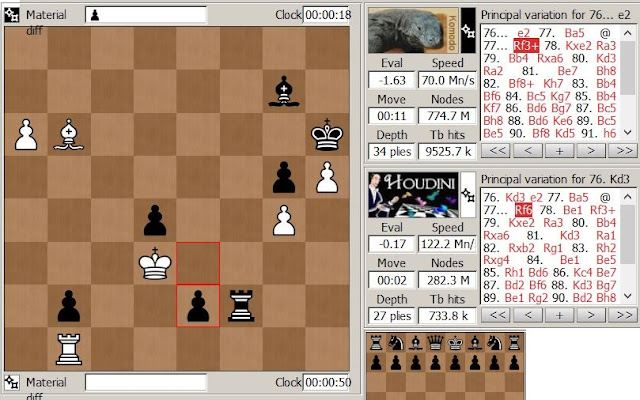 Both engines acknowledged that Komodo was winning, though the win was very complicated. Komodo captures the white passer and Houdini eliminated the b2 and e2 pawns. Komodo then brought its king forward and the PV showed how Komodo can win a piece and the game.