After 30 games Stockfish leads 8-5 with 17 draws. Both engines won a game pair, first game pair win for Leela. Stockfish continues to lead by 3 points.
Stockfish gave a pawn early in game 21, then the engines reduced to a RB vs RB position on move 21. Leela created a queen side passer and Stockfish blocked it with its pieces. The white king could not move forward and the engines shuffled for a long time. Stockfish ended the game with a perpetual check. In game 22 all the pieces were on the board on move 25 except for one white pawn and a pair of bishops. The white queen went forward and captured two pawns, Leela opened the king side with a rook sacrifice and attacked the white king. A long series of exchanges led to a N vs BN position with white two pawns up and low evals. The game continued for 60 more moves with pawn moves and exchanges before it was adjudicated.
Games 23-24 started with a 20-ply book in the Queen's indian, Petrosian variation, with black a pawn up.
In game 23 evals increased slowly after the start, and most minor pieces were exchanged. Leela opened a file on the queen side and doubled its rooks there. Evals peaked at around 1.5, then the pawns stabilized and the engines started to shuffle. After 35 moves a pair of rooks was exchanged and then queens as well. The engines continued to shuffle in a RN vs RB position, evals slowly came down. The rooks were eventually exchanged as well, the game was adjudicated on move 175.
There were less exchanges after the start of game 24, Stockfish's eval stayed around 1. The black pieces were pushed back and Stockfish had more space, but it didn't seem to have a clear plan. After move 30 Leela played a few moves that were inaccurate according to Stockfish, on move 35 Stockfish's eval jumped over 3. 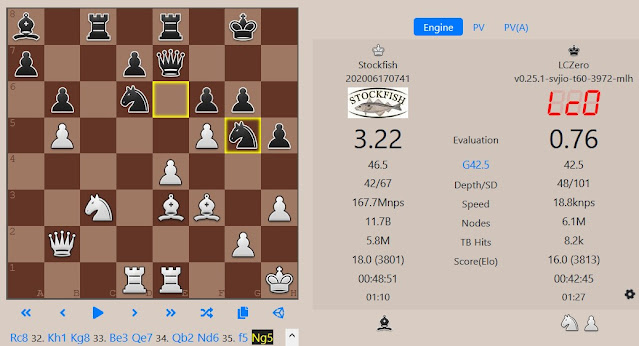 The white queen had a diagonal line of sight to the black king, Stockfish used the check to move the queen forward on the queen side, and a rook followed in the center. The attack on the black king included a temporary rook sacrifice, the attack was over in a QN vs RRB position on move 48. The material was close to equal yet Stockfish's eval was close to 10. Leela's eval was much lower, still hopeful. 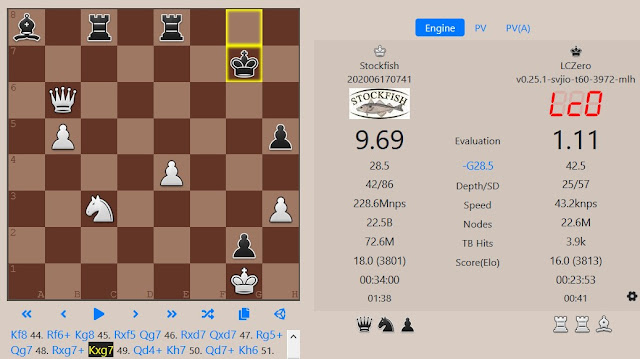 The queen danced across the board, giving checks and preventing any counter Leela might try. After 20 moves Stockfish captured a rook and the game was adjudicated. Stockfish wins the game pair, its lead increases to +4.
Stockfish was a pawn up early in game 25, evals were low around 0.5. Stockfish moved its king side rook and decided not to castle its king at all. Evals increased slowly as Leela increased the pressure on the king side. It pushed a pawn to h6 and threatened mate, Stockfish saved its king but its king side rook was trapped in the corner. 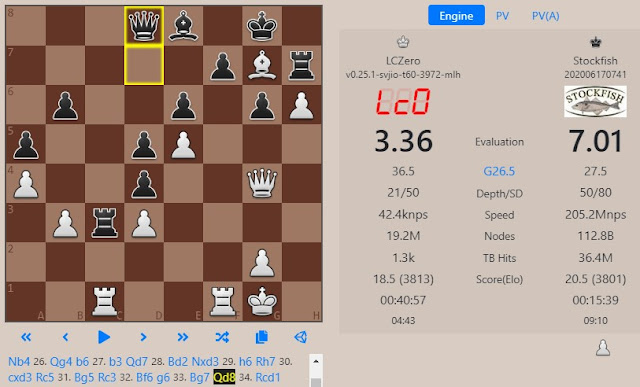 Leela traded its bishop for the rook, and the black queen got trapped in the corner. Leela's queen came forward and captured two pawns before Stockfish could untangle itself. 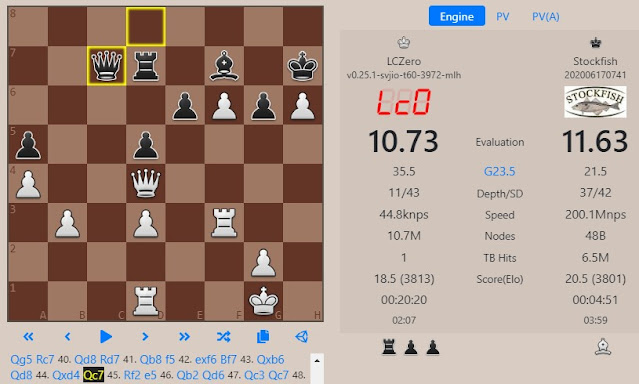 The game continued for a few more moves, but the material advantage gave Leela the win.
As before Leela was a pawn up in game 26. This time Leela chose to castle long despite the partial pawn cover on the queen side, and its king side rook was free to move. Stockfish's eval was around 1 as it slowly moved pieces to the queen side. Leela doubled rooks on the g file and created pressure on the g2 pawn and the white king. Stockfish had to defend carefully, its position seemed very hard to hold, yet its eval went over 2. 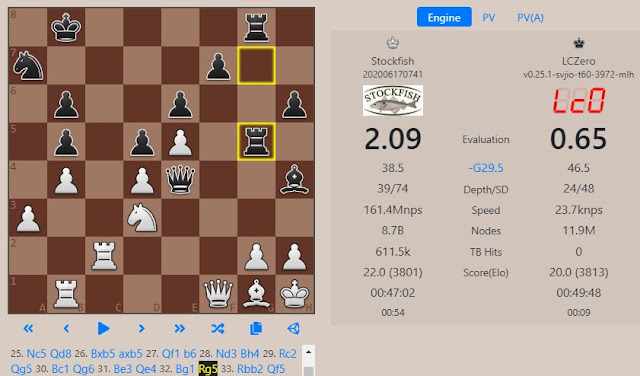 Leela saw its attack wasn't going anywhere but it was difficult to retreat, it tried to exchange queens but Stockfish refused. Stockfish opened another file on the queen side and its two rooks trapped the black king, preparing for the final attack. 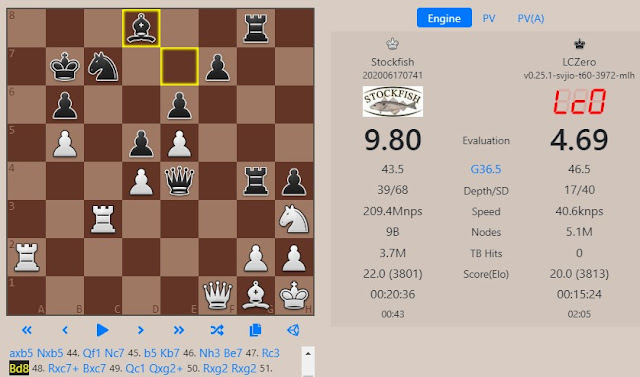 Stockfish traded a rook for the defending knight, the white queen left the g2 pawn and went on the atttack. Leela was forced to give its queen for a rook to avoid immediate mate, but it couldn't save the game. The white knight joined the attack and Stockfish won more material to win. Two white wins in this game pair, no change in the lead.
Games 27-28 started with black a pawn up. Stockfish's eval started at (negative) 1 in game 27, then came down after the engines exchanged a few minor pieces. After exchanging queens Leela had a bishop pair to compensate for the pawn. Evals were close to 0 after move 20, the engines continued to exchange pieces and Leela regained the pawn. In a king and pawns ending both engines promoted a pawn to a queen, the game ended in perpetual check. In game 28 Stockfish's eval again reached (negative) 1, then came down when the engines started a series of exchanges. By move 33 the game reached a knight ending, with adjudication 10 moves later.
Leela pushed pawns on the queen side in game 29. The black pieces were pushed back, Leela opened a file and one of the pawns reached a6. Evals slowly increased as the engines exchanged pieces and pawns, Stockfish couldn't get rid of the white a pawn. On move 31 the game reached a RB vs RN position. 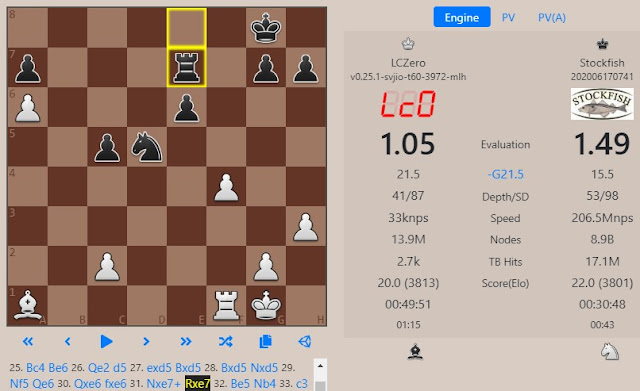 Stockfish could have taken the a pawn but chose not to do it since that would bring the white rook to the 7th rank. Instead Stockfish exchanged the minor pieces and reduced to a rook ending, its eval jumping as it realized it was losing. The kings moved forward and the pawns stabilized, Stockfish found itself in near zugzwang. Leela pushed a pawn to g6, creating a second entry point to the 7th rank for its rook. Leela's eval went over 2. 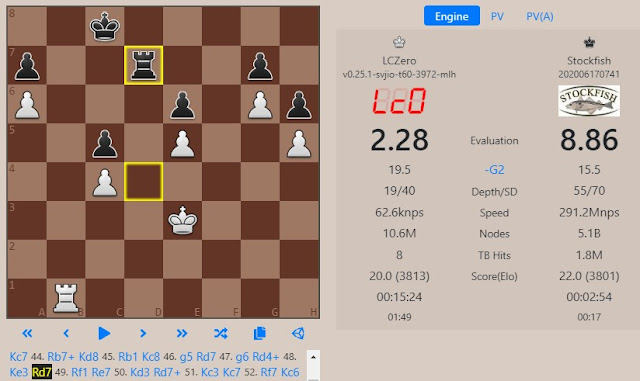 The white king moved to the queen side and threatened to penetrate. Stockfish had to move its rook to stop the king, allowing Leela to capture the e pawn. Leela took over the 7th rank, another black pawn was captured and the game was adjudicated.
In game 30 Stockfish went a pawn up tried to attack on the king side but was not strong enough. The engines exchanged pieces, Leela regained the pawn and evals came down to 0. The exchanges continued until the game reached a drawn rook ending. Leela wins a game pair for the first time in the match, the lead is back to +3.
Posted by Assaf Wool at 12:57 AM