After 20 games Stockfish leads 6-3 with 11 draws. There were two openings with two white wins each, Stockfish's lead is unchanged. Leela's performance is still a hot topic in the chat. My understanding is that a combination of Leela's software update and the way it uses the CPU on the GPU machine is making it 20% slower in the superfinal. It is not clear how much weaker this makes Leela, if at all. I think it is mostly a small sample issue. In any case I prefer to focus on the games.
The engines exchanged most minor pieces early in game 11. Stockfish pushed a pawn to f3 while Leela took over the center, the position opened and Stockfish went a pawn up. The game reached a QR vs QR position with low evals, the engines mainly shuffled or gave checks until the game was adjudicated. In game 12 again most minors were exchanged early, though the position was different. The game reached a QRR vs QRR position on move 28 with most pawns still on the board. The engines shuffled and evals came down, then the position opened and reached a queen ending. Stockfish ended the game with perpetual check.
In game 13 Stockfish chose to have a BNN vs Q imbalance early. Stockfish's eval was negative, it thought it had an advantage. The black king walked to the corner, Leela could take a rook for a bishop for many moves but it wouldn't give up its bishop. By the time the rook moved to safety evals became positive. All the black pawns were on the board and the black heavy pieces were not effective behind the pawn line. The engines opened the pawn wall on the king side, evals increased over 2 as Leela placed two minor pieces that blocked the pawns in the center and further limited the black piece movement. 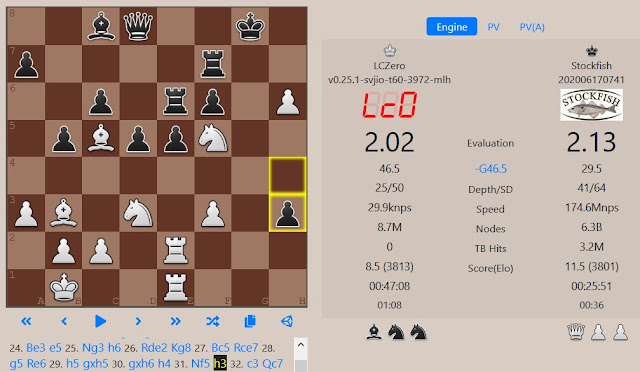 Stockfish gave a rook for a knight and opened the position. Both engines had advanced passers on the king side. Stockfish's queen was strong enough to keep several white pieces busy blocking the black passer. Eventually Stockfish lost the passer while reducing to a RBB vs RB position, evals were very high. 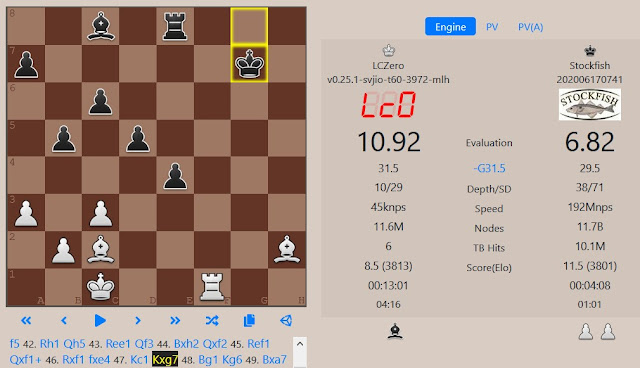 Leela had control of the dark squares, its DS bishop made sure the black pawns could not advance. The white king came forward, probably planning to attack the c6 pawn. The game continued for 20 moves before it was adjudicated.
Leela played more peacefully in game 14 and evals were close to 0. Leela had a bishop pair advantage and it went a pawn up on move 20, Stockfish controlled the center and its two knights were deep in black territory, one on the 7th rank. On move 27 Stockfish's eval suddenly jumped over 3.5, it seemed to gift a knight and sacrifice a rook but then it captured the queen and a bishop after a discovered check. The game reached a QR vs RRB position on move 33. 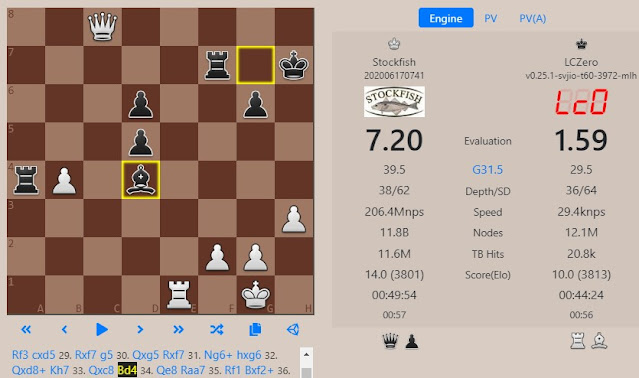 Stockfish was sure it was winning, Leela was not convinced. Stockfish protected the back rank to avoid mate, and it slowly pushed the b pawn forward. Leela countered with the d pawn, Stockfish captured the pawn and the engines exchanged a pair of rooks. 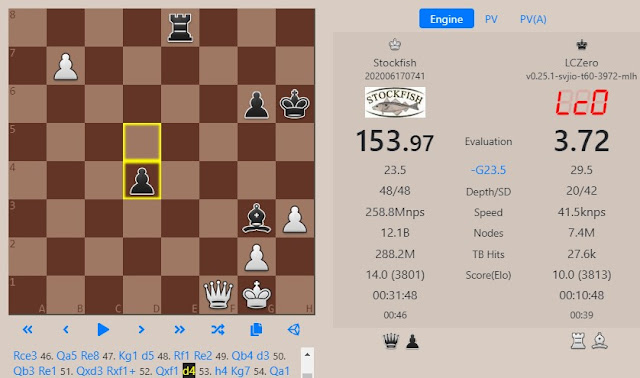 Stockfish had to juggle between giving checks and avoiding a back rank mate. It took about 20 moves to force the rook to leave the 8th rank and then Stockfish was able to promote its pawn and the game was adjudicated. There were two white wins in this opening, but the games were very different and the opening doesn't seem to be biased.
Games 15-16 started with the Budapest defense, white a pawn up. In game 15 the engines opened a file on the king side, exchanged a pair of rooks and the white queen came forward. A series of early exchanges led to a BNN vs BNN position with white a pawn up. Evals were over 1 for a while, Stockfish reduced to a same color bishop ending and moved its remaining pawns out of the bishop's reach. Leela's king could not move forward to attack the pawns and the engines shuffled for a long time. When Leela used its pawns to open a path for its king there were not enough pawns to win. In game 16 Leela avoided opening the king side and it regained the pawn early. Stockfish moved its queen forward, it captured 3 pawns on the queen side and then was traded for two black rooks. Evals came down, Leela opened the king side and threatened the white king. Both engines thought there was nothing to play for and the game was adjudicated on move 40, still with many pieces on the board. Both engines managed to hold in a difficult opening.
Games 17-18 started with a 31-ply book sequence, a popular line in the Sicilian Najdorf variation. White had a pawn on f6 and the g file was open, and the black king was stuck in the center. In game 17 Leela moved a rook to g7, daring Stockfish to exchange it for a bishop so its pawn would advance to g7. Stockfish refused and tried to attack on the queen side, Leela traded BN for R and stopped the attack. Leela created an advanced passer in the center, the black king's situation looked scary. 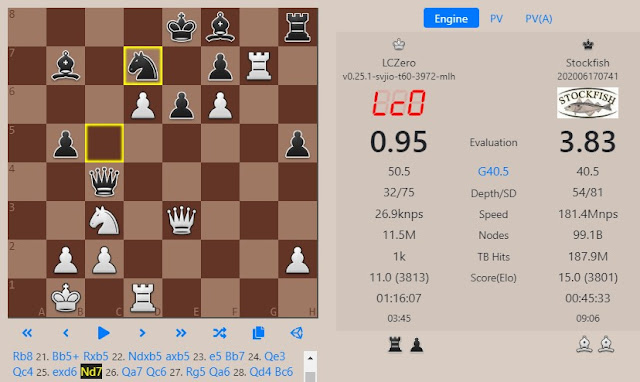 Stockfish had no choice but to capture the passer, opening the d file. The black king tried to find cover on the queen side, protected only by pieces. Leela used a queen exchange to get its f pawn to the 7th rank in a RR vs RBN position. 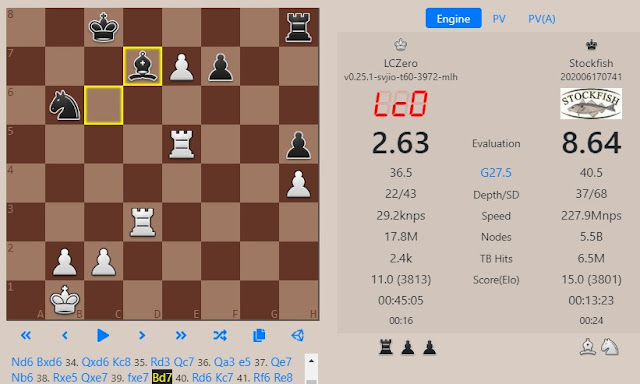 Stockfish captured the e pawn at the cost of losing its remaining pawns. The rook pair was very strong on an open board, eventually Leela captured the knight and the game was adjudicated.
In game 18 Stockfish's eval shot up and was already over 7 after playing 4 moves. It sacrificed a knight in the center and pushed its pawn to f7, forcing the black king to move. Leela captured the pawn, it was up a piece but its king was almost defenseless in the center. 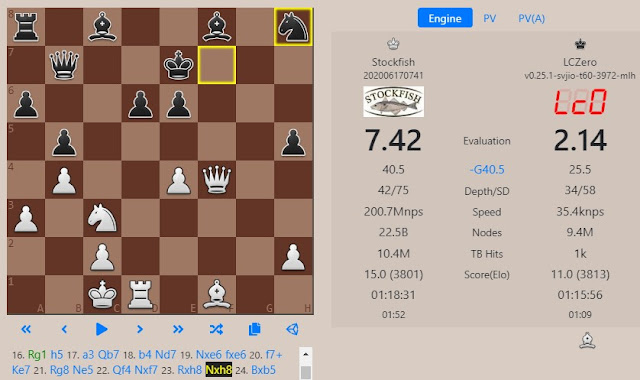 Stockfish sacrificed its bishop and cleared the way for its rook to join the attack. The white queen and rook attacked together, chasing the black king and regaining material. When the attack was over only N vs BN remained, Stockfish 3 pawns up. 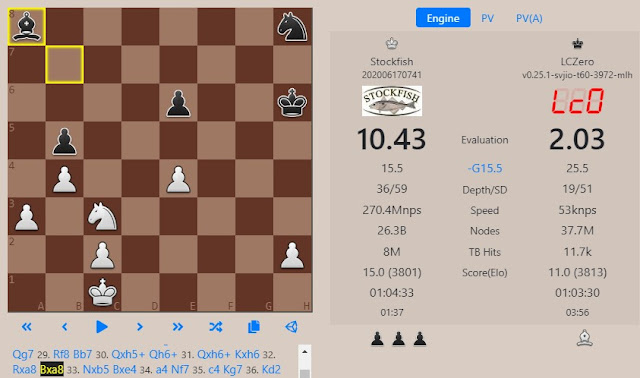 The white queen side pawns were unstoppable. Stockfish pushed them forward, Leela gave the bishop to stop a promotion and the knight ending was a win for Stockfish. There were two white wins in this opening, the evals suggest it was too biased.
The first capture in game 19 was on move 20, then a series of exchanges opened the position. The engines shuffled for a while and evals were low, Stockfish's eval jumped over 1 when Leela didn't retake a pawn and went on the attack instead. The engines exchanged queens and Stockfish captured a second pawn, its king was threatened by the white rooks and bishops together with a pawn on h6. After a series of exchanges the game reached a RB vs RB position, Leela went a pawn up with a passer. Stockfish's pieces prevented the passer advancing and the engines shuffled, evals came down and eventually Leela just gave the passer up. After a second long shuffle the engines reduced to a drawn 7-man position and the game was adjudicated. In game 20 Stockfish castled long and concentrated on the king side. After a few exchanges evals came down, Stockfish opened a file on the king side and Leela exchanged a pair of rooks. Stockfish doubled rook and queen and threatened the black king, Leela traded RB for Q and reached a QN vs RBN position. The queen side was locked, the engines exchanged knights and the white queen could not win the game on its own. The game was adjudicated a few moves later.
Posted by Assaf Wool at 11:58 PM