The crosstable after 9 rounds in stage 2 is: 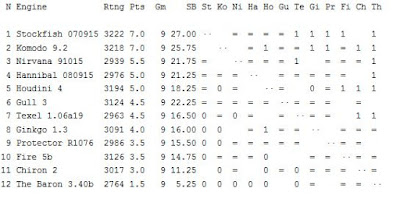 Stockfish and Komodo are standing out at the top, The Baron is clearly last, but the middle is still very tense. The reverse rematches will start in two rounds, and then we will see whether there were serious biases in the openings. I have a feeling the 2-move books were balanced enough and that the table is a good representation of the engines' real strength. The draw rate has improved a little and it is now 65%.


Komodo impressed with three straight wins, it has caught up with Stockfish. Their first head to head this season will be in round 11 and will probably break the chat viewing record, although it probably will not affect their qualification for the next round.

Houdini survived its game against Stockfish, but it lost to Ginkgo after having a steady advantage and could have had an easy draw. In one of the big surprises of the stage Ginkgo managed to slowly convert a closed game into a win, applying pressure with a passed pawn on the queen side and at some point trapping Houdini's queen on the opposite corner. Houdini is now 5th and will have to work hard to qualify. Is this the first season where more engines manage to overtake Houdini? With a few more losses it may not qualify for next stage.

Nirvana decided to finish its drawn rook endgame against Chiron in style instead of waiting for the 50 move rule. It allowed Chiron to queen a pawn for a rook, and then built a fortress in a Q vs RPP endgame. Chiron was sure it was winning for 40 moves until it realized the game was a draw.

After beating Houdini there was a possibility that Ginkgo could at least hold against 'the lizard', but it was not to be. A few moves into the game Komodo had a small advantage with a pawn majority on the queen side. 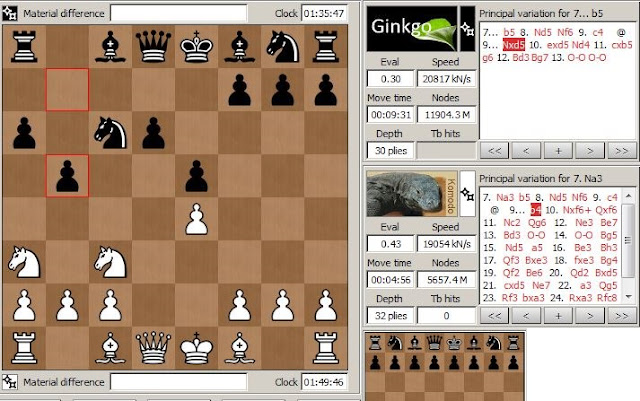 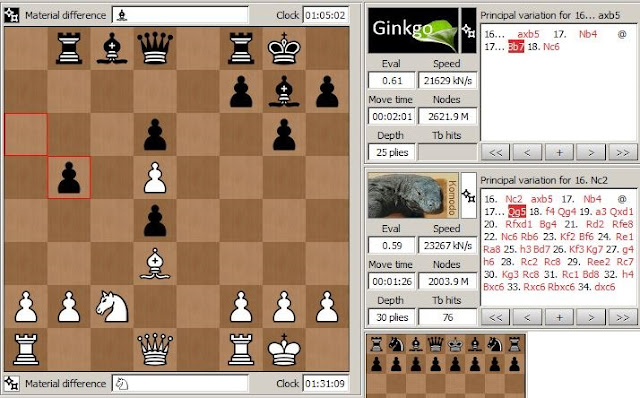 The white knight was on the way to c6 forcing black's pieces to move away. On the king side the black rook and bishop were too far and could not join the defense without wasting many moves. Queens were exchange and Komodo gave a rook for a bishop to gain strong connected passers on the queen side. 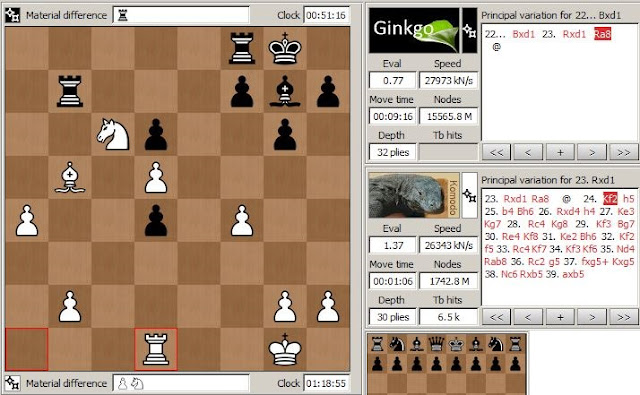 The white king raced to join the action, while black could only wait since its rooks could not penetrate the white diagonal wall. 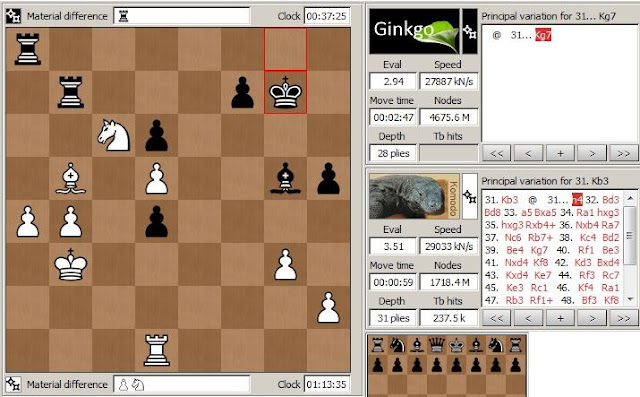 Ginkgo was totally lost. The white pawns advanced with the king behind them, and the game was stopped before black lost both its rooks to stop the queenings.
Posted by Assaf Wool at 3:56 PM