Stage 1a is over, and the final results are: 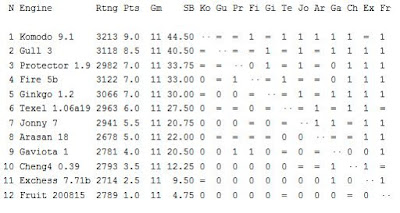 The qualifiers are Komodo, Gull, Protector, Fire, Ginkgo and Texel. This is the same list as the one I predicted after 8 rounds, and indeed Jonny, Gaviota and Arasan could not catch up to the leaders. Jonny tried, winning all its last games, but the hole it was in was too deep to climb out of. The qualification was determined after 10 rounds, the last round was just for fun.

Arasan's last three games were draws against Ginkgo, Protector and Fire. All three are qualifiers - respect. I hope its ratings increases significantly, it also had a respectable performance in season 7 and it deserves a raise.

Komodo had two draws in the last three games, one of them against Exchess. Its only win was in the last round against Texel, and I feel that if Texel was not moving on the 30s increment for the last 35 moves it could have held a draw as well.

Ginkgo lost on time against Protector, in a balanced position after 19 moves.That's a total of 2 games with an unnatural ending in the stage, which is not too bad. Fortunately, these games did not affect qualification.

Fruit exchanged a rook for a bishop and pawn early in the game, but the game was judged to be balanced by both engines. Gull thought it had a small advantage after the queens and knights were removed: 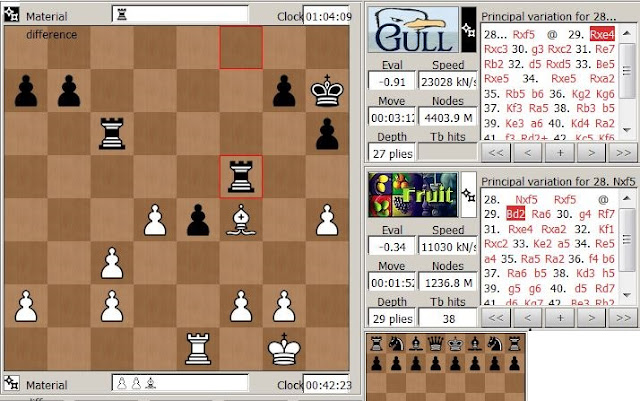 Both sides cleared a few pawns, and by move 39 there was a rook exchange: 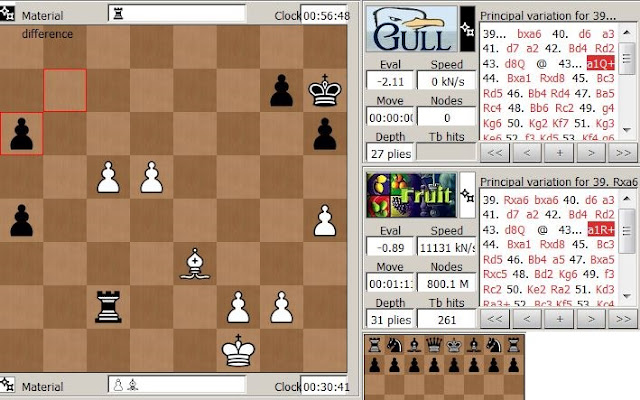 Now the strategy for Gull was clearer. The central white pawns could not be stopped but so was black's a4 pawn. Soon both sides queened and had their queen taken: 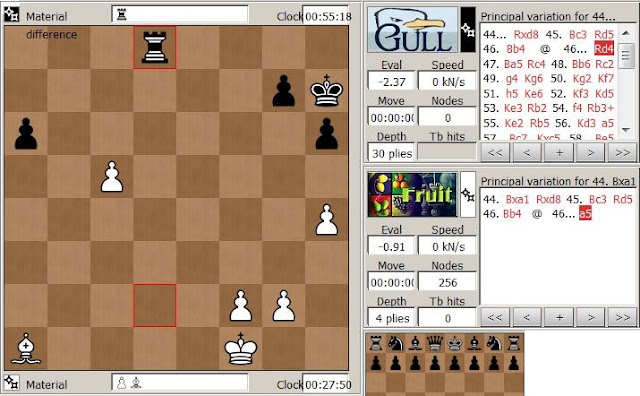 Now Gull would gladly exchange a rook for the bishop and central pawn, its A pawn will force the white king away from defending the king side, letting the black king to finish the game. I especially liked the position after move 52: 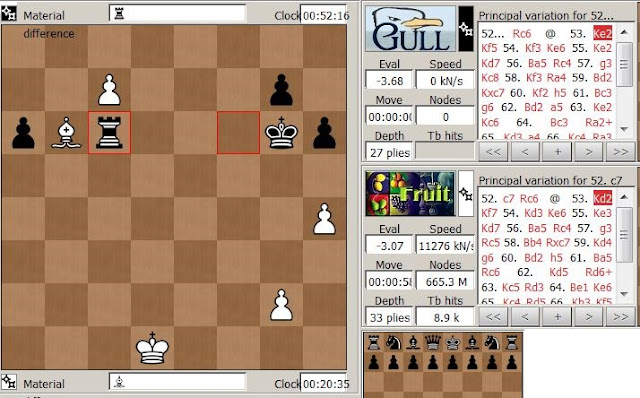 The pawn cannot advance, the bishop must stay to defend, and the rook cannot take the bishop. Black's king though has time to go to d6, allowing the pawn to be taken. Fruit decided not to exchange its bishop as well, but the game was over in any case. The amazing thing is that Gull completed this endgame without the use of tablebases.