The final results for group 1b are:

The six qualifiers are Stockfish, Houdini, Hannibal, Nirvana, Chiron and ... The Baron, believe it or not. Equinox and Junior were not allowed to qualify because of their multiple crashes (Pedone too but well...). This was especially sad for Equinox which played at a high level when it didn't crash. The Baron won't stand a chance in stage 2.

Crash report: Equinox crashed against Houdini late in their game, while having a small advantage as black. Junior crashed on the first move (second time this happens), forfeiting the battle for sixth place. Pedone crashed on move 9 against Junior, saving Junior from another crash.

Stockfish converted another rook ending which appeared to be drawn against Scorpio. Altogether Stockfish obtained a perfect 11/11 score in this round, remarkable. Yes, three wins were crashes but this just demonstrates the fear other engines have of Stockfish.

Crafty managed to get 1.5 points in the last two rounds, including a win against Nightmare. Not too bad for a low ranked last minute replacement.

This was the battle for second place in group 1b, Hannibal in third had to win to overtake Houdini.

After 16 moves the position was: 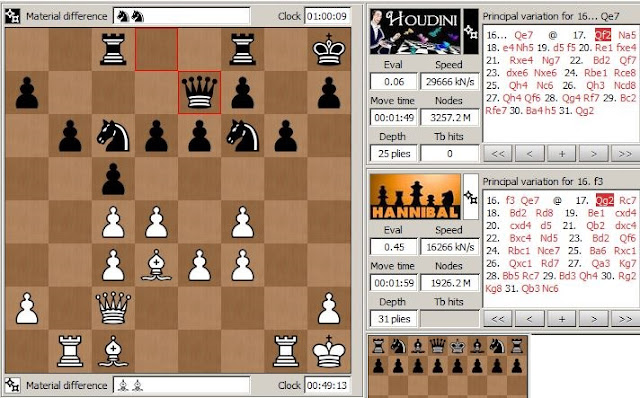 Hannibal thought it had a small advantage. All the pawns were still on the board and white's pawn structure was unusual with two doubled pawns. Cute pattern though. A few moves and a pawn exchange later there started a long stretch of shuffling moves by the engines. Both seemed reluctant to advance pawns and the game appeared to be heading for a draw. Things started to change when Houdini took initiative and opened up the position a little.

Hannibal's forces on the king side were not enough for a significant attack, and when the dust cleared after some exchanges black had strong connected passed pawns on the queen side. 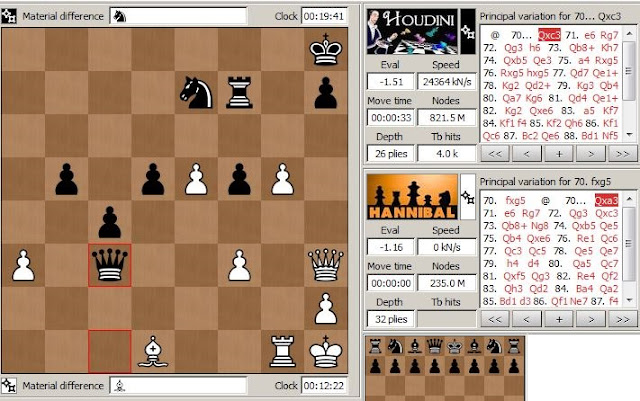 Ultimately Hannibal had to offer a bishop to get rid of these pawns, leading to a lost position. 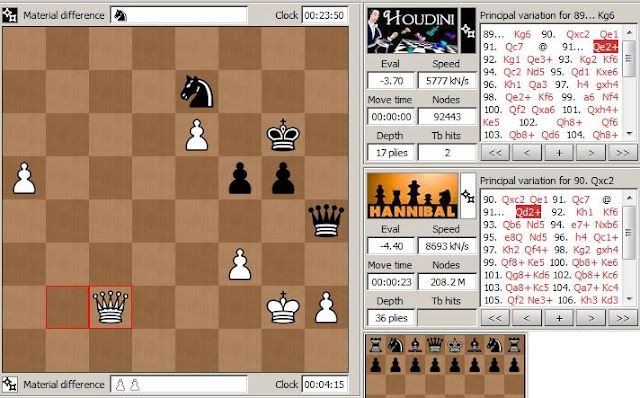 White soon lost its passed pawns, and though it was still not clear for me how to win the two engines agreed that white was lost. Houdini managed to finish second, Hannibal a respectible third.
Posted by Assaf Wool at 4:34 PM