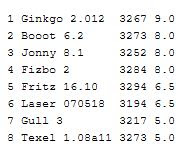 Division 1 completed 2 of 4 RRs, what a contrast this division is to division 2. There were no crashes, the draw rate is higher at 58.9%, the games are longer. It feels like the engines in this division take chess more seriously. Every engine has won and lost at least one game, there are no games where the result is known in advance.

There are 4 engines with a good chance of promoting to the premier division. Ginkgo is currently in the lead, 1 point ahead of Booot, Jonny and Fizbo. Fizbo and Ginkgo were relegated from the premier division in season 11, and it is not easy to get back.

Gull and Texel are in the relegation zone, 1.5 points behind the nearest rival. Texel may be on its way back to division 2, where it played earlier in the season. It is sad to see Gull in danger of relegation, it was a top engine a few seasons ago but has not been updated for a while now.

Ginkgo - Gull: The game reached a QRN vs QRB position on move 31, Ginkgo saw a win and reduced to a N vs B ending, it took Gull 9 moves to see it was going to lose. This was the first decisive game of the division. The reverse was a draw.

Jonny - Fritz: Jonny gave a rook for a knight and pawn, exposing the black king. Fritz counter-attacked the white king, and the game reduced to a RB vs BN position and a win for Fritz. This was the first win in black in the division.

Fizbo - Texel: Texel was two pawns up and it tried to attack on the king side. Fizbo's king hid behind a black pawn and was completely safe. Fizbo counter-attacked and Texel's position collapsed quickly. In the reverse Fizbo had a bishop pair advantage in an open position. It gave a rook for a knight and created a connected pair of passers that secured the win. A double win for Fizbo, leading the table.

Gull - Laser: Gull opened the king side after 34 moves and Laser gave a knight to stop the white rooks from invading. This led to a QBB vs QB position with Gull two pawns behind,  and an unstoppable passer on the queen side was enough for a Gull win. Gull can still be strong, though it hasn't changed in years and has no tablebase support.

Booot - Fritz: Booot opened the king side with a pawn storm, the result was a pawn up for Fritz with both kings uncastled in an open position. Booot's pieces soon had the black king in a mating net, Booot pushed passers on the queen side and Fritz' defense collapsed. In the reverse game Booot exchanged many pieces and equalized quickly.

Gull - Fizbo: Gull was two pawns up and had an eval of over 2, but it failed to notice the danger to its king. Fizbo found safety for its king behind a white pawn and then created a mating net with pawns in the center and rooks in an open file on the king side. Gull realized too late that it had no defense without losing material.

Fritz - Texel: Fritz gave a rook for a bishop and two pawns, it thought it was slightly better with a queen side passer and a bishop pair. Texel used its pieces to attack the white king and force a queen exchange, evals turned negative. The game reached a BN vs RB position and seemed to be heading for a draw, when Fritz blundered, exchanged pawns and reduced to a black won 6-man position. Apparently Frits only used a 5-man tablebase, and it took 25 moves for it to see the loss.

Gull - Jonny: After a very long shuffle in a QBN vs QBN position Jonny found a way to improve after move 100, with time running out. After exchanging queens it won two pawns while Gull placed a passer on the 7th rank. Jonny blocked the white passer and pushed its own pawns, Gull was forced to lose its pieces to stop them. In the reverse game Jonny trapped a black bishop and was a pawn up by move 20, with eval over 2. After creating a central passer and exchanging most pieces Jonny won the game easily. With this double win Jonny has a positive +1 score, while Gull is sinking with -3.

Texel - Ginkgo: Texel had an eval advantage and was two pawns up on move 25, then in a very complicated position Ginkgo found a surprise move, and 10 moves later at the end of a series of exchanges Ginkgo was up a rook for 3 pawns. The game was soon over. In the reverse game Ginkgo kept its initial advantage, it gradually exchanged pieces until reaching a rook ending. The material was balanced but the white king and pawns were much better, Ginkgo soon had an advancing passer that Texel couldn't stop. A second double loss for Texel, it joins Gull at the bottom with a -3 score. Ginkgo joins Fizbo at the top with a +3 score.

Booot - Laser: After many early exchanges the game reached a BB vs R imbalance on move 25. Laser had two extra pawns while Booot had a central passer, its bishop pair very strong in an open position. Evals increased gradually, after exchanging queens Laser gave a rook for a bishop to remove the black passer. The remaining RB vs R position was a win for Booot. Laser with a second loss is close to the relegation zone, Booot with a second win is close to the top.

Gull - Booot: Gull had a strong pair of knights deep in Booot's territory, it used an open file on the king side to threaten the black king. Booot gave a bishop and reduced to a NN vs N position, but Gull kept enough pawns alive to secure the win. This was the first loss for Booot in the division. In the reverse game Booot had a space advantage and evals increased gradually. Gull's king was exposed and its pieces on the wrong side of the board. Gull gave a rook for a knight, but the pressure on the king gave Booot the win. First opening with two white wins.

Laser - Texel: Laser was a pawn up in a RRB vs RRN position. Apparently Texel blundered and gave a second pawn, it realized the mistake a move later. After a series of exchanges evals were over 2 in a RR vs RN position, Laser's queen side passer secured the win. This was Laser's first win in the division.

Fizbo - Ginkgo: The engines castled in opposite directions, Fizbo pushed pawns on the king side and opened a file with a pawn reaching the 7th rank. Ginkgo remained calm and exchanged pieces, its eval around 0.5. Fizbo's eval was over 2 but seemed to be stable, but it jumped when Ginkgo gave a rook for a bishop. Ginkgo regained the material a few moves later, but then it also realized the resulting rook ending was lost. In the reverse game Ginkgo won, see featured game below. Another biased opening, first losses for both Ginkgo and Fizbo, both still in the lead.

Booot - Jonny: The game started with balanced evals, on move 21 Jonny took the initiative and attacked the exposed white king. The attack lasted more than 15 moves until queens were exchanged, Jonny's eval remained above 2. Booot reduced to a rook endgame a pawn down, Jonny's pawns were better and it was able to convert the win. Jonny gets closer to the leaders with a score of +2.

Laser - Fritz: Laser had an eval advantage from the start that was close to 2 on move 20 and kept increasing. On move 30 Laser was 2 pawns up, then it exchanged pieces until reaching a rook ending and an easy win.

Booot - Fizbo: Fizbo was happy with its opening for the first 20 moves, then evals started to turn in Booot's favor. On move 29 only QRB vs QRB remained, Booot pushed a central passer that got to the 7th rank with eval over 1. Fizbo tried to counter by attacking the white king, eventually Booot combined the queening and checks on the black king to win a piece and the game. Booot staying close to the top with +2.

Laser - Ginkgo: The engines had a few exchanges, then they stabilized the pawns and started to shuffle. On move 78 Ginkgo gave a rook for a knight and pawns, broke through the center and destroyed the white king's defense with its advancing pawns. Laser had to lose material to avoid mate, but it was lost in any case. Ginkgo takes the lead with a +4 score.

Fritz - Gull: Fritz was a pawn up in a RB vs RN position. For a while Gull held the position, but after reducing to a rook ending the black pawns started to fall and Fritz won. Gull joins Texel at the bottom with a -4 score.

Ginkgo was ahead on eval, it pushed pawns on the king side and threatened to expose the black king. Its own king remained uncastled in the center and Fizbo gave a pawn to open the center, and then seemed to ignore its rook being attacked. 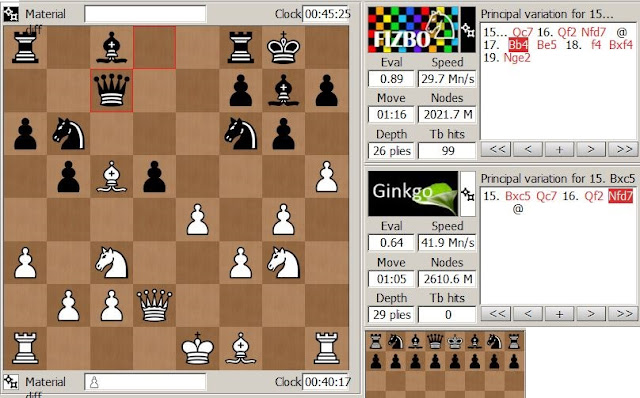 For 5 moves the rook remained under attack and Ginkgo did not take it. Each move Fizbo had a different threat that Ginkgo had to defend against first. Finally the rook moved away, but now Ginkgo captured a hanging knight and was a full piece ahead on move 22. 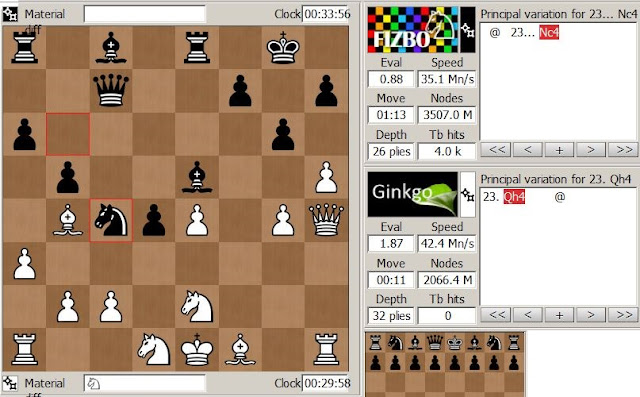 Fizbo's eval was below 1, it compensated by attacking the exposed uncastled white king. The white bishop was also blocked in the corner and weak. However, evals continued to increase as Fizbo's attack was not effective and Ginkgo had a king side threat on the black king. 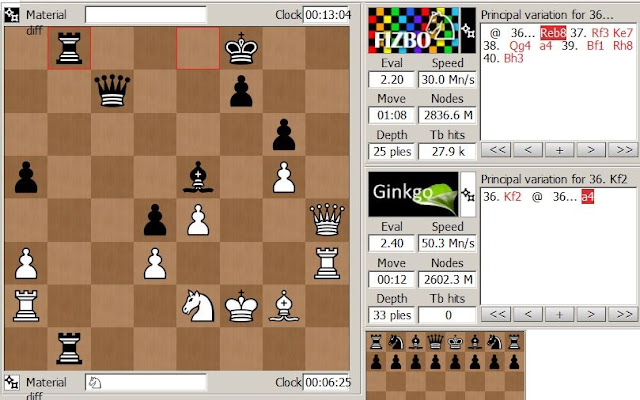 After both kings found relative safety the piece advantage became evident. Ginkgo forced its way on the king side, it untangled its knight and started to make mating threats. Fizbo couldn't protect its king side pawns and the added threat of a white passer finished the game.