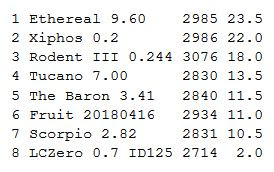 Ethereal and Xiphos are promoted to division 3. Ethereal did not lose a game in the division and led from the start. In the early rounds Rodent was close to the top of the table, but with 4 losses to Xiphos it finished 3rd.

Scorpio crashed 7 times, mostly on the very first move after book. This is disappointing since its performance was better than it was in season 11 in the games it did finish. According to the 3-strike rule all its games are removed and it is automatically relegated (though there is no relegation in division 4). The formal crosstable taking this into account does not change the standings significantly.

Leela's games (LCZero) attracted a lot of attention, as it is a community effort and a different approach to the search and score algorithms in other engines. The project is trying to use the same learning approach of Google's Alpha zero, using normal hardware and public resources for training the neural nets. In division 4 it had several interesting games but it lost almost all of them (its single win was a Scorpio crash...), usually blundering in the middle and endgame even if it had an advantage. The project is rapidly evolving and there is a good chance it will perform much better in the next season.

Division 3 is about to start, with the engines Bobcat, Wasp, Nemorino, Pedone, ChessBrain and Senpai joining Ethereal and Xiphos. The format will be identical to division 4, 4RR with 30+10 time control. I expect division 3 to be a more exciting event than division 4, with a higher draw rate and closer scores. According to the CCRL rating list the engines are quite close. Ethereal's author appears regularly on the chat and thinks its engine should promote again, in season 11 it finished last in division 3 so that would be a significant improvement.