After 20 games Stockfish leads 3-0 with 17 draws. Houdini is still looking for its first win, so far it hasn't been able to use the biased openings to get winning chances.

Evals were close to 0 in game 11. After a series of exchanges both engines attacked their opponent's king, Stockfish gave a rook for a knight and then found a repetition through perpetual check.
In game 12 Stockfish grabbed space on the queen side, creating a pawn line that reached the 3rd rank. Evals were low and in favor of Stockfish with almost all pieces on the board. 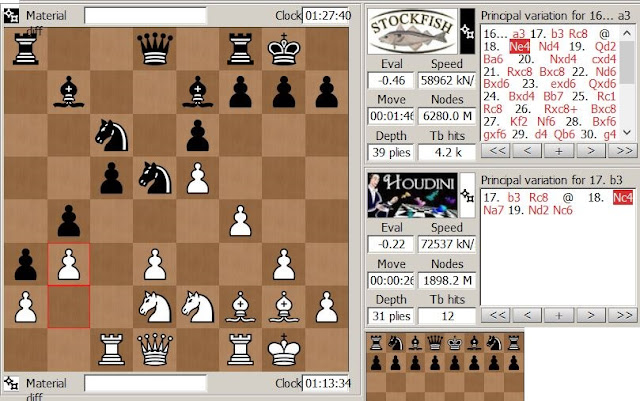 The engines shuffled for a while, then Stockfish gave a rook for a bishop and pawn. With the white LSB gone Stockfish took control of the long diagonal with a direct view of white king in the corner. Houdini had to be careful not to be mated, but its low eval indicated everything was under control. 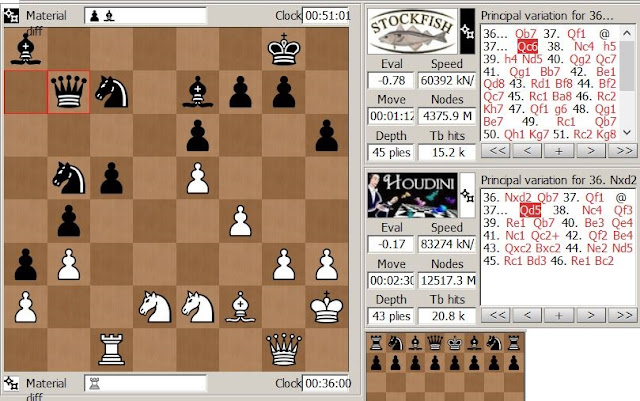 There was a long period of mainly shuffling, with a few pawn moves stabilizing the king side and a pair of knights exchanged. After more than 50 moves with both engines short on time Houdini blundered and allowed Stockfish to exchange queens. The white pawns became targets, Houdini couldn't defend them all and Stockfish captured one on the king side. After exchanging knights Houdini's position collapsed. 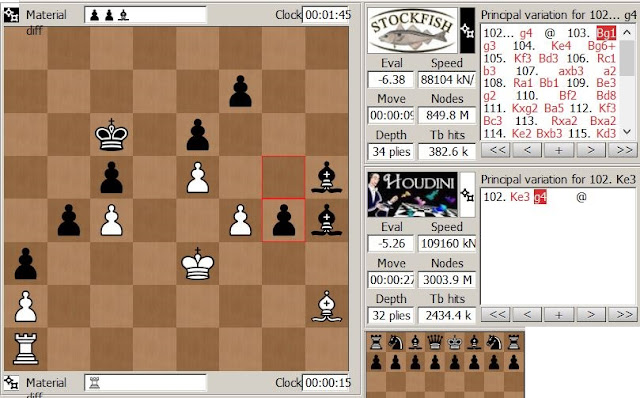 The white bishop pair was very strong, together with pawns on both sides of the board Stockfish was winning. The game was adjudicated before Houdini started to lose material. First win in black for Stockfish, leading 3-0 in the match after 12 games. Is this going to be a one-sided superfinal?

Game 13 started with a pawn advantage for Stockfish, eval close to 1. By move 25 Houdini regained the material and had two advanced passers on the queen side. Houdini gave a rook for a knight to break a king side counter attack by Stockfish. Evals were close to 0 when Stockfish found a perpetual check repetition. In game 14 Houdini kept the pawn and created a queen side passer as white. Evals jumped above 0.5 as the passer reached the 6th rank. Stockfish stopped the passer on the 7th rank, exchanging pieces to get a drawn opposite color bishop ending.

In game 15 most pieces were gone by move 28, the game ended in a repetition in a QB vs QN position. In game 16 all the bishops were gone by move 21, and then the engines started to shuffle while stabilizing the pawn lines. On move 86 Stockfish opened up the king side, and then the engines traded everything until reaching a tablebase draw.
.
In game 17 Stockfish had an eval advantage below 1 for the first 25 moves. Houdini broke through the king side and started a series of exchanges until reaching a rook ending and a tablebase draw. Stockfish forced an early queen exchange in game 18. Evals stayed low as the engines exchanged their pieces, the game reached a drawn rook ending.