After 50 games Stockfish leads 13-1 with 36 draws. At the halfway point Houdini has still not won an opening minimatch, Stockfish is constantly better as white and as black.

Stockfish had an eval advantage in game 41, with more space for its pieces. Stockfish opened the king side and threatened the black king through open files. Houdini traded pieces and the evals dropped to 0. The game reached a drawn rook ending.
Evals were low in game 42, Houdini had more space. On move 25 Houdini gave a pawn, opening files on the queen side for its pieces. Stockfish blocked the file with its knight, and when Houdini exchanged the knight both engines had passers on the queen side. 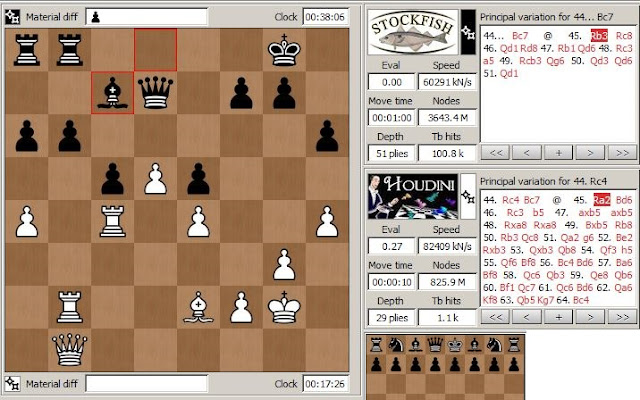 Essentially nothing happened in the next 90 moves. The engines shuffled pieces and made a few pawn moves. Both engines had very little time left when Stockfish opened the position. Evals became negative but still small, the expected outcome was still a draw. 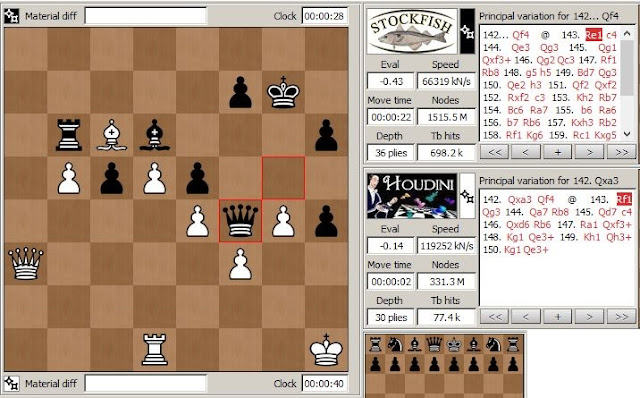 The engines were in blitz mode, Stockfish's eval started to increase as it exploited its control on the dark squares. It gave a pawn to open a diagonal for its bishop and soon Houdini's king was in a mating net. Houdini gave a rook for a bishop and Stockfish's eval jumped. 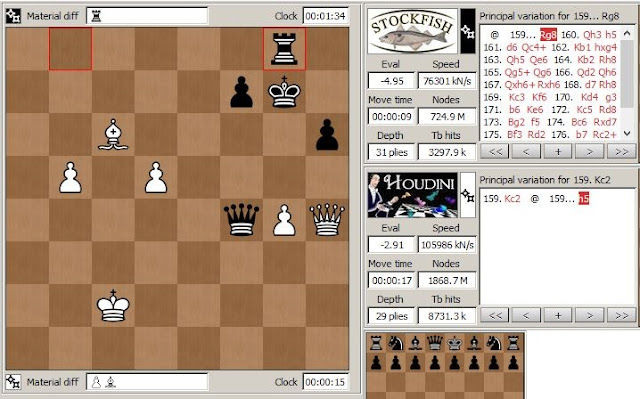 Stockfish exchanged queens, the B vs R ending was a win for white. The game should have been a draw but Houdini lost it in time trouble.

Stockfish started game 43 with an eval advantage. There were several early exchanges, material was even, Stockfish had a bishop pair and a pawn advantage on the queen side. 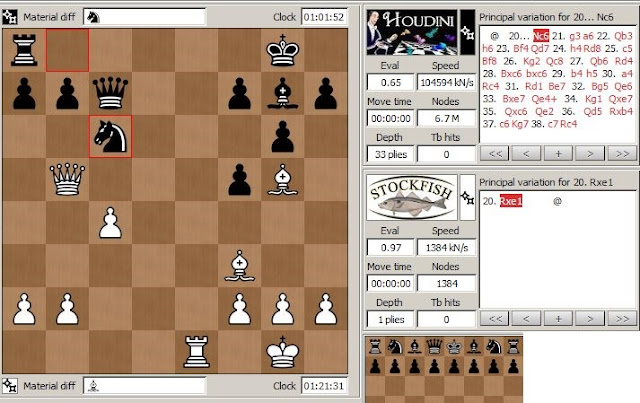 Evals continued to increase, after exchanging queens Stockfish won a pawn. This didn't change the pawn structure, only removed the black double pawn, yet Stockfish's eval was already over 3. A few moves later the game reached a rook ending. 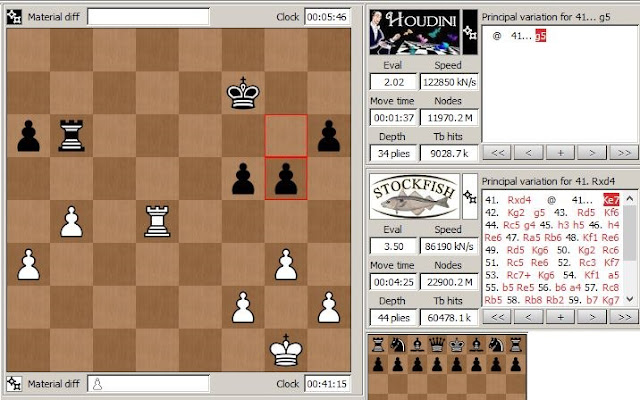 There were pawns on both sides of the board, with a pawn advantage for white on the queen side. This was enough for a Stockfish win, the game was adjudicated 10 moves later.
In game 44 evals stayed low throughout the game. The engines gradually exchanged pieces until reaching a rook ending, this time with even material. Houdini had a queen side passer but that was only good for a draw.

Stockfish had an eval advantage in game 45, it captured a pawn and had more space with eval over 1. Houdini exchanged pieces when it could, reducing to a QR vs QR position. The engines shuffled with evals slowly dropping, until reaching a 50-move draw. In game 46 Houdini was a pawn up in a more open position with evals close to 0. Stockfish reduced to a QR vs QR position, it used an attack on the white king to get the pawn back. After exchanging queens the rook ending was drawn.

Game 47 started with Stockfish a pawn up. Houdini exchanged queens early and the engines continued to trade pieces until reaching a rook ending and a draw. In game 48 evals were low. Houdini's king was exposed in the center and Stockfish won the pawn back by attacking the king. The engines traded pieces with evals at 0, the game continued for 30 moves in a drawn rook ending until the pawns stopped moving.

In game 49 Stockfish had an eval over 1. The engines exchanged pieces in an open position, by move 30 only RRB vs RRN remained. Stockfish captured a pawn and had a queen side passer, but with the kings exposed the rooks could give checks and the game reached a repetition draw. Houdini kept its king uncastled in game 50. Stockfish gave two knights for a rook and attacked the white king. Stockfish then sacrificed a rook and got a perpetual check draw.