Game 29 started with white a pawn down. By move 19 Stockfish gave a rook and another pawn for a bishop, with a strong attack on black through the center. Komodo's king couldn't castle, and after exchanging several pieces it had to give its queen for a rook and bishop in order to get out of the attack. After move 33 only Q vs RR with pawns remained. Stockfish had a small eval advantage but after most pawns were taken Komodo forced a perpetual check for the draw.
In the reverse game 30 Komodo was a pawn down but had a strong initiative and an eval advantage of 1.5, with Stockfish unable to castle and forced to defend. Most pieces remained in play and by move 30 Stockfish built a pawn wall across the board, which appeared very strong. 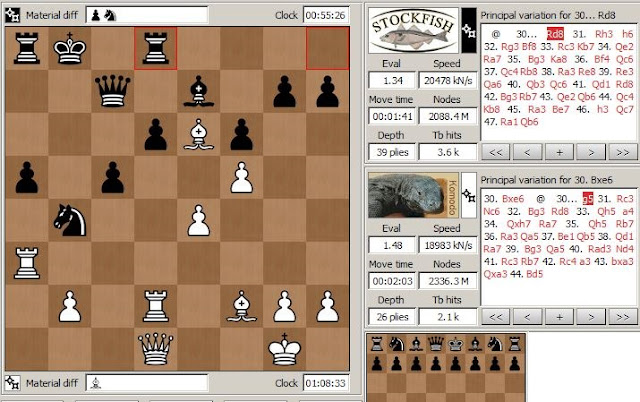 After a long stretch of shuffle moves with very few pawn moves, and with the 50-move counter down to 10 there was a bishop for knight exchange. The evals remained steady for a few more moves, but then started to increase for no apparent reason. Komodo's advantage became evident when it forced a queen and rook exchange and won two pawns. 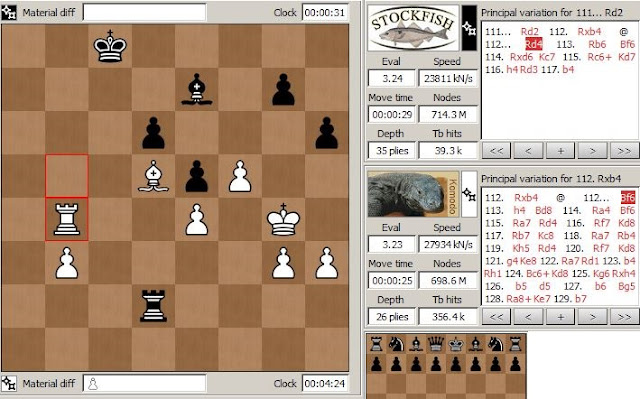 Stockfish could not stop the passer or the white king on the queen side, and Komodo won a few moves later. This was Komodo's first real win of the match, and it came out of what seemed to be a sure draw - the only advantage Komodo has over Stockfish that we've seen so far in this match.

Game 31 started with many exchanges in the center, leaving only QRRB vs QRRB after 20 moves.  Stockfish had a small eval advantage, probably because of Komodo's weak pawns. 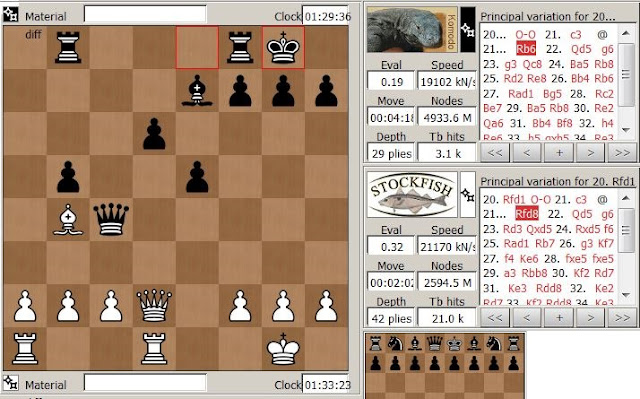 Stockfish continued to apply pressure on the black pawns, with eval climbing slowly. After queens were exchanged the evals were at about 1, and there followed a series of moves where Komodo lost a pawn while exchanging most pieces. 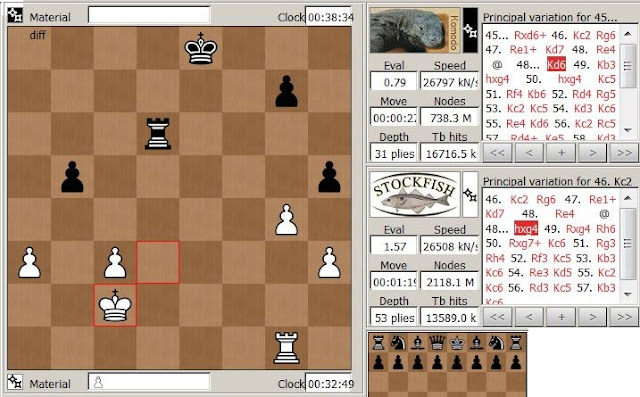 Usually a pawn advantage is not enough for a win in rook endings, even two pawns in the f+h (a+c here) case which was possible in this position. However, here Komodo chose to exchange on the g file and Stockfish immediately saw a path to victory. Komodo realized it was losing a few moves later. Was it a forced win for Stockfish or a Komodo blunder?

Game 32 had a similar beginning, with the same pieces remaining on move 20. The difference was that now both engines had a few weak pawns on the queen side. The queens were exchanged quickly, and the rooks a few moves later, by move 28 only B vs B with pawns remained. The kings could not penetrate the pawn lines, and it took more than 50 more moves for the engines to agree that the game was a draw. Stockfish struck back immediately and the score at the halfway point was 6-2 with 24 draws.