Division 2 is finished and the qualifiers for division 1 are Jonny and Laser.

The final crosstable is 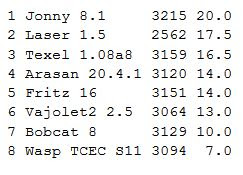 The final draw rate is 56/112 (50%). There were more draws in the second half of the division, the bottom two engines had much better results and this is reflected in their score and in the draw rate.

Laser and Texel were very close from the start to the very end. Laser lost its lead after RR 3 with a loss to Bobcat, its only loss in the division. In RR 4 Texel lost twice, against Bobcat and Arasan, Laser regained the lead and held it to the end. This is Laser's second promotion of the season, after starting in division 3.

Bobcat and Wasp are the bottom 2 engines and will be relegated to division 3 next season. Bobcat scored 6 points in the second half of the division, with 4 wins, but could not close the gap after its poor score in the first half.

There were no crashes in the second half of the division, Fritz' crash in the first round remained the only crash of the division and had no impact on the final results.

The qualifiers will now join Andscacs, Booot, Gull, Fizbo, Hannibal and Nirvana in division 1. Based on the results of season 10 I would assume that Andscacs, Booot and Gull will fight for promotion and the rest will fight against relegation. There is a good chance that Laser will be relegated back to division 2, hopefully it will have a better score than Wasp had in division 2.

The time control in division 1 will be 60+10, slowing the pace a little more. There will also be 4 double RRs, twice as many games as in divisions 2 and 3. I hope to have time for more live blogs between reports. The openings in division 1 will be interesting. This season TCEC invited a fan to select the openings for 3 DRRs, while the first DRR will have no book at all. Cato can still be blamed, naturally.

A few interesting games
Laser - Arasan: Laser had an eval advantage after the opening, Arasan took over after 20 moves with a threat on the white king. After most pieces were exchanged Arasan's eval was over 1.5, the game reached a queen ending with Arasan a pawn up. Laser managed to hold, still in second place. The leading 3 engines drew all their matches in rounds 15-17, no changes at the top of the table.

Bobcat - Laser: Bobcat captured a pawn with its queen early in the game. The queen looked trapped and didn't move for most of the game, but instead of a poisoned pawn situation Bobcat's eval constantly increased. It had a pawn advantage on the queen side, and Laser had no counterplay and only defended. After 30 moves the white queen became active again in a QRN vs QRN position. For a while it seemed Laser found a drawing line, after exchanging queens and trading pawns for a knight the evals dropped below 1. However the white pawns were too strong and Bobcat won the game eventually. A big surprise and Laser's first loss in the division. Bobcat is fighting against relegation, Laser is now 3rd after Texel.

Bobcat - Fritz: Both engines thought they had an advantage in the middlegame. Fritz had a bishop pair while Bobcat had a knight pair. Fritz opened the position, trading a rook for a knight and a pawn. Despite Fritz's passer and Bobcat's exposed king, Bobact's rooks and queen took over the open files on the queen side. After exchanging pieces the game reached a RR vs RB position, won for Bobcat.

Texel - Laser: Texel had an eval advantage after the opening, its pieces with a lot of space. After several exchanges the position opened up and Laser traded its queen for RN. Evals were around 1.5 in a QB vs RBN position, and they increased over 2 at some point. However Texel could not break Laser's fortress and the game ended in a draw. Laser keeps its chances of promotion.

After 3RRs Bobcat is 1.5 points below Vajolet2 still with a small chance of avoiding relegation, Jonny is leading Texel by 2 points, Laser is 0.5 points behind.

Bobcat - Texel: Texel was a pawn up from the start but Bobcat had the eval advantage. Texel had passers on the queen side and Bobcat had a strong center and a king side attack. Texel gave material in an attempt to stop the attack, after several exchanges Bobcat was up a rook for pawns. The queen side passers were not strong enough and Bobcat converted the win. Bobcat is getting better results in the second half, trying to close the gap to Vajolet2. A setback for Texel in the promotion race.

Vajolet2 - Bobcat: Most pawns remained on the board with one open file in the center. The engines blocked the queen side and exchanged pieces through the open file, Vajolet2 had a small eval advantage but the game was heading to a draw. Then Bobcat blundered in the bishop ending and lost the game. This head to head loss against its main rival means that Bobcat has almost no chance to catch up with Vajolet2.

With 5 rounds remaining Bobcat is 2.5 points behind Vajolet2, Laser and Texel are equal.

Laser - Bobcat: After 20 moves the pawns became static and the engines slowly exchanged pieces on the queen side. On move 40 only RRN vs RRB remained and the engines were mostly shuffling with an occasional pawn move. Laser's eval started to increase when all rooks were exchanged, the knight was much stronger than the bishop and after capturing two pawns Laser was winning.

Arasan - Texel: For 30 moves the game was balanced with most pieces on the board. Then Texel trapped its own bishop and Arasan's eval started to climb. Texel was forced to give the bishop for pawns and the evals were above 1.5. Texel tried to counter with its king side pawns but could not avoid losing more material and the game. Texel drops to 3rd below Laser.

With 3 rounds left Bobcat is still 2.5 points behind Vajolet2, relegation for Bobcat is almost sure. At the top of the table Laser is second 1 point ahead of Texel. Laser still has to face Jonny with the black pieces, as well as a head to head match against Texel. This race is not finished yet.

Laser - Texel: see my live blog of this game. The game had a slow start, almost all pieces stayed on the board for a long time. Laser pushed pawns on the king side and had a space advantage. A series of exchanges opened the center and Laser was a pawn up with evals around 1 after move 40. After a second series of exchanges only RBN vs RBN were left and evals started to drop. The game ended in a tablebase draw. Texel needed a win, but it was Laser that was ahead for most of the game. The draw almost guarantees a second place finish for Laser.

Arasan - Wasp: Arasan did not play the opening well, this was the only game of 8 Philidor Defenses played where black came out ahead in eval after the opening. Wasp started to press on the king side, advancing pawns and opening a file. Evals kept increasing and reached over 3 when Arasan gave a queen for BN to avoid mate. This only delayed the inevitable loss. Wasp's first and only win in the division.