Stockfish won the season 16 superfinal The final score is 14-5 with 81 draws. It was clear that Stockfish was going to win, AllieStein managed to win a game in the last game pair and then blundered in the reverse.

We did not get a rematch of Stockfish and Leela after Leela finished third in the premier division and did not qualify for the superfinal. Leela was the only engine to have a positive score against Stockfish, I'm sure that the superfinal would have been more competitive with Leela instead of AllieStein, perhaps Leela would have won. Leela needs to improve its skiils in multi-engine competitions. Stockfish is consistently winning the premier division of the last few seasons, it appears to be a better all-around player than Leela.

Season 16 is over. It was another great season for me in terms of viewers, so thank you all !!  This last post took some time to complete, I was less in a hurry once the result of the match was obvious and I started my TCEC cup break a little early. My coverage of the season was interrupted just before the premier division and the season felt like a race to catch up since then. I'm glad it's finally over. I saw myself referenced in a chat command about the book sequences of the superfinals, and I feel obliged to repeat the analysis I ran about two years ago. I'm working on this now and will post the results soon.

TCEC is getting more coverage than a few years ago. Guy Haworth and Nelson Hernandez (Cato !) publish an article that summarizes each season - with a kind reference to this blog. Chess GM Matthew Sadler published reports of the superfinals in seasons 14 and 15. These articles can be found on the TCEC main site under the "TCEC Articles" tab. Kingscrusher has posted video reports of selected TCEC games for the last few seasons, mainly following the NN engines rise to the top. There is also a wiki page for TCEC with pages for individual seasons starting with season 14.

Games 91-92 started with a King's Gambit variation. In game 91 Stockfish kept connected pawns on the king side facing the white king. The black king was exposed and AllieStein used its bishops to threaten the king side along diagonals. A long series of exchanges resulted in an opposite color bishop ending, Stockfish refused to lower its eval and the engines continued to play until move 122. In game 92 the black king walked to the king side without castling. Stockfish opened a file in the center and the engines exchanged all the rooks. The game reached a queen ending, Stockfish chased the black king giving checks with its queen. The game ended in a tablebase draw.

Games 93-94 started with a 20-ply book sequence in the QGD opening exchange variation, where the engines castled in opposite directions. In game 93 the engines exchanged pieces and pawns in the center, then Stockfish gave a knight for two pawns and created connected passers on the queen side. Evals were negative from the start, Stockfish's evals increased over 2 while it moved its major pieces to support the passers and face the white king. 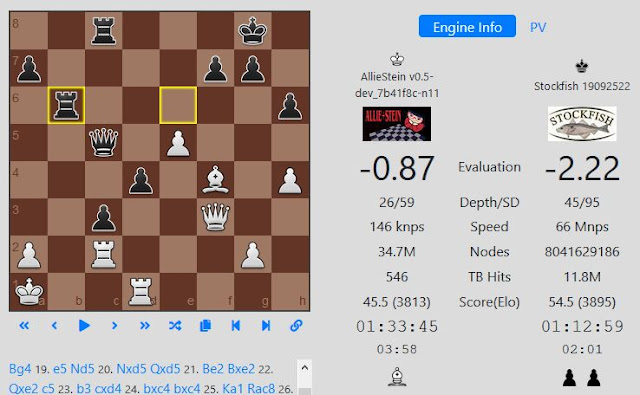 AllieStein was relatively calm with eval under 1. It blocked the passers while Stockfish increased the pressure on the open b file. AllieStein realized it was in danger but it was too late. 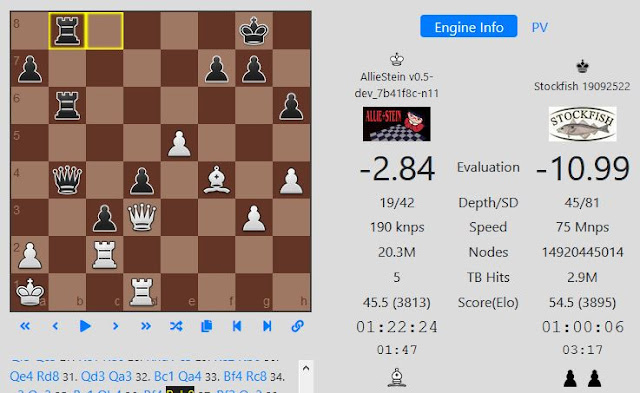 Stockfish moved a rook to the 2nd rank threatening mate. AlllieStein tried to counter with a weak attack on the black king without results. Stockfish had too many attacking options and the game was quickly adjudicated.

In game 94 Stockfish gave a pawn and opened the king side, its rooks threatened the black king. AllieStein played defensively, its eval slowly coming down. Stockfish traded RN for Q, the engines slowly exchanged pieces, AllieStein sacrificed a knight and the game reached a Q vs R ending. AllieStein was two pawns up, Stockfish's eval jumped but the black king could not be attacked by its queen. The engines shuffled and the game ended in a 50-move draw.

In game 95 Stockfish's eval was 0 almost the entire game. Both engines castled long, then they opened the king side. There were many early exchanges and only RNN vs RBN remained on move 27. The engines mainly shuffled with an occasional pawn move for a long time, AllieStein used all its time on one move as it does sometimes. After move 100 the engines started exchanging pawns and by move 119 the game reached a RN vs RB position. The game ended in a tablebase draw. In game 96 both engines kept their king in the center. There were no pawn exchanges after the start, after several pieces were exchanged the game reached a QRN vs QRN position on move 34.The engines shuffled for a while and then exchanged queens. It took 50 more moves, with both engines promoting a pawn to a queen, before AllieStein lowered its eval for the draw rule (the draw rule bug prevented the game from ending about 15 moves earlier).

In game 97 AllieStein kept its king in the center and pushed pawns on the king side. Stockfish pushed pawns on the queen side and its eval came down to 0. AllieStein used an open file on the queen side to move its queen to the 7th rank, Stockfish sacrificed a knight and forced a repetition draw by attacking the white queen. In game 98 AllieStein pushed pawns on the king side, leaving its king without pawn support in an open file. Stockfish castled long though there was an open file on the queen side as well. AllieStein gave a rook for a bishop and closed the king side file, evals turned negative. After a short shuffling period the engines exchanged queens, AllieStein's eval was over 4. Evals remained constant through another shuffle, then AllieStein captured a pawn and its eval jumped over 8. The shuffling continued and evals came slowly down, then the engines reduced to a RB vs BN position with black two pawns up. AllieStein continued to think it was winning, the game ended in a 50-move draw on move 229.

Games 99-100 started with a 23-ply book sequence in the Sicilian, Accelerated Dragon variation, where the engines castled in opposite directions. In game 99 AllieStein's eval was over 2 almost from the start. Stockfish gave a rook for a bishop and opened the queen side. The attack on the white king was weak, AllieStein used the open file to exchange queens and a pair of rooks. The game reached a RBN vs BBN position on move 30. 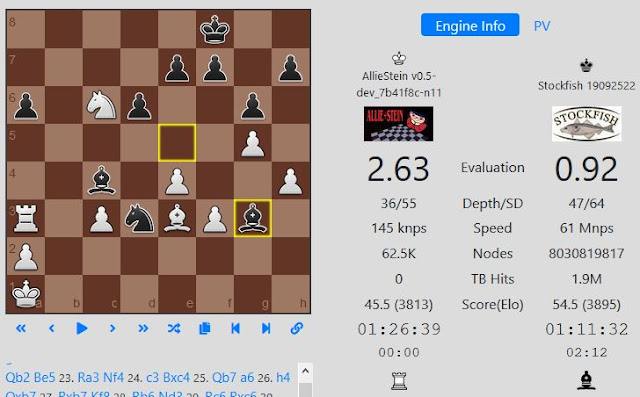 The engines exchanged pawns and more files opened, the white rook became stronger with more space to move. AllieStein's eval jumped over 4 and continued to increase, Stockfish's eval stayed below 2, perhaps it thought its bishop pair was strong enough. The engines mostly shuffled for a while, then AllieStein forced a trade of one of the black bishops. Stockfish chose to take a knight for it but its eval jumped to around 3. 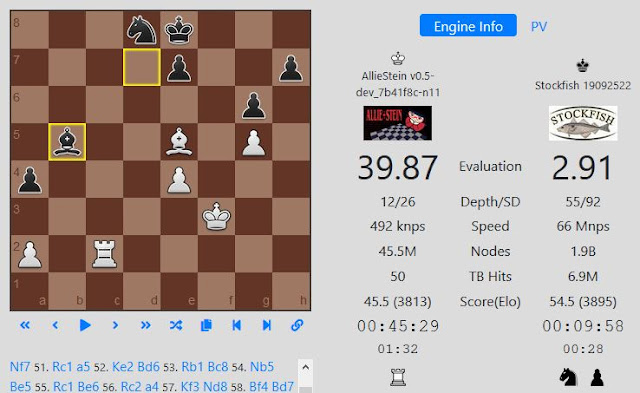 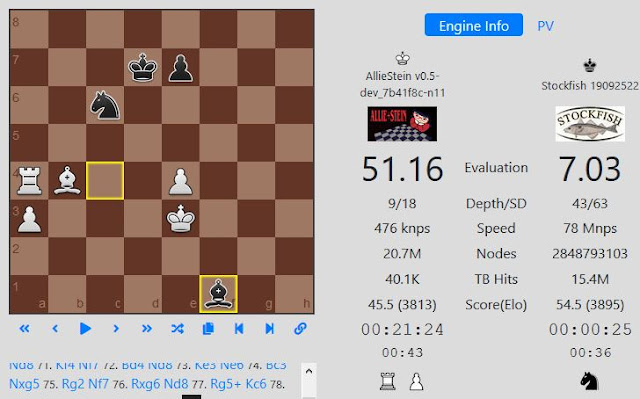 AllieStein was not in a hurry, it seemed it was not trying to win. Stockfish's eval increased when its king was blocked away from the queen side. AllieStein finally started to move its passer forward and the game was adjudicated.

In game 100 Stockfish gave two pawns and opened the king side, AllieStein gave a rook for a knight and weakened the white center. Evals were over 1 for a while, they came down after Stockfish's attack died down. The black king was still quite exposed but both engines thought it was safe enough. 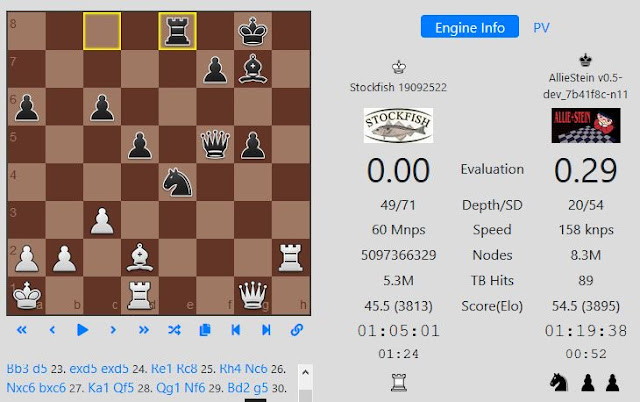 Evals stayed low for a while, not a lot happened until AllieStein decided to push pawns on the king side and then move its king up the board. AllieStein played a few moves from its PV without thinking, suddenly Stockfish's eval jumped over 2 and it started giving checks with the black king in the center. AllieStein pushed a pawn to the 3rd rank and thought that the threat of promotion was enough compensation. 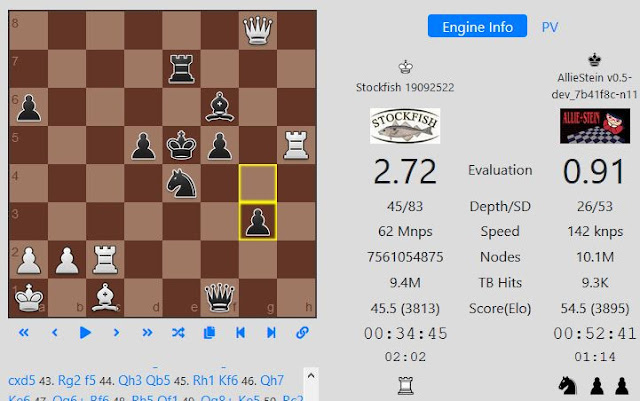 AllieStein soon realized its king was in a mating net. Stockfish captured the passer and then continued to give checks with the queen attacking from all directions. The game was adjudicated before Stockfish started to win material.