After 70 games Leela leads 10-7 with 53 draws. The draw streak is over after 21 straight draws. Leela wins a game pair and extends its lead to +3. It has a good chance of winning the match with only 30 games left.

Games 61-62 started with the black queen capturing a (poisoned?) pawn on b2. There were many exchanges after the start of game 61, the game reached a Q vs RB position on move 25. Stockfish was a pawn down, its eval over 1.5 while Leela's eval was low. For a while the engines shuffled and advanced their pawns, on moves 45 and 48 Stockfish's jumped twice and was over 2.5. 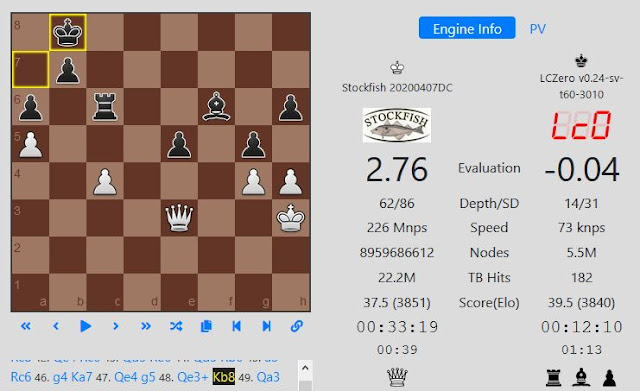 Stockfish managed to capture a pawn, other than that it could only give checks. Leela held its position and didn't blunder, Stockfish's eval came down after a long shuffle. The engines exchanged a few pawns and continued to shuffle, Stockfish saw another ghost for a while with evals over 1 and then its eval dropped again. The game was adjudicated on move 190.
In game 62 Stockfish's eval was 0 throughout the game. A few early exchanges opened the position but there were more pieces on the board than in the reverse game. The engines castled in opposite directions, Stockfish attacked on the king side and Leela countered on the queen side. Stockfish exposed the black king and Leela found a perpetual check on the other side, the game ended in a repetition on move 34.

Stockfish's eval was 0 throughout game 63, except for one move. Leela's eval was negative, it pushed pawns on the queen side, then gave a pawn and opened files. The engines exchanged pieces until only QRB vs QRB remained on move 33. Leela had a passer that Stockfish blocked, Stockfish slowly pushed a passer to the 7th rank. The engines traded passers, after some more shuffling Leela captured a pawn and equalized material. The position became stable and Leela's eval came down, the engines exchanged queens and the game was adjudicated. In game 64 Stockfish pushed pawns on the queen side and opened a file. Evals were close to 0, Leela countered on the king side while Stockfish captured two pawns and created passers. Leela gave a knight for pawns, the black king was in danger along the diagonal. When mate was near Stockfish ended the game in perpetual check.

Stockfish placed a knight on c6 early in game 65. Leela managed to get rid of the knight, but it let Stockfish capture a knight for pawns. Both evals were over 1, the white king was exposed and vulnerable. The engines reduced to a RBN vs RB position on move 32, Leela was 3 pawns up and Stockfish only had pawns on the king side. The engines traded the white knight and black bishop, Stockfish needed pawns to win in a RB vs R ending and it had only one left. Stockfish's eval jumped over 2.5 as it captured black pawns, Leela had 2 left that it needed to block the white pawn. The black pawns were accessible to the bishop and Stockfish was optimistic, but Leela kept the white king away and Stockfish couldn't capture a pawn. Stockfish's eval eventually dropped to 0 and the game was adjudicated.

In game 66 Stockfish traded a bishop for a knight early, leaving its king vulnerable on the dark squares. Leela placed its DS bishop on h6 like a thorn bishop, its eval over 1. 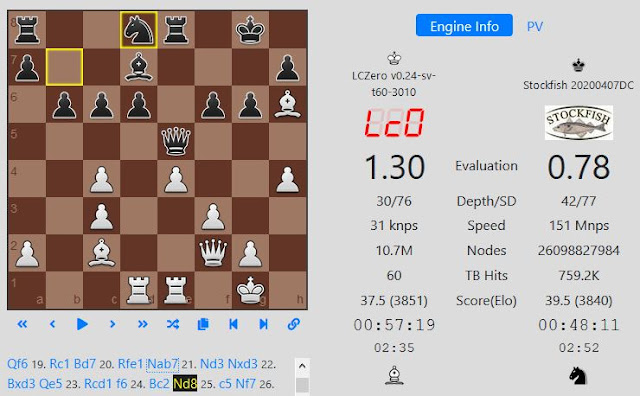 Leela gave two pawns and weakened the black pawn structure. Evals increased over 2 and in a series of exchanges the engines reduced to a RB vs R position. Stockfish was 4 pawns up but almost all its pawns were easy targets. Leela had only two pawns left. 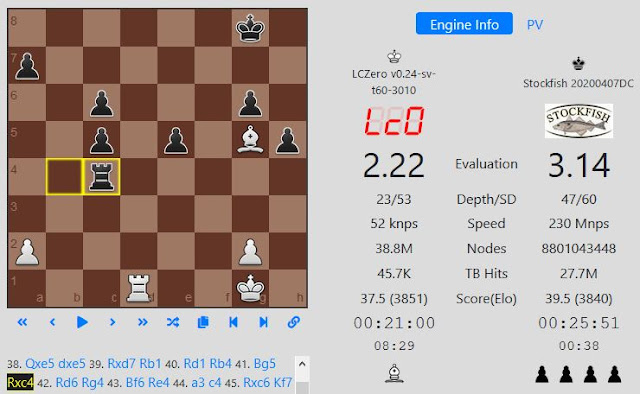 Stockfish captured the white a pawn, but couldn't get the g pawn guarded by the white king. Leela was slow but it managed to capture the black pawns one by one. The game reached a tablebase win on move 94. Leela wins the game pair and its lead increases to +3.

Games 67-68 started with black a knight up for a pawn in the Sicilian Paulsen variation. In game 67 the engines created a Q vs BNN imbalance right from the start. Leela thought it had the advantage, Stockfish's eval was 0. Stockfish avoided exchanging pieces, it pushed pawns across the board to create room for its major pieces. Stockfish had a pawn majority on the queen side, after exchanging a pair of rooks it created an advanced passer. Leela pushed a passer in the center, and in a sequence of moves that involved two white queens for a short while the game reached a Q vs RN position on move 54. Each engine had 3 pawns without passers, after a long shuffle the game ended in a 50 move draw. In game 68 Leela had a different plan, it captured another white pawn and created connected passers on the queen side. The engines reduced to a RR vs RRN position on move 27, Leela pushed its pawns all the way to a6 and b7, where Stockfish blocked them with its pieces. The engines then traded the two white passers and the black knight, exchanging a pair of rooks as well. The result was a rook ending with Stockfish a pawn up, 4 pawns against 3 on the king side. Evals were negative and the game continued on and on, but it was a draw all the way. On move 200 the game was finally adjudicated.

Games 69-70 started with black a pawn up. Leela pushed pawns on the queen side in game 69, Stockfish regained the pawn and Leela controlled an open file. The engines exchanged queens and only rooks and knights remained on move 29. The position became stable, the engines shuffled and pushed a few pawns for 30 moves. The game reached a RN vs RN position on move 66, the engines continued to trade pawns and the game ended in a tablebase draw. In game 70 Leela regained the pawn and the center opened. More pieces stayed on the board, Leela avoided exchanging queens. Evals came down to 0 and the game was adjudicated on move 37 with both engines repeating moves in their PV.