Games 1-2 started with a 1-ply book 1.d4 . In game 1 the engines diverged from popular lines after 5 moves, both kings stayed in the center and the engines opened a file on the king side and exchanged a pair of rooks. Leela later castled long, the game reached a QRB vs QRN position on move 28. Evals were close to 0, the game was adjudicated on move 73. Game 2 followed theory in the Semi-Slav defense for 10 moves. A series of exchanges cleared most of the board and only QBN vs QBB remaining on move 28. Leela was two pawns down but it threatened the black king. Stockfish finished the game with perpetual check on the other side.

In game 3 evals were over 1 from the start. Stockfish pushed pawns on the king side until they reached the black pawns, both engines castled short despite this. On move 26 Stockfish's eval jumped over 4 after it pushed another pawn forward to break the black pawn wall. 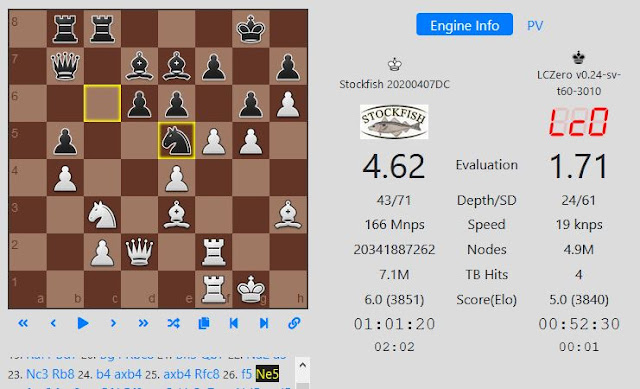 Stockfish opened the f file and then sacrificed a knight for a pawn. Leela's king was under threat from the white rooks and on the long diagonal. Leela gave back the material and a series of exchanges removed all pieces, leaving a king and pawns ending on move 40. 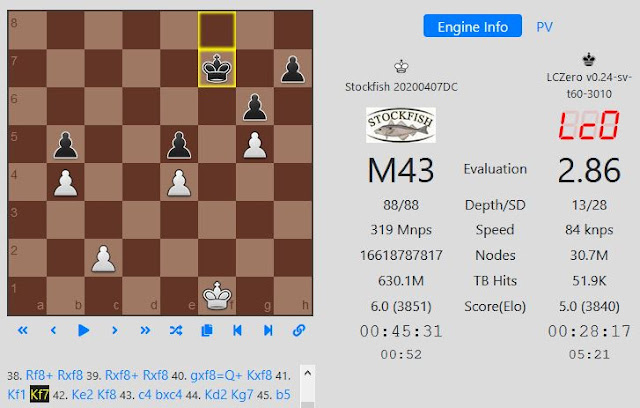 Stockfish used the c pawn to create a passer, Leela saw that it was losing and gave up. The game ended almost in mate after Stockfish promoted two pawns.

In game 4 Leela pushed pawns on the king side and developed its king side rook, then castled long. Stockfish kept its king in the center and exchanged pieces, giving a rook for a knight and pawn. Leela gave equalized the material, the game reached a RBB vs RBN position and Leela had a dangerous passer on the queen side. 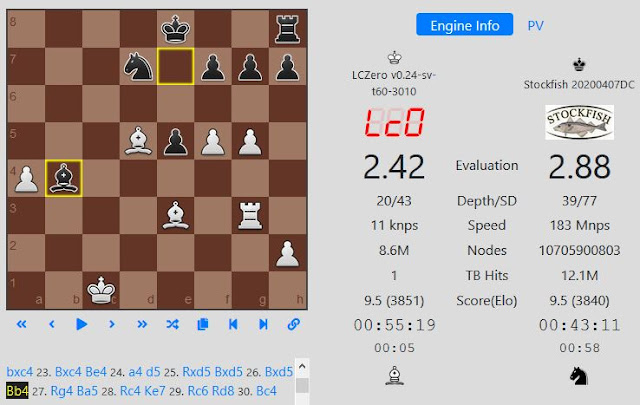 Stockfish focused on blocking the a pawn, it soon lost its central passer. Leela took a while to come up with a plan. It exchanged a bishop for a knight and captured a second pawn. 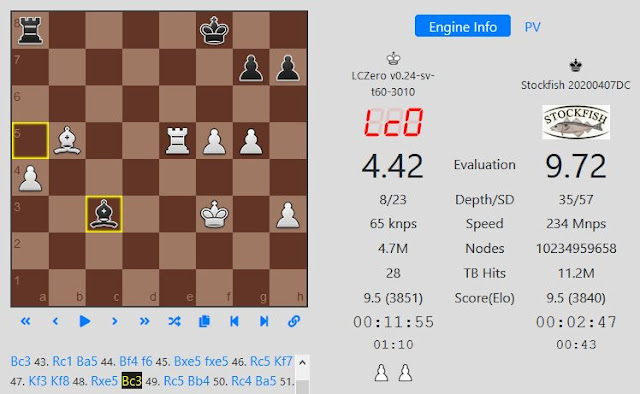 Stockfish knew it had no defense but Leela was in no hurry. After locking the black pawns Leela shuffled for 30 moves with the engines in blitz mode, before pushing f6 to create king side passers. Leela won material for a passer and the game ended in a tablebase position. Two white wins in this game pair.

Games 5-6 started with a 24-ply book, a popular line in the KID Orthodox variation. In game 5 the engines left the main line very quickly. They exchanged pawns and opened files on both sides, after a series of exchanges only QN vs QN remained on move 36. The game continued until there were no pawns left, a tablebase draw. In game 6 the engines followed popular lines for 7 more moves. Stockfish opened the position and its eval came down to 0. The game reached a R vs BN position on move 49, Leela continued to play and the game ended in a repetition draw on move 96.

Stockfish was up a rook early in game 7. Leela took its time getting some material back, it pushed pawns on the king side facing the white king. Eventually Leela got a knight and two pawns for the rook, its position looked stable though Stockfish's eval was close to 2. 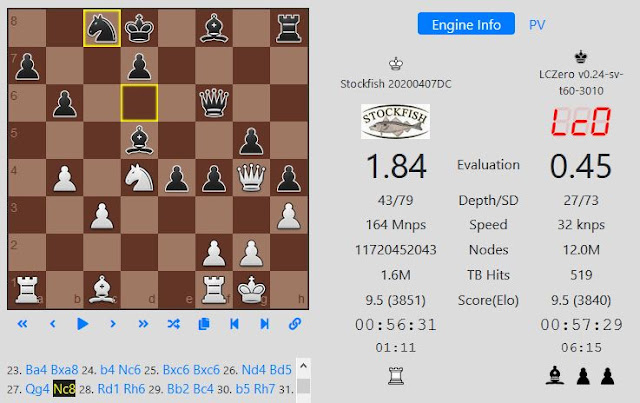 The engines gradually exchanged pieces, evals rising slowly. On move 48 the game reached a RR vs RB position, a few moves later Stockfish equalized the number of pawns to 3 each. 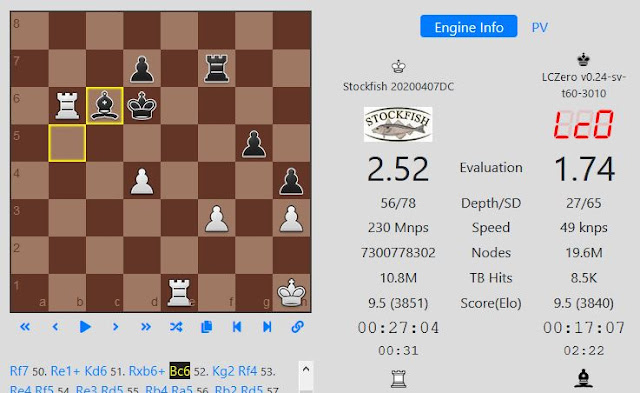 Progress was slow, after 20 moves Stockfish exchanged a pair of rooks and gave a pawn back. Its last pawn was a king side passer that Leela couldn't stop. The game ended in mate.

In game 8 Leela captured a rook and Stockfish took back the knight without delay. Evals stayed below 1, Stockfish pushed pawns on the king side and exchanged pieces. The white king became exposed and Stockfish gave checks with its queen. After exchanging queens the game ended in a tablebase draw. First decisive game pair, Stockfish in the lead.

There was one minor piece exchange after the opening in game 9, the engines played behind their pawn lines. On move 35 a pair of pawns was exchanged, the files remained closed and evals came down. The engines exchanged queens and all knights, then shuffled until a 50 move draw. The position was more open in game 10, Leela doubled rooks on the c file and Stockfish defended its backward pawn. The engines mostly shuffled for almost 60 moves, then opened the position in a series of exchanges. The game reached a RN vs RB position with evals close to 0, and ended in a tablebase draw.