After 40 games Leela leads 8-6 with 26 draws. Leela has a lead of 2 wins for the first time in the match. So far it seems that Leela converts advantages more easily than Stockfish, while Stockfish needs a Leela blunder to win.

Games 33-34 started with a 22-ply book in the King's Indian Defense, Fianchetto variation. In game 33 Stockfish gave a pawn early and pushed pawns on the king side. The engines exchanged minor pieces and evals came down. Stockfish's eval jumped on move 29, it opened the g file facing the black king and then added a rook on the 7th rank. Stockfish's eval suggested the game was over while Leela was competely calm. The white king was exposed and Leela had advancing pawns on the queen side, Leela was sure it could hold off the attack. 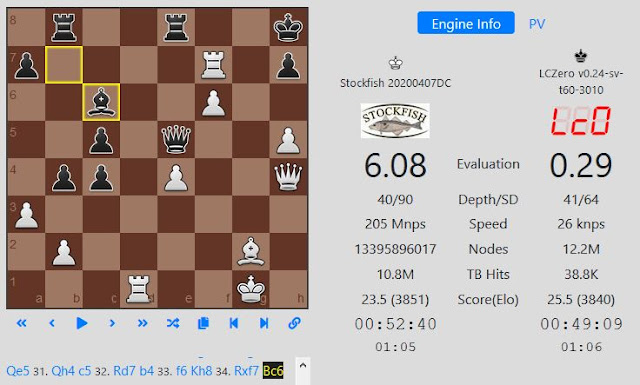 Stockfish took the f7 pawn and Leela started to feel pressure. Leela lost its bishop for the white f pawn, the engines exchanged a pair of rooks and the game reached a QRB vs QR position. Leela had a passer on the 2nd rank, but it didn't compensate for the material and the danger to the black king. 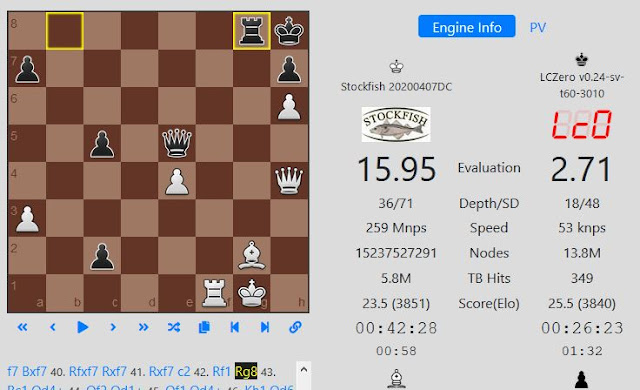 The black queen gave checks as much as it could, Stockfish found the opportunity to get rid of the black passer and to release its pinned bishop. Leela captured a few pawns but its king couldn't escape. Stockfish won material and the game ended just before mate. 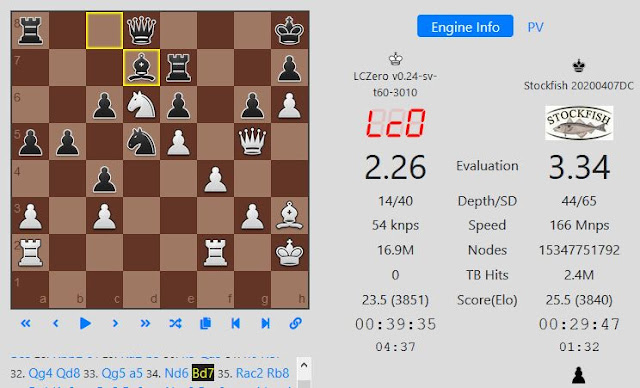 Stockfish was under pressure. It gave a rook to get rid of the white knight, then exchanged pieces until only RB vs BN remained on move 46. Leela went after the queeh side pawns and cleared them all. 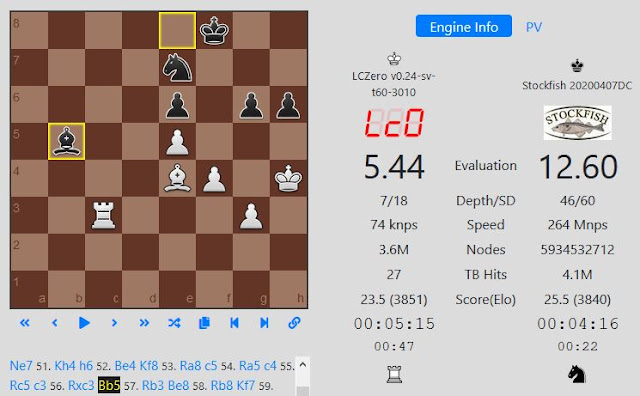 Stockfish saw it was losing but tried to form a fortress. As usual Leela took its time, it captured a pawn on move 73 and exchanged bishops on move 87. The game ended in a tablebase position. There were two white wins in this opening, the score is still tied.

Games 35-36 started with a 20-ply book in the Sicilian Dragon, Yugoslav attack. In game 35 Stockfish gave a pawn to open the h file, then gave a knight and pushed a pawn to h7. The king side attack gave Stockfish the material back and more, on move 26 it was up a rook for 3 pawns. Leela countered with a pair of connected passers on the king side, Stockfish gave some material back to get rid of them .The game reached a B vs N ending on move 39, Stockfish was a pawn up with all pawns on the queen side. Leela held the draw, though Stockfish continued to play until move 101.

Queens were off early in game 36 and the king side stayed closed. Stockfish pushed pawns on the queen side facing the white king, Leela exchanged a pair of rooks and its eval increased over 2, perhaps a better pawn structure? Stockfish's eval also increased, the engines reduced to a RBN vs RBB position on move 35. 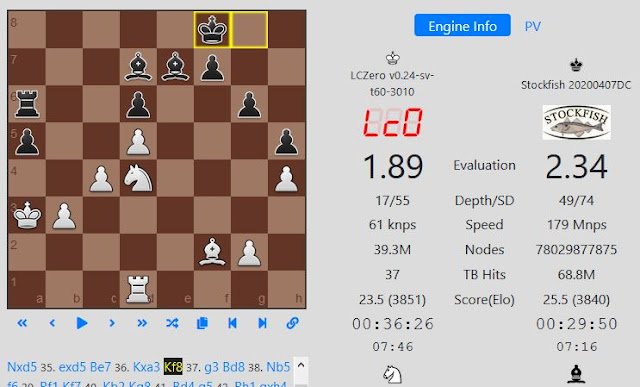 Stockfish had 3 weak pawns that had to be defended, its bishop pair was passive. Leela exchanged its knight for a bishop, and then captured the two black pawns on the queen side while losing one pawn on the king side. 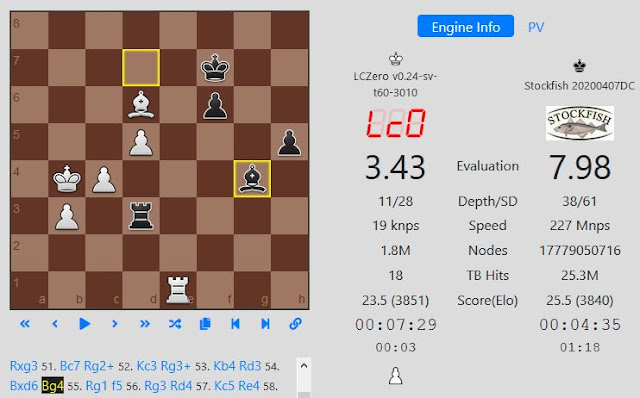 Leela pushed its pawns forward slowly and Stockfish couldn't stop them. Leela won the black rook for one of the passers and the game was adjudicated soon after that. Leela wins the game pair and goes into the lead.

Games 37-38 started with a 2-ply book 1.c4 Nc6, a weak black reply in the English opening. The engines left known theory in a few moves in game 37. Stockfish pushed pawns on the queen side, Leela opened a file and exchanged a pair of rooks. Evals came down as the engines shuffled with their pieces and advanced pawns on the king side. After a few exchanges Stockfish exposed the black king and ended the game in a series of checks.

Game 38 took a different path, but again left theory quickly. There were only a few exchanges in the opening, it seemed that Stockfish was trying to block the center. Evals increased over 2 as Leela exchanged pieces, opened the position and went a pawn up. The engines exchanged queens on move 25 and only RRB vs RRN remained. 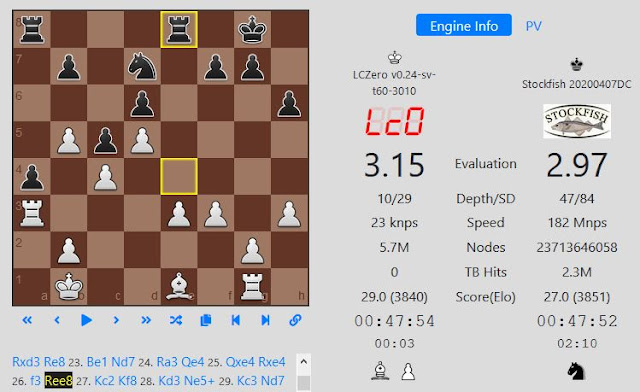 Both kings moved to help defend pawns, Leela doubled rooks on the e file and threatened to push its pawns forward. While Stockfish doubled its rooks there as well Leela shifted quickly to the queen side and captured the a pawn. 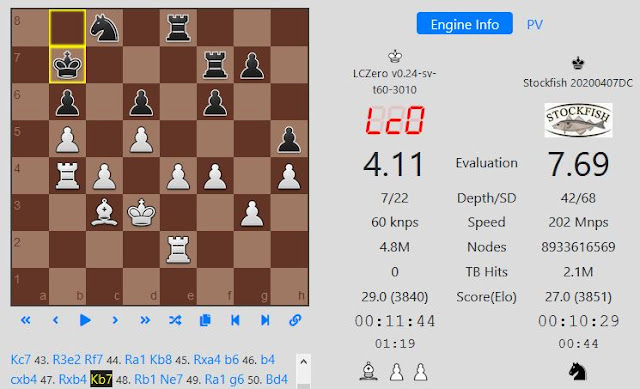 Unlike in other games Leela played with a purpose. It started to exchange pawns and open the position, then exchanged a pair of rooks and captured another pawn. Stockfish had no defense, the game was adjudicated in a won rook ending three pawns up. Leela wins a second game pair in a row and increases the lead to 2 wins for the first time in the match. .

In game 39 the center was blocked and Leela pushed pawns on the queen side. Leela gave one pawn and managed to push the other to a2. Stockfish managed to get rid of the passer, leaving only one white pawn on the queen side (an no black pawns). Evals were low and the engines started to shuffle, occasionaly exchanging pieces. On move 54 only QRB vs QRB were left, on move 70 the rooks were also gone. The game ended by Leela in a perpetual check on move 136. In game 40 Stockfish opened the queen side and its eval dropped to 0, where it stayed for the whole game. Leela gave a pawn and managed to place a thorn pawn on f6. After a series of exchanges the game reached a N vs B ending on move 34, Leela's eval was around 1.5. Stockfish had two weak pawns and two pieces to defend them, there was nothing Leela could do. After playing all the safe pawn moves it could Leela exchanged a pair of pawns on move 97. The game continued with a lot of shuffling and a few more pawn exchanges, and ended in a repetition on move 158.