After 80 games Houdini is in the lead, 13-7 and 60 draws. Houdini remains 6 games in front with only 20 games left. There were two more wins in black, one for each engine, and both in openings that started with an advantage for white.

In game 71 Houdini gave a knight for pawns, cleared the queen side from white pawns and supported an advanced passer. Komodo blocked the passer and exchanged pieces whenever it could. After exchanging queens only BN vs B were left and evals at 0, the extra piece enough to handle the passers and a draw. In game 72 there were almost no exchanges, Houdini's pawns advanced across the board gaining a lot of space. Houdini's eval was over 1 in a closed position and the engines started to shuffle. Komodo gave a rook for a bishop and created a wall, evals dropped to 0. After a few exchanges in the center only QRB vs QBN were left, Komodo had a fortress on the queen side for its king. Houdini's king was exposed and had to be defended by pieces. When all the king side pawns were gone there was a dynamic stand off that was played for another 60 moves until the engines agreed to a draw.

In game 73 the engines formed a long diagonal pawn line that blocked the center and the king side and almost divided the board into two separate halves. There was a small opening on the queen side for pieces to pass through. Houdini's bishop was completely blocked out, the only target for Komodo was the black b pawn. 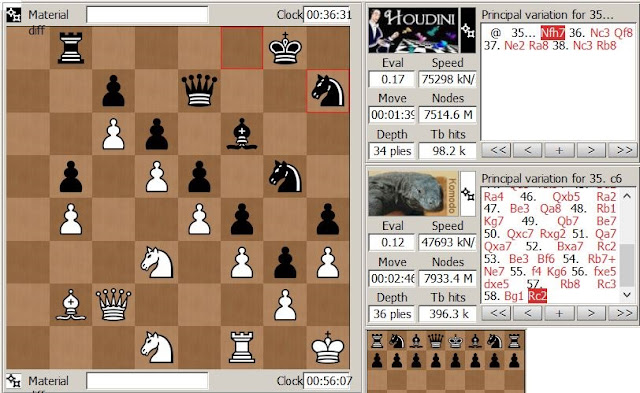 Suddenly Komodo saw a plan and the evals jumped above 1. Houdini did not have enough defenders available and Komodo could take b5 easily. However, it took its time mainly to block any infiltration attempt and to keep an eye on the king side, a knight sacrifice could lead to a dangerous king side attack. Once the pawn was taken the black QR could move more freely and Komodo was very careful and took its time. Eventually it arranged all its pieces just right and pushed the b pawn. 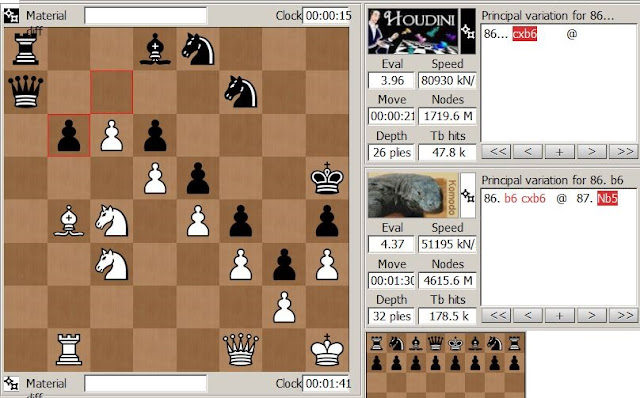 With the pawn wall breached Komodo created a connected pair of passers and exchanged queens. The game was soon adjudicated, the PV showed that Houdini was losing material to stop the passers. A deep plan and patience won the game for Komodo.

Komodo closed down the queen side in game 74, then its queen wandered through the white territory until it was exchanged. The remaining pieces could only shuffle, and a few exchanges later the game was adjudicated in a RNN vs RNN position.

Game 75 started with an eval advantage for Komodo, its queen out taking pawns on the queen side. Houdini took a rook for a bishop to compensate. After closing the center Houdini could only defend, but Komodo could not push its queen side pawns and the engines started to shuffle. After 3 rounds of resetting the 50-move counter at the last minute the engines finally allowed a draw, the longest game of the match so far.

Game 76 started in a much more relaxed manner. Material was balanced and there were almost no exchanges, Houdini kept an eval advantage and had more space. The queen side looked stable and Houdini's pawns on the king side were advanced, its king slightly exposed. 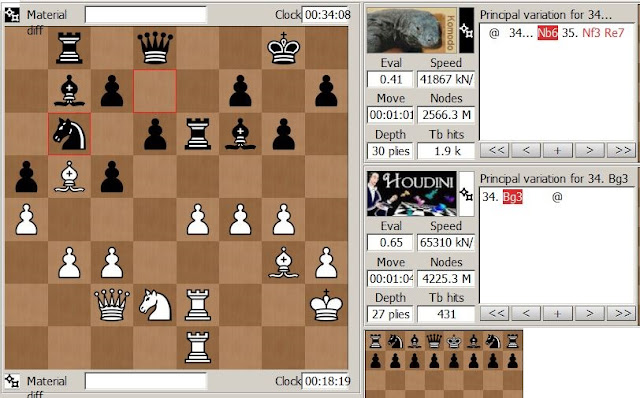 Evals started to increase as Houdini's pawns advanced on the king side. Komodo blocked them without opening files, but it gave a rook for a knight in the process. In a QRR vs QRB position Houdini's king could not be attacked as long as white controlled the back ranks, while Komodo's king was vulnerable in the corner if white could penetrate. 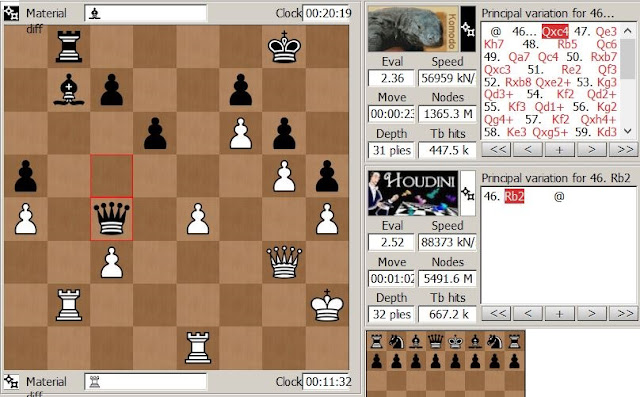 Komodo tried to avoid exchanging queens, Houdini managed to force it for two pawns. With a pair of rooks also gone the remaining R vs B position was a win for Houdini, too many pawns were hanging and the black king could not get out of its corner.

There were very few exchanges after the start of game 77. The evals started in favor of Komodo but turned negative. Komodo pushed a passer through the center, Houdini advanced pawns on the king side. 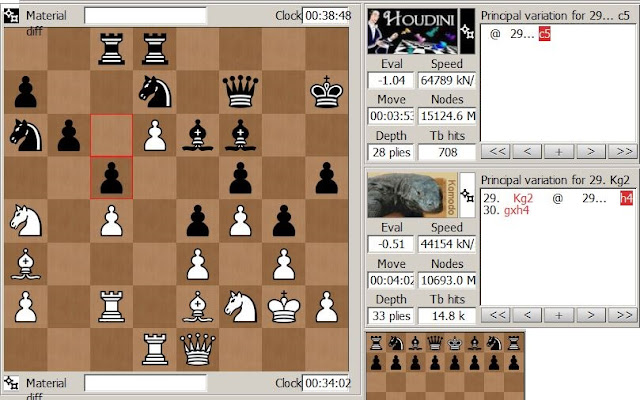 Through an exchange Houdini created a passer on the queen side, and it also went a pawn up after capturing Komodo's unsupported passer. Evals continued to climb, approaching 1.5 for Houdini. 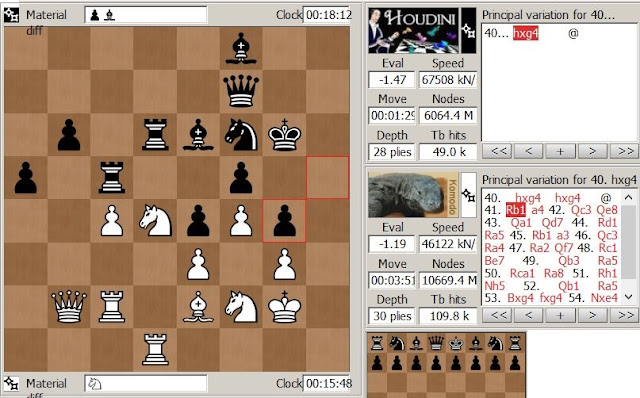 After a series of exchanges Houdini's a passer was unstoppable. Komodo chose not to stop it, instead it continued to exchange and capture pieces. The result was an unusual QQ vs QB position with Komodo 2 pawns up. 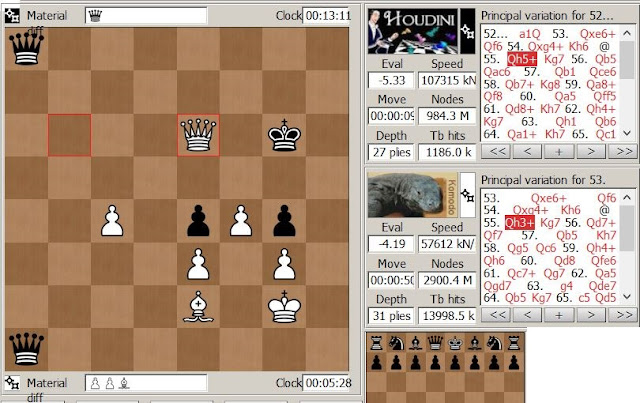 Komodo captured another pawn but its position was hopeless against two queens. This was Houdini's first win in black in the match.

In game 78 the center was closed and evals close to 0. The engines opened a file on the king side and through it exchanged pieces until only QB vs QN remained. Komodo gave the knight to stop a passer and forced a perpetual check draw.

Komodo had a small eval advantage in game 79. The center was blocked and action focused around the open file on the king side. The engines exchanged most pieces and reached a knight ending, Houdini blocked any chance Komodo had to gain a pawn. Komodo continued to try for another 35 moves before adjudication.

Game 80 started with a small eval advantage for Houdini. The center was blocked after the start but then Komodo unblocked it, compromising its king safety and losing one of its bishops in the process. The evals started to go negative, still close to 0. 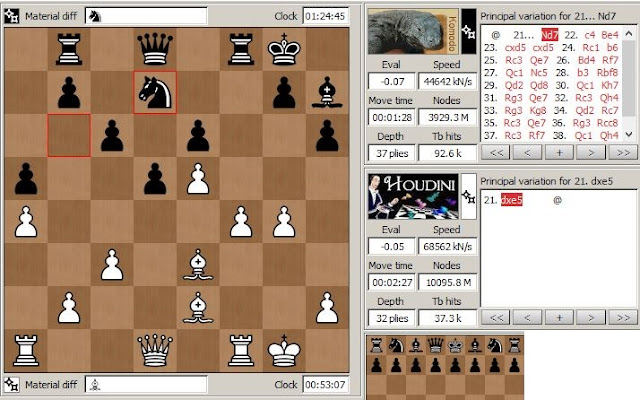 Komodo now had a pawn majority on the queen side. Houdini was reluctant to open files on the queen side and tried not to exchange pawns there. As a result Komodo was able to advance its pawns until two became connected passers. Evals jumped over 1. 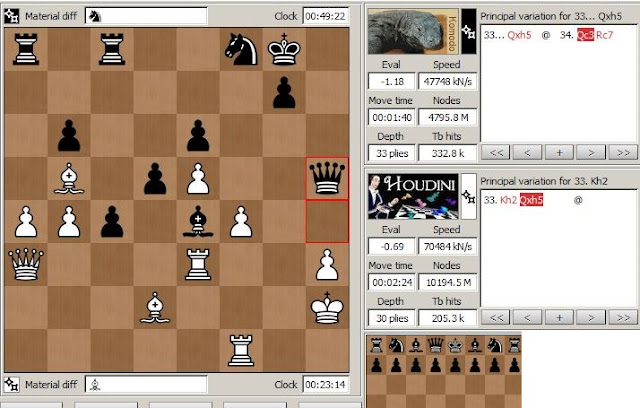 Houdini had to deal with the threat of both the passers and the strong central bishop. There was a series of many captures and exchanges, including a queen sacrifice and a pawn queening by Komodo. After (all) queens were exchanged only RB vs RR remained, evals approaching 2. 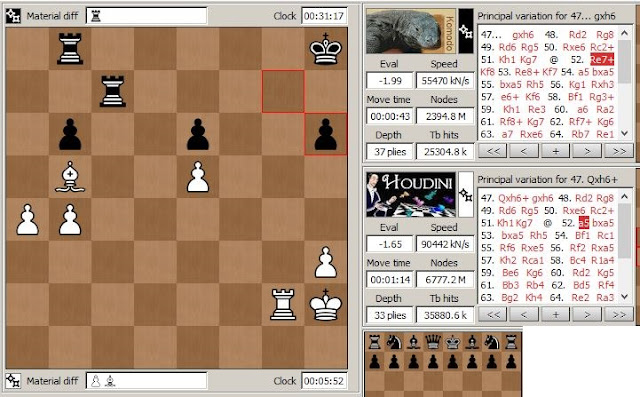 The endgame was not easy, Komodo trapped the white king and Houdini had to protect against mate threats. Eventually the game was adjudicated a win for Komodo, in the PV it forced a rook exchange and the remaining bishop could not defend the white pawn on the king side. A second win in black for Komodo.