Komodo had a small eval advantage in game 61 but no real advantage on the board. After closing the queen side Houdini attacked on the king side, advancing pawns supported by many pieces. Komodo cleared the queen side and countered, leading to a series of exchanges that left a drawn knight ending.

In game 62 Komodo exchanged many minor pieces after the start, Houdini's pawn structure had holes on both sides and its king was exposed. After exchanging queens the kings were not in danger and Houdini's more advanced pawns became an advantage. Houdini's eval was starting to increase. 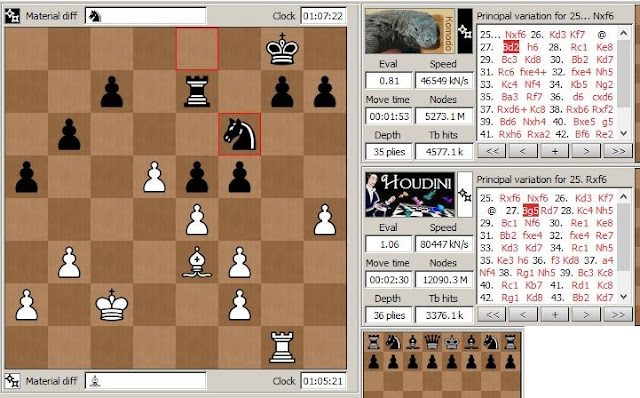 Houdini exchanged the bishop for the knight and evals were jumping. The white king was very active, it marched forward and attacked the queen side pawns. Komodo tried to counter with its pawns on the king side, but it wasn't enough. 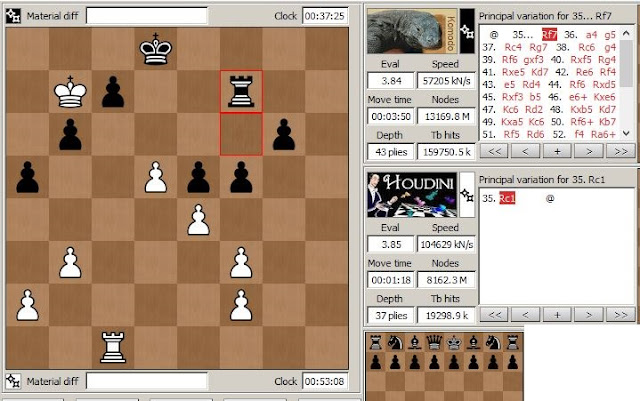 Houdini's rook found its way behind the black pawns, and the game was declared a win for white. Komodo's PV suggested that Houdini would be two pawns up soon in a winning endgame.

Komodo's queen came out early in game 63, and the queens were exchanged before too long. Evals were low though Komodo was two pawns up with an advanced passer in the center. Houdini created passers on the queen side and exchanged down to a RN vs RB position and forced a draw. In game 64 Komodo's queen came out early again, this time as black. Houdini's eval stayed above 0.5, it was a pawn up and it had more space on the queen side. In a long series of exchanges the evals jumped above 1 and only RRN vs RBB remained. Komodo found a defense, first exchanging a pair of rooks and removing the white queen side pawn, then exchanging a bishop for a knight. The R vs B ending was a 7-man draw that was played for another 25 moves.

Komodo gave a knight for pawns at the start of game 65. Evals were at 0.8 after queens were exchanged, Komodo took over the center and with a series of exchanges removed all the black queen side pawns. 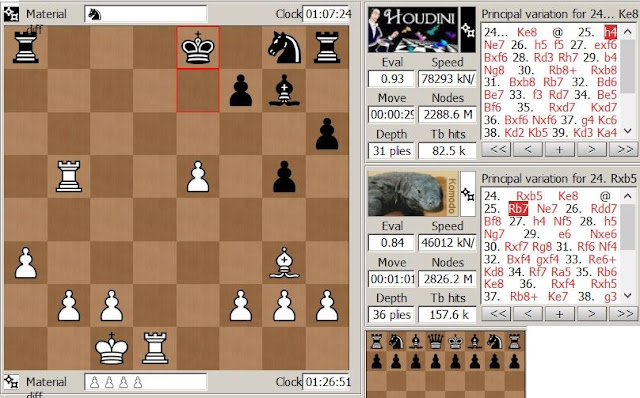 The white rooks took over the 7th rank and the queen side pawns began to march. Houdini tried to counter with its pawns on the king side, and by exchanging a pair of rooks. The evals continued to increase over 2. 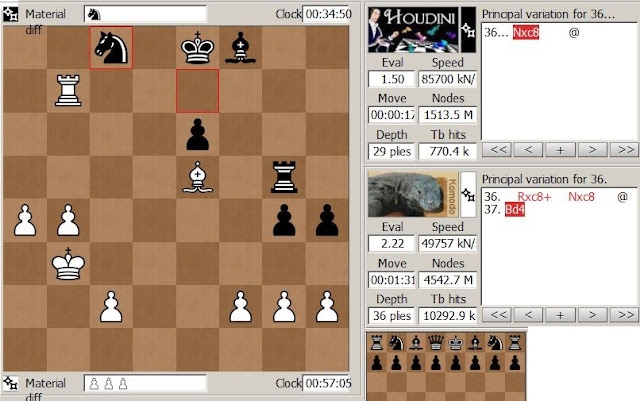 Eventually Houdini was forced to give the knight to stop the a pawn. In the RB vs RB ending Komodo was two pawns up. The game was stopped before the win was clear, the PV showed that after exchanging bishops the rook ending was won for white.

In game 66 there were very few exchanges at the start. Houdini had a space advantage and evals that got up to 0.8, the position remained mostly closed and the engines started to shuffle. After more than 60 moves and exchanging all rooks evals dropped to 0, Houdini marched a passer forward and Komodo responded with a perpetual check draw.

There were many exchanges at the start of game 67. The engines castled in opposite directions and Komodo advanced pawns on the king side facing the black king. Evals increased to about 1 as the king side started to open up with all the white major pieces attacking. Houdini exchanged a pair of rooks and took over the center, in the QRN vs QRB position Komodo's attack was over. The engines shuflled for a while and closed the game with exchanges and a drawn rook ending.
In game 68 again the engines castled in opposite directions. Both engines advanced pawns towards their opponents' king, Houdini also lined up its major pieces on the g file, looking very dangerous for black. 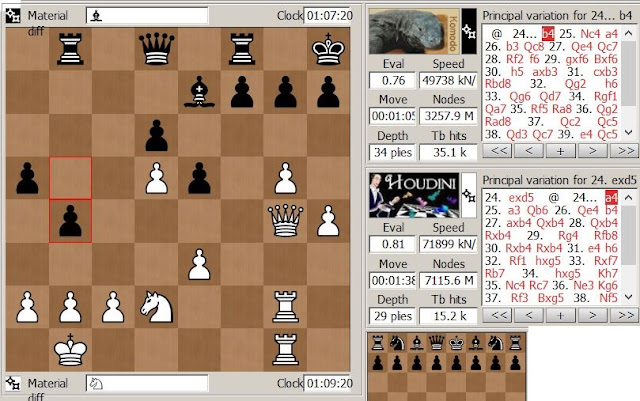 Instead of opening files the pawns on both sides locked to create long diagonal lines. Houdini's evals remained constant for a long time, while Komodo's slowly increased. The engines shuffled and it was not clear how Houdini could improve its position. Then Komodo chose to exchange a rook for the white knight. 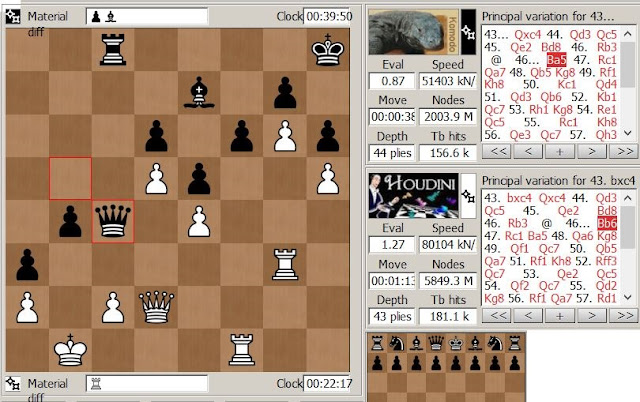 Komodo perhaps thought the knight can be strong in these closed positions.The exchange allowed Houdini to move its pieces to the queen side and open it up with a pawn push. Evals started to jump as most of the queen side pawns were removed and the rooks took over the open files. 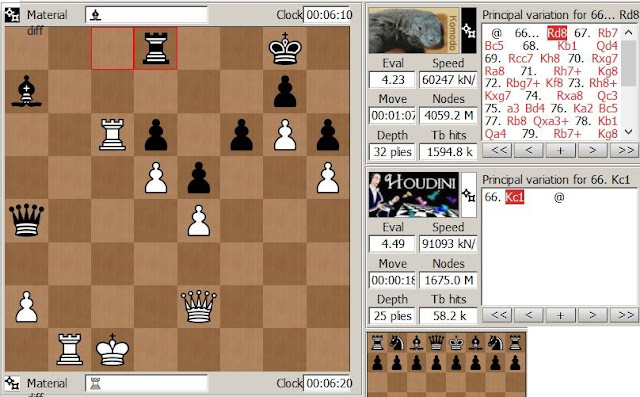 Houdini's king was exposed but Komodo was too busy defending with the white rooks on the 7th rank. The threat of mate forced Komodo to lose material and the game was soon over.

In game 69 Houdini sacrificed a knight for pawns and got the initiative with very active pieces. Komodo had an eval advantage of up to 0.6, it exchanged pieces to stop Houdini's attack. After queens were gone only RN vs R remained, Houdini's pawns were strong enough to compensate for the knight, and the engines agreed to a draw. In game 70 the queens were exchanged early. Only RN vs RN remained by move 27 and evals were close to 0. The game ended in a drawn R vs R position.