After 30 games Houdini leads 5-0 with 25 draws.
Houdini continues to dominate the superfinal, Komodo has not been close to winning a game yet. There is still a long way to go but the trend is getting clear and it is hard to view this as statistical noise.

Game 21 was balanced with a very small advantage for black. The evals stayed close to 0 throughout the game. All the minor pieces were off the board by move 38 and the game ended in a repetition. In game 22 Houdini equalized immediately and most of the game the engines had positive evals that got as high as 0.5. The queen side was open, for a long time the engines shuffled without making contact. Then the exchanges started and soon the game reached a rook ending and another draw.

Houdini willingly walked into a trap in game 23, giving a rook for a bishop and pawns. Evals were low, and Houdini used an attack on the white king to exchange most of the pieces. In the end only a white knight remained, black's two extra pawns secured a draw.
There were almost no exchanges in the opening of game 24. Houdini's eval fluctuated within the 0.4-0.8 range, Komodo was more conservative. On move 26 Komodo chose to exchange pieces, winning a rook for a knight while exposing its king to attacks. 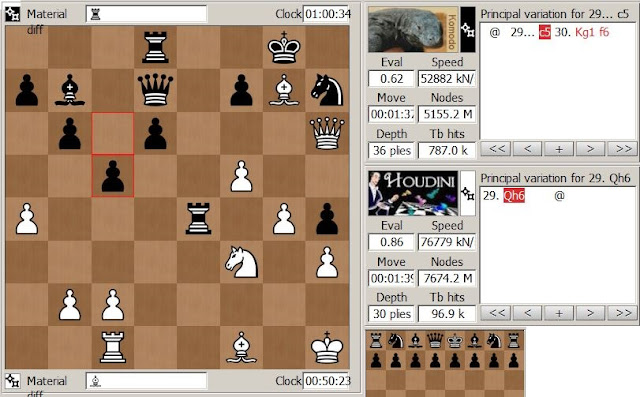 Komodo defended its king at the price of losing all the king side pawns. Houdini's pawns looked intimidating as they started marching forward. The evals continued to increase above 1.5. 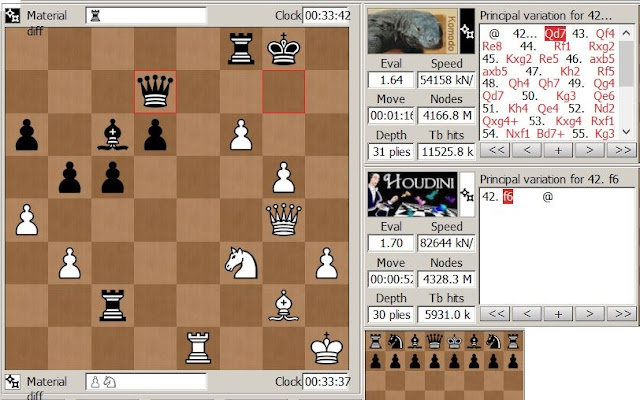 Komodo had to give a rook to stop the white king side pawns, and the RBN vs RB ending was easy for Houdini to convert. The remaining black pawns were on dark squares where the bishop couldn't assist, and they were soon gone. A knight and two pawns up was enough for a win.

In game 25 there were only a few pawn exchanges in the first 25 moves. Evals stayed low as the engines started to exchange pieces. The game reached an opposite color bishops ending and a draw. In game 26 the queens were exchanged early and the engines closed the center. The engines exchanged pieces through the open flanks, and only RBB vs RBN were left on move 31. The rest of the game was mostly shuffling until the draw 60 moves later.

Queens were exchanged early in game 27, there were many pieces exchanged and many open files. By move 29 only RNN vs RBN remained, the game ended in a draw after most pawns were taken. In game 28 Houdini as white kept the game alive longer with evals of about 0.5. However, after a few exchanges the evals came down, the advantage was not realized on the board. The game reached a king and pawns ending and another draw, despite black queening a pawn.

In game 29 the center was blocked with pawns, Komodo had a small eval advantage though its king remained uncastled. Houdini started a series of exchanges that led to a QN vs RRN position, and then used irs rooks to force a perpetual check draw. In game 30 there was more action along the queen side. Komodo's eval were at 0 right after the start, Houdini agreed not long after. The engines exchanged all the queen side pawns and most pieces. The game ended in a perpetual check in a QN vs QN position.