The season 10 superfinal has started, a 100 game match between Houdini and Komodo. Stockfish did not qualify for this season's superfinal, its fans disappointed. The chat is much quieter, this is probably related - Stockfish fans can be unpleasant when it is not winning. The time control for the superfinal is 120+15, so the games are 4+ hours long.

After 10 games Houdini is in the lead, 2-0 with 8 draws. Komodo has had one game with a significant chance of winning so far, but couldn't convert to a win. Still too early to draw conclusions.

In the first two games there was no book, the engines had freedom to play as they liked. Game 1 was a Bogo-Indian opening. The king side was closed and the action was focused on the queen side and the open c file. After exchanging a pair of rooks on move 28 the evals became close to 0, the engines started to shuffle. A few more exchanges led to a QN vs QB position. Houdini's queen side pawns looked dangerous but Komodo forced a perpetual check draw.
Game 2 was a French opening. Komodo as black was two pawns up on move 15, with Houdini's queen side free of pawns. Komodo's king remained uncastled though it later marched to the queen side. Evals were in black's favor due to the material advantage, while Houdini applied a lot of pressure on the black king and Komodo had to defend. The engines started to shuffle from move 30, with a few pawn moves that reset the draw counter. It took a very long time for Komodo to give up its pawn and eval advantage, draw was reached only on move 185.

In game 3 Komodo had a small eval advantage, Houdini's king stayed uncastled and its pieces had less room to move. Komodo castled long and Houdini pushed its queen side pawns and applied pressure with its major pieces. Komodo gave a pawn to open the king side but didn't get any meaningful attack. Houdini equalized and the game ended in an early repetition draw.
In game 4 Komodo castled its king and did not push pawns on the queen side. Houdini pushed its king side pawns and the evals increased to over 1. The engines exchanged minor pieces until only the majors were left on move 30. 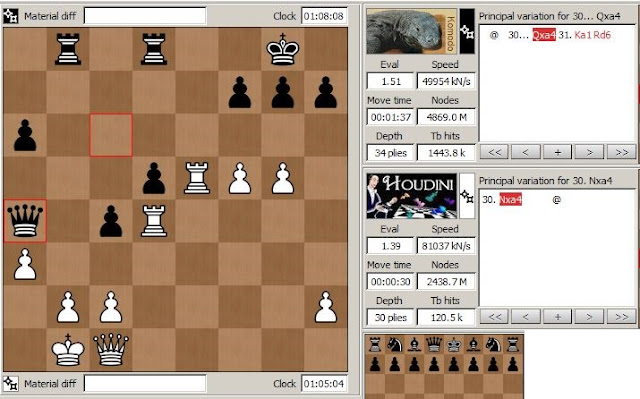 Komodo's pawns on the queen side were weak and easy targets, Houdini's pieces were very active and made multiple threats. After exchanging queens Komodo couldn't hold on to all the pawns and Houdini was able to capture one. 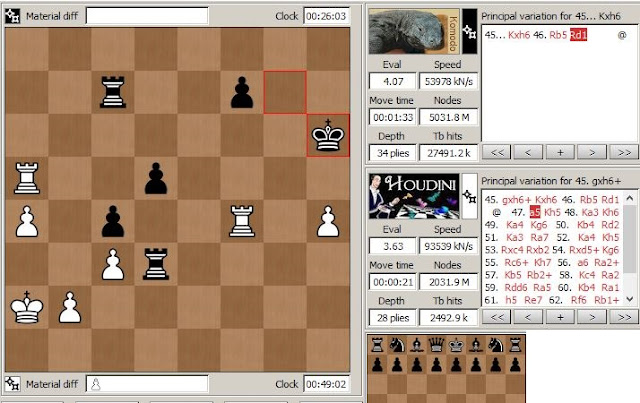 Houdini now had a passer, and with Komodo busy stopping it Houdini soon captured more pawns, and the game was over. First win of the superfinal goes to Houdini.

The position was balanced after the opening in game 5, evals close to 0. Houdini had better pawns on the queen side, Komodo concentrated its pieces there to stop them. Both engines had passers, all were gone together with most pieces and the game reached a drawn rook ending.
In game 6 Houdini was much more aggressive from the start as white. It attacked the king side with pawns and pieces, exposing its own king in the process. The evals fluctuated for a while, eventually they reached 1 and stayed there. 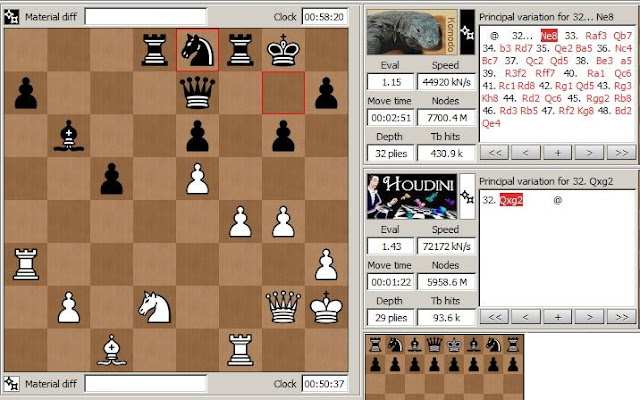 Houdini's advantage was not clear on the board. It seemed the engines did not have a plan as they shuffled for a while, yet the evals kept increasing. After exchanging queens Houdini won a pawn on the queen side with evals over 2.7. 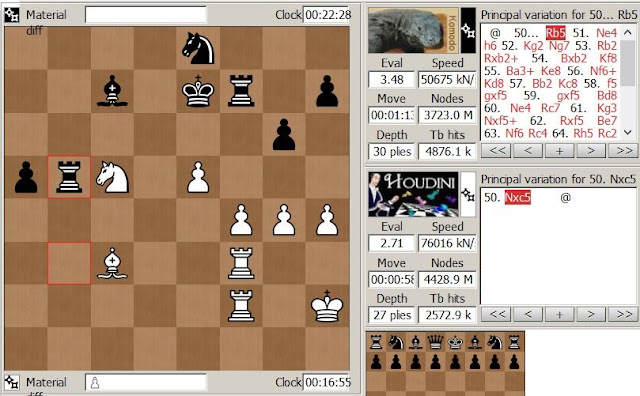 It was only a matter of time until Komodo's remaining queen side pawn was gone. With a passer and two pawns up Houdini's win was guaranteed. Two wins in a row in white for Houdini.


Game 7 started in a closed position and a small eval advantage for Komodo. By move 24 all the queen side pawns were gone and the engines were mostly shuffling. Most pieces were exchanged after a while and evals came down to 0, nothing exciting happened until a draw was agreed. In game 8 the pawn structure was slightly different, the a and b files were clear and the center was blocked by pawns. It took longer for the engines to exchange pieces, Komodo's knights were active on the king side for a while. However this game also had a shuffling phase and it ended in a QN vs QN draw.

Komodo started with an eval advantage in game 9, which increased to over 1 despite being a pawn down. On move 24 Komodo surprised Houdini and started a series of exchanges that left only Q vs RB on the board. Komodo evaluated the imbalance at almost 2, but it turned out that Houdini had an unbreakable fortress. The white king was trapped in the corner and the queen could not win on its own. Still, the first game where Komodo made a significant attempt to win a game. In game 10 Houdini did not get any advantage at all, Komodo equalized very early and evals were close to 0 by move 23. The game was adjudicated in a drawn rook ending.