The season 15 TCEC cup is over, Leela is the winner, keeping its title from last season. In the semifinals Leela beat Houdini with two wins in 7 games, and Stockfish beat KomodoMCTS with the same score. It is interesting to note that KomodoMCTS beat its elder brother Komodo in the quarter-final by a single win in the last game of eight played. In the final Leela won the third game and Stockfish won the 8th game to even the score. Then Leela won the next game and held the draw in the reverse, winning the first tiebreak minimatch and the cup.

In the premier division Stockfish was in front, it had a better score than Leela against the lower ranked engines. However in their head to head games Leela managed to beat Stockfish once out of 6 games. Recall that last season in the superfinal Stockfish won but by the smallest of margins. It is very hard to predict the result of this superfinal and I hope we have another close and competitive match.

After 10 games Leela leads 1-0 with 9 draws. The first 9 games were drawn, including one pair of King's Gambit games where Stockfish is considered to have an advantage.

Stockfish started game 1 with an eval close to 1. The center was blocked, the engines castled in opposite directions but the position remained closed with only one pair of pawns exchanged. Leela's eval became negative, the queen side was blocked and the engines shuffled from move 23. On move 49 Leela gave a rook for a bishop and created a king side passer, its eval jumping over 1. It pushed the king side pawns a little and after a few more piece exchanges its eval peaked over 2.5. However, Leela could only continue shufflling, in the end Stockfish gave back the material and found a perpetual check draw. In the reverse game Leela's eval was over 1, the engines exchanged pieces and the position was more open. Stockfish's eval dropped to 0 as Leela captured pawns. After exchanging all rooks Stockfish was down 3 pawns, its counterattack on the white king was strong enough to win a bishop. Leela captured all the black pawns and Stockfish forced a perpetuak check draw.

Games 3-4 started with a 30-ply book sequence in the Sicilian Scheveningen variation. In game 3 Stockfish started with a small eval advantage that fell to 0 after the engines opened the queen side. Stockfish had a queen side passer, the engines exchanged pieces until reaching an opposite color bishop ending and a draw. In game 4 Leela's eval went over 1 after it created a passer on the king side. Stockfish hid its king behind the passer and was relatively safe. The engines exchanged pieces and shuffled for a while, evals came down after Stockfish opened the center. The exposed white king gave Stockfish enough compensation, the game was adjudicated a draw in a QRN vs QRB position.

Queens were off early in game 5, Stockfish was a pawn up. The game reached a RRB vs RRB position on move 28 and the engines shuffled until adjudication close to the 50-move rule. In game 6 Leela had an eval around 1 from the start. Stockfish kept its king in the center, Leela attacked on the queen side and forced the black king to move. The game reached a R for BN imbalance on move 24, Leela attacked the exposed black king with its queen and rook. Stockfish's eval remained at 0 despite what appeared to be a scary situation. On move 40 the engines traded Q for RB and the game reached a RRB vs QBN position, Leela's eval dropped. The rest of the game was mostly shuffling, Leela managed to capture all the black pawns but not more. In the end Stockfish found a way to force stalemate on move 144.

Games 7-8 were a KGA variant. In game 7 queens were off early and Stockfish's eval was 0. There were many early exchanges, on move 32 Stockfish gave a rook for a knight and only RBN vs RRN were left, Stockfish two pawns up. Then Stockfish gave a knight for a pawn, Leela was down to one pawn and Stockfish had 4 passers on the queen side. The white passers compensated for Leela's material advantage, Leela captured two passers but could only stop the other two. After a long shuffle the engines exchanged down to a tablebase draw. In game 8 Stockfish had 2 connected passers facing the white king on move 11. Both evals were negative over 1 when the engines played out a PV agreement that started with Leela giving a rook and pawns for a bishop. Stockfish's eval dropped despite the material advantage, Leela gave another rook for a knight and attacked the black king. Stockfish gave up its passers and an exchange to get out of trouble. Leela's eval dropped and Stockfish ended the game with perpetual checks.

In game 9 the network crashed on move 20 and the game was later resumed. Stockfish had an eval advantage of around 1 from the start. Stockfish won a pawn with doubled rooks on the f file, Leela forced a queen exchange. The queen side was blocked, Leela used the open file to exchange all rooks and the game reached a same color bishop ending on move 34. Evals dropped to 0 and the game was adjudicated.

Leela had an eval over 1.5 after the opening in game 10. It opened the a file and pushed a rook to a7, Stockfish countered by pushing pawns on the queen side and creating an advanced passer. Leela won a piece, Stockfish's eval was around 1 as it thought the passer was worth the material. Then Leela offered a rook exchange on move 24: 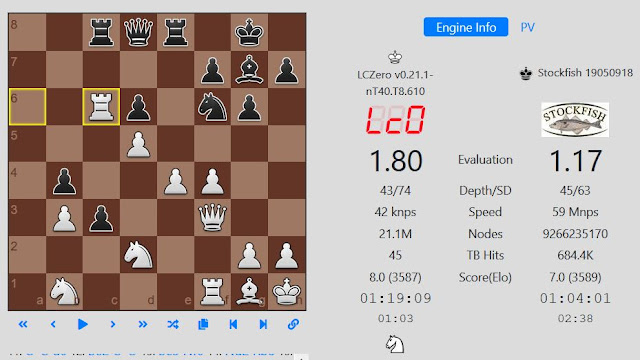 Stocfish exchanged on c6, allowing Leela to create a passer. Leela thought this was a mistake and its eval jumped over 3, it anticipated an exchange on c8.  As expected Leela gave a knight to remove the black passer. It was up a pawn with two passers on the queen side, yet Stockfish thought it was relatively safe. It anticipated to get rid of the c6 passer through a queen exchange, and failed to see Leela's move 29: 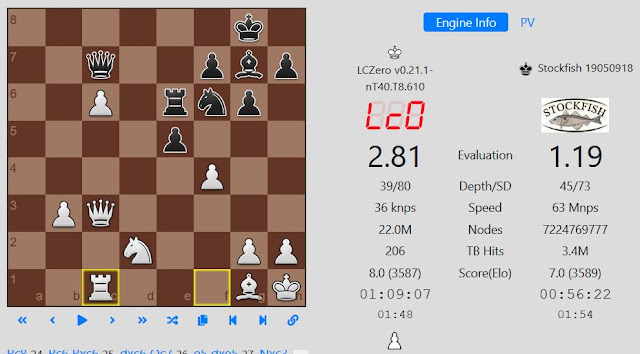 Stockfish's eval jumped after this move. Leela gave back a pawn but kept its passers, only then the queens were exchanged. Several moves later Stockfish had to give a knight to get rid of the passers, leading to a RBN vs RB position. 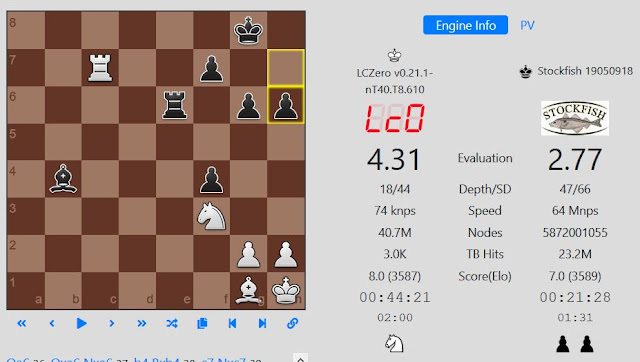 The ending was far from trivial, with all the pawns on the king side. However Leela did not blunder, perhaps taking longer than was necessary. Eventually it forced a bishop exchange and Stockfish agreed the RN vs R position was a win.
Posted by Assaf Wool at 11:21 AM