After 84 games Stockfish is leading 15-7 with 62 draws. For the first time in the match Stockfish increased its lead to +8. The remaining 16 games are really a formality, the winner will be Stockfish.

Evals stayed close to 0 in game 77. Both engines seemed anxious to exchange all their pieces, so that on move 32 the game reached a rook ending. The engines continued to capture pawns until only one was left in a tablebase draw.
The reverse game was similar, reaching a RB vs RB position on move 26. Stockfish was a pawn up but the evals were at 0. For 40 moves the engines either shuffled or captured pawns until there were no more pawn moves left and the game was adjudicated a draw.

Houdini's king stayed in the center in game 79, Stockfish castled long and opened the king side for a potential attack. Evals climbed to around 1 but got no higher, Stockfish took over the g file with its rooks and queen but could not make any effective threat. After exchanging a few pieces the best Stockfish could get was a 3-fold check repetition.
Stockfish castled its king in game 80 and had to be careful about Houdini's king side pawns exposing its king. Stockfish's king used a white pawn as a shield while it developed a counter attack on the queen side against white's king. Houdini tried a rook for bishop trade to open up the king side, Stockfish gave the material back and exchanged down to a drawn RB vs RB position with opposite color bishops.

Game 81 was balanced out of the opening with a small eval advantage for Stockfish. Early in the game Houdini sacrificed a knight for pawns and created connected passers on the queen side. 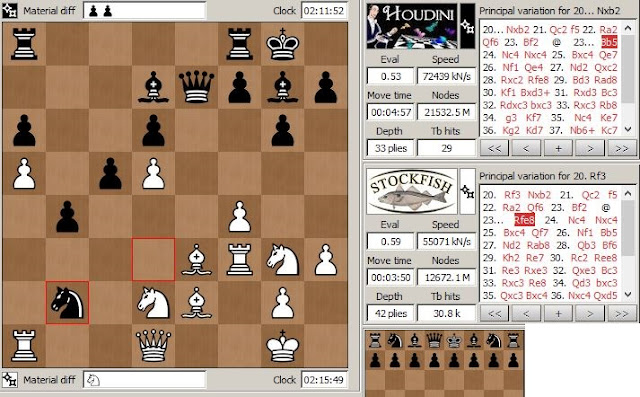 Stockfish got rid of the black knight in its territory with a trade and then blocked the passers with a bishop. It then countered on the king side, causing Houdini to give up its passers. After several exchanges only RBN vs RB was left. 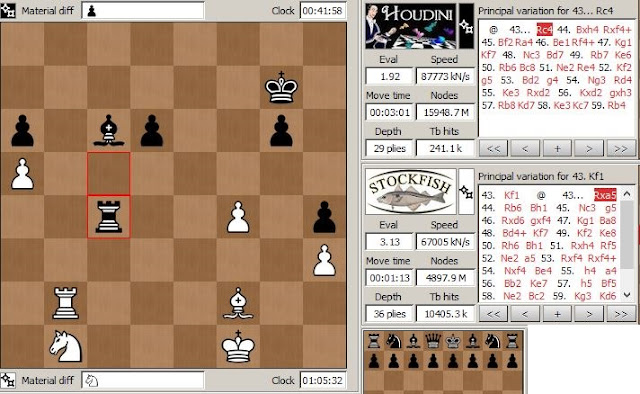 The extra white knight was more significant with less pieces on the board, evals were increasing rapidly. After exchanging several pawns Stockfish held on to its last one while its pieces surrounded the black king. The game ended before Houdini started to lose material. A dangerous sacrifice that backfired by Houdini. Stockfish goes up to +7 again.
The queen side was gone after 30 moves in game 82. Houdini had a small eval advantage and a weak passer, after exchanging queens only RBN vs RNN remained and Stockfish's eval fell to 0. The engines played on for another 25 moves, Houdini's eval was also 0 when only rooks remained and the game ended in a tablebase draw.

Game 83 was a Fried Liver attack line of the Two Knights defense, where white sacrificed a knight for pawns and the black king was exposed in the center. Houdini's king found refuge in the queen side surrounded by pieces while Stockfish e+f pawns looked intimidating. 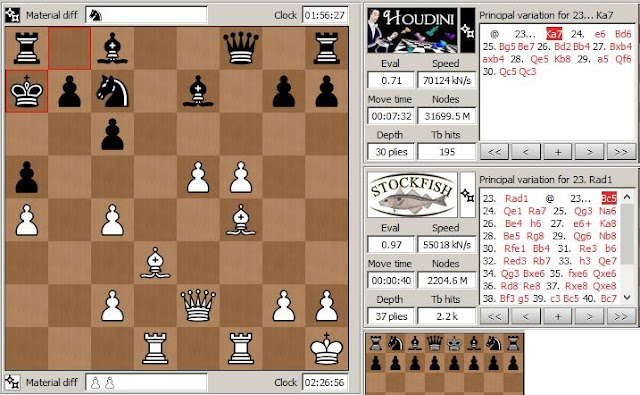 Stockfish's eval increased to nearly 3 as the pieces were exchanged, Houdini gave the piece back and only QR vs QR remained with Stockfish a pawn up. Houdini's eval was only a little over 1, could it hold the endgame? 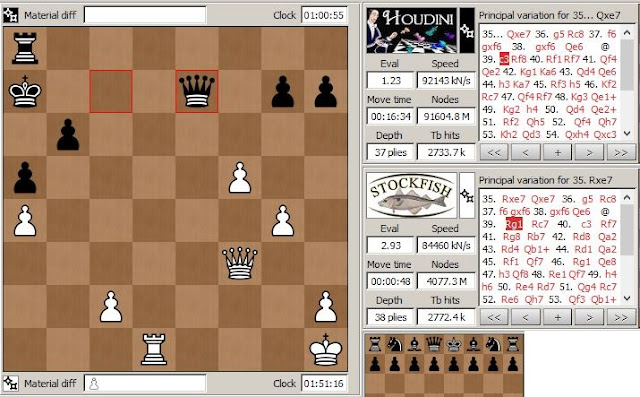 Stockfish soon took over the king side. The f pawn was on the 6th file and Houdini had to block it. When the h pawn started to march supported by the white king Houdini had no option but to resign. Stockfish's lead is +8, but can it hold this opening with the black pieces?
In the reverse game Houdini's eval rose to about 1 with its e+f passers while Stockfish had a knight advantage and its king walked to the queen side as before. However in this game after the exchanges Houdini got the material back and was two pawns up in a double rook ending. Only one of the extra pawns was a passer, the other was doubled. Stockfish was able to hold the position with a threat of perpetual check, the evals fell to 0 and a draw was agreed. Somehow Stockfish found a defense in this imbalanced opening.
Posted by Assaf Wool at 12:53 AM