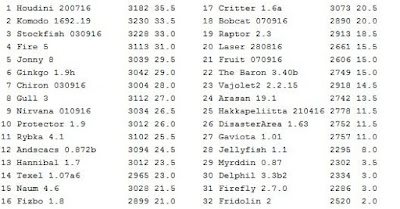 Houdini is in the lead, Komodo gained 0.5 points on Houdini and Stockfish and is second 2 points behind. These three remain unbeaten, in fact they have won all of their last 8 games except the draw between Houdini and Stockfish. Komodo's opponents have been much tougher than those of Houdini and Stockfish, and Komodo has some hope of closing the gap to the leader later in the RR.
In the second group of leaders Fire opened a 1.5 point gap to Jonny and Ginkgo with 7.5 points in the last 8 games. Fire's opponents have been quite weak so this gap is probably temporary (recall that Fire started led the table after 8 wins in the first RR).

Games that caught my eye

Round 32:
Komodo - Gull: Gull was a pawn up but Komodo had the initiative. For a long time Gull fought hard in a RNN vs RBN position. Komodo was able to crack Gull's defense after 70 moves, capturing pawns and getting a decisive lead. Komodo with a good start after a draw in the reverse game.

Hannibal - Chiron: Chiron was up a pawn in a closed position with low evals, when Hannibal saw an opportunity for a king side attack. Hannibal opened the king side with charging pawns and managed to win a bishop. Chiron's queen side pawns were still a threat but the extra piece was winning in the end. Each engine with a win in this mini-match.

Andscacs - Komodo: Komodo improved its position very slowly for 60 moves. Then in a RN vs RN position Komodo took a pawn and another, and it was just winning. A second win for Komodo against a tough opponent after drawing the reverse game. Stockfish and Houdini are also winning but they have much weaker opponents.

Gull - Ginkgo: Ginkgo managed to get a pawn advantage and evals above 1 in a N vs B ending. Gull's king was more active in the center and was enough to get the pawn back and get a draw.

Round 34:
Ginkgo - Andscacs: Both engines were sure the game was heading to a perpetual check when Andscacs blundered and Ginkgo found a way to win a bishop. The QB vs Q ending was a win for Ginkgo. An impressive double win for Ginkgo against Andscacs.

Komodo - Chiron: Chiron left its king a little exposed and Komodo used this for a deadly attack. Chiron exchanged as many pieces as it could but Komodo still won a piece, leading to a winning QRN vs QR position. Komodo starting the RR with 3 wins, compared to 3 draws in the first RR.

Round 35:
Jonny - Rybka: After 22 moves the position was QRR vs QRR with almost all pawns. Pawn lines were quickly established and the game ended in a 50-move draw. Jonny won the reverse game with black pieces, only a draw in white.

Chiron - Ginkgo: Ginkgo had an eval advantage as well as a rook for a bishop but the position was blocked and both engines started shuffling. Ginkgo avoided the 50-move rule, and as the rule approached again suddenly Chiron was clearly ahead in eval. Although after exchanging pieces the position was an opposite bishop ending Chiron had two passers and black couldn't stop both. Ginkgo should have taken the draw.

Round 36:
Fruit - Fire: Fire was down two pawns when it initiated a series of moves that ended in a perpetual check. Only a draw against Fruit.

Komodo - Jonny: In a balanced position Jonny allowed Komodo to get control of the center, followed by a series of exchanges where Komodo won a rook for a bishop. After exchanging queens the remaining R vs B ending was a win for Komodo.

Round 37:
Jonny - Ginkgo: The game reached a RRB vs RRB position at move 27, and though Jonny had some false hopes it had an advantage the game ended in a quick draw.

Andscacs - Fridolin: This should have been a very easy win for Andscacs. Instead Andscacs crashed 2 plys before adjudication in a clearly winning position. That's just sad.

Round 38
Ginkgo - Texel: The game looked like it was heading for a big shuffle when Texel exchanged queens and evals jumped to over 1 in its favor. For a few moves Texel was a pawn ahead in a RN vs RB position, then a pawn race started. Texel had to gave its bishop to stop the white pawns, and the RN vs R left was a tablebase draw.

Round 39:
Raptor - Ginkgo: Ginkgo sacrificed a bishop for a pawn in an attempt to start a king side attack. The attack faded a few moves later when Raptor gave an exchange back and created a BN to R imbalance. After a long shuffle the game ended in a tablebase draw.

Houdini - Stockfish: The last game of the round was also the most anticipated, the last time these engines meet before the superfinal. The game itself was not so interesting, perhaps that was expected? Stockfish equalized quickly and by move 25 only rooks and knights were left. Then the rooks were exchanged, evals became 0 and stayed there until a tablebase draw was reached. The main result is that Komodo gained 0.5 point on its two rivals.