After 70 games Stockfish leads 15-1 with 54 draws. Stockfish added one win in white and one in black, Houdini had a narrow escape in another game. With 30 games remaining Stockfish will undoubtedly win the match, can Houdini get a win in the remaining games?

Stockfish started game 61 with an eval under 1. On the board Stockfish had a space advantage on the queen side and a bishop pair. Houdini had a queen side passer, facing all the white pieces the passer was not going anywhere. 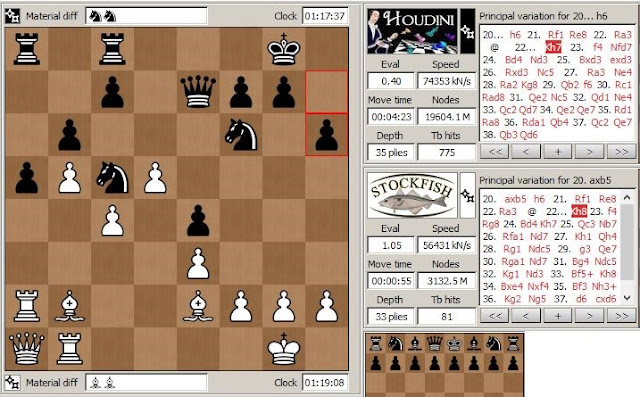 Stockfish's eval continued to increase. Houdini gave the passer to open a file on the queen side, and tried to counter attack. Stockfish's pieces were all aimed at the black king from a distance, looking very dangerous. Houdini tried to block the center, according to the evals Stockfish was much better though it was not clear on the board. 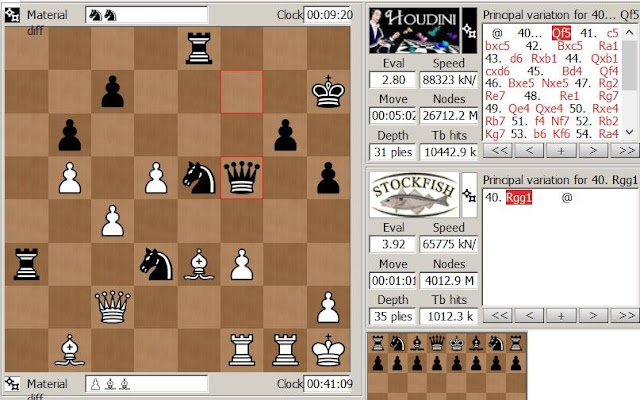 Stockfish broke through the queen side. Houdini gave a rook for one of the bishops, and Stockfish created an advanced queen side passer. The combination of the passer with a mating threat on the king side was enough for a win.
In game 62 Houdini did not keep its bishop pair, preferring to capture an early pawn. Stockfish exchanged queens and got the pawn back, evals decreasing toward 0. The game reached a RB vs RB position on move 28. In the end only pawns remained, both engines queened one pawn but the result was still a draw.

In game 63 Stockfish had an eval advantage under 1. The queens were exchanged early, the engines continued to trade pieces until reaching a rook ending with evals at 0. The game ended in a tablebase draw. Game 64 was similar, Stockfish's eval was 0 from move 18. The engines exchanged all their pieces to get a king and pawns ending, both engines queened a pawn and another draw.

Stockfish had an eval advantage in game 65 despite keeping ints king uncastled in the center. The engines exchanged queens early, by move 32 only RBB vs RBN remained and evals were close to 0. The game ended 40 moves later in a B vs N ending.
Houdini was ahead on eval starting game 66, Stockfish quickly equalized. After a few exchanges the center opened up. Houdini had a pawn majority on the queen side, material was balanced and evals were close to 0. 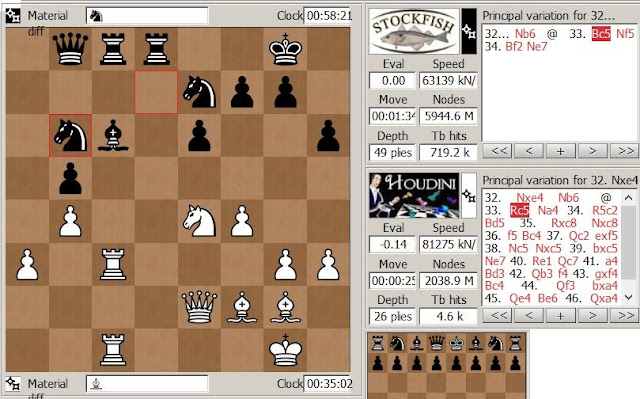 Houdini seemed more dominant in the central files. and yet the evals turned negative. Possibly the white king was more vulnerable to attack with no pawns on the 2nd rank. After exchanging bishops Stockfish controlled the long a8-h1 diagonal with its queen. Houdini gave a rook to take out the central black knight and then exchanged queens to get a RB vs RR ending. Evals were still below 1. 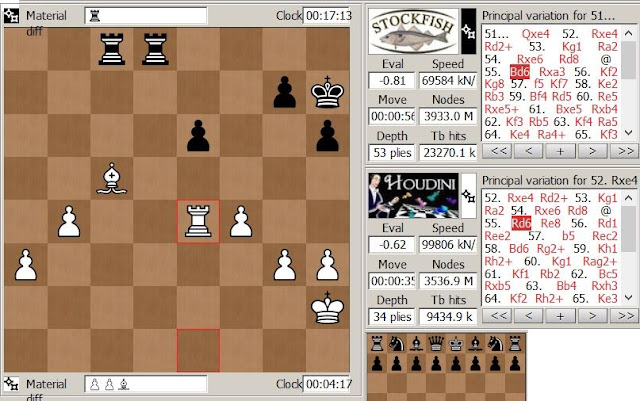 Houdini allowed the black rooks to take over the 2nd rank, and the evals jumped over 1. After several futile checks Stockfish found a way to improve. It used its rooks to guide the white king slowly to the queen side, with the h5 pawn blocking the path to the king side. 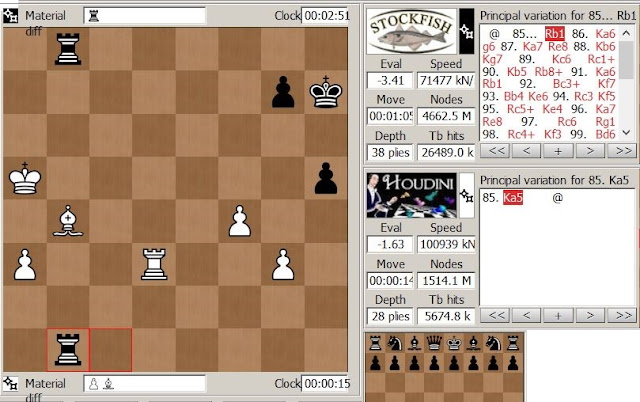 With its king unable to help Houdini's defense soon collapsed. Stockfish brought its king forward and pushed pawns on the king side. Houdini had to move its pawns and they became targets for the black rooks. The PV at the end of the game showed how black can capture all the white pawns.

Stockfish's eval was close to 1 in game 67, Houdini's king was uncastled in the center with almost all pieces on the board. Houdini trapped a white bishop on the king side yet the evals increased over 1. Stockfish gave two pawns and got a rook on the 7th rank, threatening the black king. It then freed its trapped bishop and got the pawns back, evals approaching 2. Houdini exchanged queens but evals continued to increase, white had passers on the king side and Houdini gave a rook for a bishop to stop them. The engines reached a RB vs BN ending and the evals stayed high but constant. Unexpectedly Houdini held the position to a draw. In game 68 Houdini mainained an eval of about 0.5 for over 40 moves. Stockfish castled its king, the engines opened the queen side and exchanged pieces. It again seemed that the black king was under threat when Houdini's rook moved to the 7th rank, though it didn't stay there for very long. In a QRB vs QRB position Houdini captured a pawn, Stockfish countered by trading down to a drawn rook ending.

Evals stayed low in game 69. The engines exchanged pieces in an open position, when all minor pieces were gone the two kings were exposed to attacks. The engines chose to draw by reducing to a tablebase draw, though there were possible perpetual check draws available. In game 70 Stockfish gave a rook to get a perpetual check draw after only 31 moves.