The final results for stage 3 are:

Congratulations to Komodo and Stockfish, the finalists of season 8 !!!
This was the obvious result but the strength of Gull in the first half of the stage, together with Stockfish losing several games on time, made the path to qualification very much unexpected.

There were some more problems with web access and down time of the live website, but after some code fixes the site was back faster than ever, and no need to reload for updates.

Stockfish lost on time again, unbelievable. It happened against Hannibal when qualification was almost determined theoretically so the crowd response was not so loud, but still - this was the version that was supposed to have better time management. Obviously the bug is still there, and according to the chat it could still be there in the finals. Any long game that gets Stockfish near the increment is going to be touch and go unless something is done soon. Against Komodo there will be no chance of getting easy points, and losing a few games on time can determine the match outcome.


Hannibal-Protector was another short draw, this time 24 moves. Hannibal-Komodo took 28 moves to draw. The engines had enough of stage 3 and wanted to go home and rest for the finals or for next season.

Gull-Stockfish was the last chance for Gull to get close to the leaders. However it was Stockfish who tried to win with black, but it could only get a pawn advantage which was not enough for the endgame. Only a draw for Gull against Houdini and it was two points away from Stockfish with two games left. Stockfish prolonged the theoretical possibility when it lost on time against Hannibal. Stockfish beat Protector in a beautiful come-back into a difficult ending RB vs RBN, and Gull's run was over officially.

The last Stockfish-Komodo game before the finals ended in an uneventful draw. This completes 6 straight draws between them in stage 3, very likely that we will see many more draws in the finals (hopefully not a lot of crashes and bugs...)

On move 35 the position was: 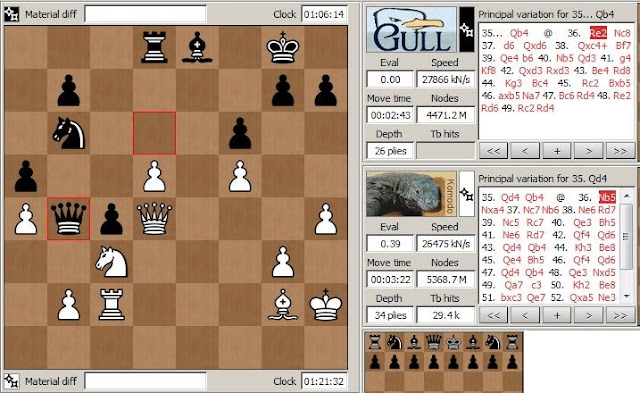 Gull seemed to be on the sure path towards a draw. Komodo had an isolated passed pawn while Gull had a pawn advantage on the queen side. There were only a few pieces left on the board, but Komodo found a way to create some excitement. The white knight moved forward, sacrificing the a4 pawn to get to e6. 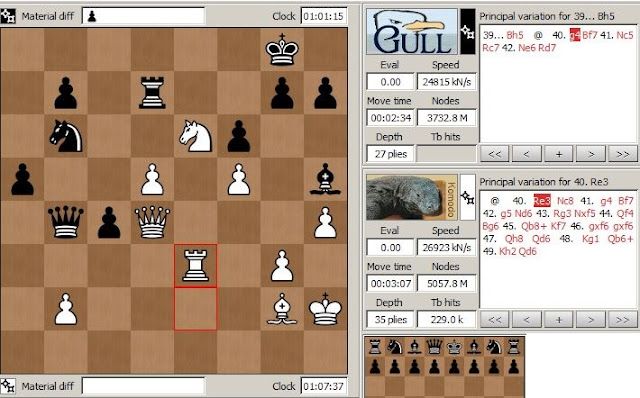 That knight was in a strong position, and the black king was starting to feel pressure. Komodo advanced the g pawn trying to open the king side, and in the process sacrificed another pawn and then a rook sacrifice?!? 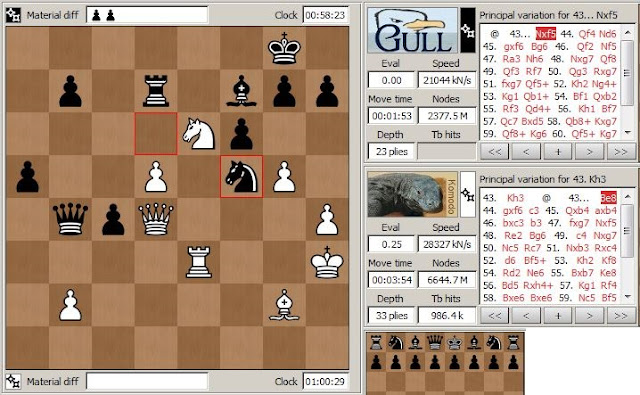 False alarm, Qf4 and the threat of Qb8 saves the rook. Moreover Komodo's eval jumped above 1 as Gull's king became exposed. Gull's eval soon followed, was this another loss for Gull? After a second long think by Gull the path forward became clear, both engines agreed on their moves for over 20 moves in their PV. 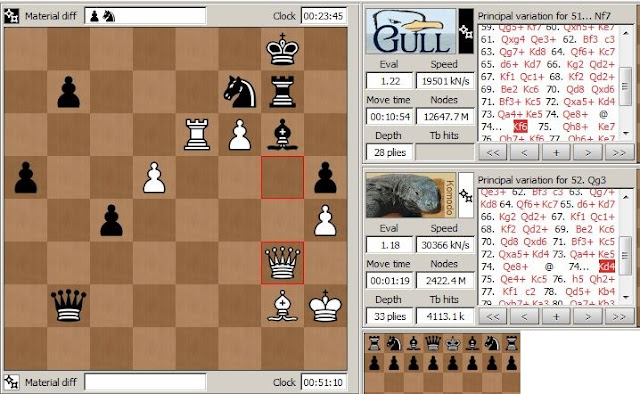 Komodo was going to win some material but only to reach a QB vs Q ending with almost no pawns. Indeed the game followed along this line, and Komodo's eval started drifting downwards. The excitement was over - once the pawns started to disappear it was clear the game was heading to a tablebase draw. Gull pulled a great defense against Komodo - something only very strong engines can do.
Posted by Assaf Wool at 7:09 PM