The final crosstable of stage 2 is:

The qualifying engines are Komodo, Stockfish, Houdini, Gull, Protector and Hannibal. Congratulations to the qualifiers and good luck in the next stage. We all know who will reach the finals right? To the losers, get better and see you in the next season.

The qualification race was very tense and went on until the last game. Nirvana dropped from the race first, losing ro Komodo. Protector, Ginkgo, Texel and Fire kept their places with draws, while Hannibal's loss to Houdini put it in 7th place after round 21. Every game in the last round mattered. Protector's win over The Baron made sure it qualifies. Fire needed a win against 'draw master' Gull, but instead Gull won and Fire was out. In the next game Texel surprised everyone including itself when it beat Houdini. The game was very long, including several shuffling stretches, but Texel kept improving not through Houdini blunders or 50-move horizon effects. Perhaps a better engine would have won faster. In any case Texel couldn't qualify due to its low tie-break score, but it got close. Then came Hannbal's win over Chiron, this put it ahead in the race with the last chance going to Ginkgo in the last game against Nirvana. Right from the start of the game it became clear that Ginkgo could at most get a draw which was not enough. The only hope for it was a Nirvana crash, but in the end Nirvana won and Ginkgo was out.

The remaining game was Stockfish - Komodo. Komodo has already made sure of winning the stage but still everyone wanted to see the outcome. True to its reputation, Stockfish attacked fiercely with a pawn storm against Komodo's king. The eval peaked briefly above 1 before coming down again as Komodo fought back. Stockfish got a pawn advantage in the resulting queen ending but a draw by perpetual check was quickly reached.

Komodo won against Nirvana, again showing its incredible power of winning in what seems to be a sure draw. At move 24 the position was: 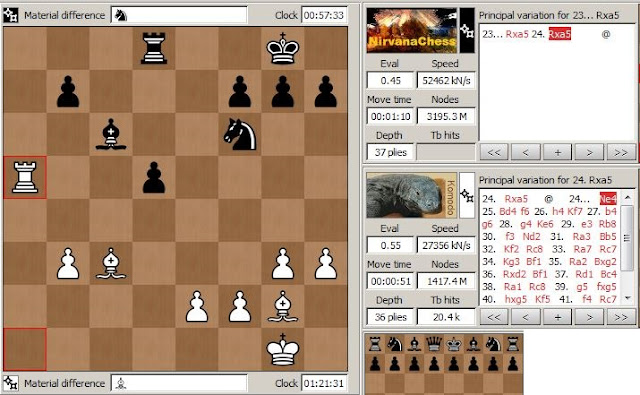 The material is almost equal, evals are leaning toward white but the path to a victory is not clear. For the next 25 moves it appeared that not a lot changed. Komodo advanced its pawns on the king side and Nirvana chose to send its king to the queens side protecting the b-pawn. Could Nirvana really hold out? At move 54 Nirvana sacrificed a pawn to exchange a knight for a bishop. 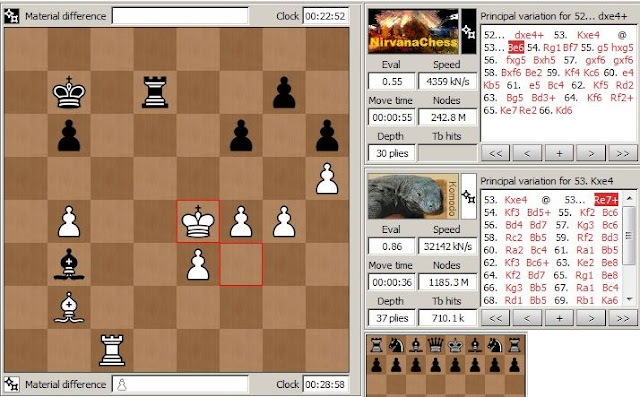 The remaining bishops were of opposite colors, a sure sign of a draw even with a pawn advantage. Black's weaknesses were that its king was confined to the wrong side and its king side pawns were all on black squares. A few moves later the b-pawns were gone, and there were a series of moves which were hard to follow. Komodo knew what it was doing and its eval increased gradually. The object was to be able to advance the e-pawn, and Komodo managed this on move 80. 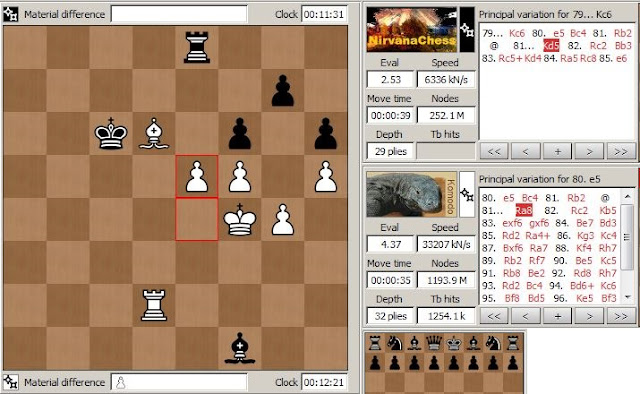 From here the threat of queening forced Nirvana to lose material and the game was over. A remarkable win for Komodo.
After this loss Nirvana was out of the qualifying race.