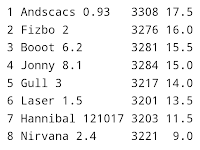 Hannibal and Nirvana close the table. Both have crashed in these two RRs, and both are a crash away from disqualification. They have been limited to 16 threads in order to improve their stability, this may have also contributed to their worse scores.

Booot - Jonny: Booot had an eval advantage out of the opening but Jonny equalized quickly. Most pawns remained on the board and the engines shuffled for a while, Jonny had more space and a small eval advantage. The engines opened a file on the king side and exchanged all rooks, and several exchanges later only QN vs QB remained. Evals were at 0 when Booot blundered the endgame. It allowed the black king to move forward, creating mating threats and eventually an advanced passed pawn in a queen endgame. A rare black win in the biased openings part of the division.

Andscacs - Booot: Andscacs started with an eval advantage that gradually increased. There were many early exchanges and by move 24 only R vs R remained with Andscacs a pawn up. A few moves later the pawn position was: on the king side 3 against 3 pawns and on the queen side an isolated white passer. Evals increased over 2 as Andscacs pushed its passer, but without support from its king the passer couldn't get past the 7th rank. It took 50 more moves but Booot held the draw. Did Andscacs miss a win?

Laser - Nirvana: Nirvana took the pawn on b2 early in the game, but it turned out to be a poisoned pawn. Laser was better developed, and after a series of exchanges it won a piece and reached a QN vs Q position. The knight was sufficient for a win after the queens were off.

Gull - Andscacs: Gull had an eval advantage after the opening. All pieces were on the board when Gull sacrificed a knight for pawns on move 18 to open the queen side. Gull's pieces remained passive as Andscacs started to press on the king side. Gull realized too late that it was in danger when Andscacs made mating threats, the game was quickly over.

Nirvana - Jonny: Nirvana had an eval advantage after the opening, Jonny equalized without too much trouble. The game seemed to be heading for a draw with evals at 0. Nirvana was a pawn down but had a queen side passer, Jonny's pieces built a fortress on the king side and didn't move. When Nirvana moved the passer forward it started to look dangerous. Jonny sent a knight to defend and all of a sudden the king side collapsed. Jonny lost material and its king was exposed to attack, the game was soon adjudicated a win for Nirvana. Did Jonny blunder? A rare win for Nirvana.

Fizbo - Booot: Fizbo had an eval advantage after the opening, it concentrated its pieces on the king side which had an open file facing the black king. Booot simply marched its king out of danger, while clearing the center and capturing a pawn. After Booot connected its rooks the white king started to look exposed, evals jumped over 2 in favor of Booot. Fizbo could not stop the black pieces from getting to the back ranks, and then Booot had too many threats on the king and the defending pieces, the game was adjudicated.

After RR 3 Fizbo and Andscacs are in the lead with a margin of 1.5 points between 2nd and 3rd place in the table. Nirvana is 2.5 points below the rest, it had a very poor RR with only 1.5/7 points. The engines in places 3-7 are all within 0.5 points. Hannibal and Nirvana crashed again, both are one crash away from disqualification, both are limited to 16 threads for better stability.

Nirvana - Andscacs: Nirvana had an eval advantage after the opening, with more space while all pawns were on the board. After a few exchanges Andscacs equalized, and with a queen side passer it was a little better. Andscacs offered a pawn, and when Nirvana took it the evals jumped over 1. Nirvana traded a bishop and pawns for a rook but now the black queen and rook moved behind the white pawn line and the white king was exposed to attacks in a QB vs QR position. The endgame was not straightforward but eventually the game reached a queen ending won for Andscacs. Andscacs won both sides of this opening.

Laser - Jonny: Laser started with an eval advantage, after many exchanges Jonny equalized and only RRN vs RRN were left by move 25. Laser had a weak c pawn which forced its rooks to passively protect it, and Jonny took the initiative. After exchanging a pair of rooks Jonny captured a pawn and traded down to a won knight ending. A double win for Jonny in this opening.

Hannibal - Andscacs: Andscacs took over the game with a pawn storm on the king side, despite its castled king. After opening a file and exchanging all rooks only QN vs QB remained. After a file was opened on the queen side black's queen crossed Hannibal's pawn line and captured a pawn. Evals increased rapidly and the game was soon over. Another win in black for Andscacs.

Nirvana - Laser: The game reached a QRB vs QRN position on move 30, evals remained close to 0. Nirvana then traded a rook for a knight and pawns, evals stayed 0 even after it had to give the bishop to stop a passer. It seemed that Nirvana's king side passers were strong enough to counter Laser's extra rook, but Nirvana blundered the endgame and gave the win to Laser.

Gull - Booot: Gull had an eval advantage after the opening but Booot had more space on the king side. Gull's defending pieces on the king side could hardly move and Booot took advantage of this and won a rook for a bishop with a skewer. Gull continued to struggle and lose material until the game was adjudicated.

Hannibal - Laser: Evals were close to 0 in a closed position with almost all pieces on the board. After opening the queen side both engines had a passer there, Laser's passer had better support. Laser captured the white passer, advanced its passer to the 2nd rank and traded down to a winning rook ending. Laser won both sides of this opening, and together with two wins against Nirvana it escapes the relegation zone.

For a while Andscacs thought it had an advantage, while Fizbo disagreed. Fizbo had an open file on the king side facing the white king. 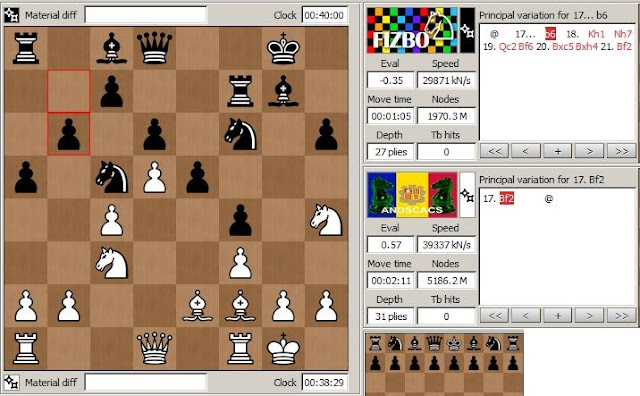 Andscacs tried to counter on the queen side, in a series of exchanges it traded a bishop for pawns to clear the black queen side. Fizbo ignored this and put all its heavy pieces on the g file, its evals jumping over 2. 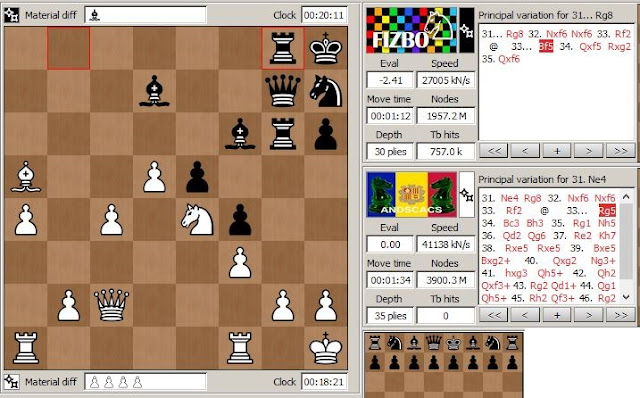 Andscacs saw the danger too late, and after a second series of exchanges the evals were over 3 in a RB vs Q position. The queen was too strong against the exposed white king and scattered pawns, a win for Fizbo. First loss for Andscacs in the division, the win in black gives Fizbo the lead.