Stockfish is the winner of the season 9 superfinal !!!
We've known that would be the result for some time now, but now it is official.

Stockfish started game 93 with an eval advantage that gradually increased. The pawn structure was a mess for both engines and both kings did not castle. Starting from move 17 the engines played out a sequence of 14 moves they both predicted, in which Stockfish sacrificed a knight and got it back, queens were exchanged, and Houdini's king side pawns were gone. At move 30 only RRB vs RRB remained. 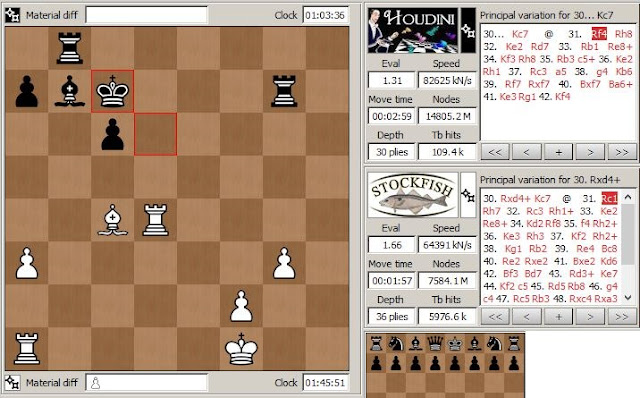 Stockfish's connected passers were a long term threat that Houdini had to deal with. It used the rooks to make checks and attack the white pieces. Stockfish was patient and made a pawn move whenever it had a chance and only if it was safe. The pawns were half of the way across when Stockfish exchanged the bishops. 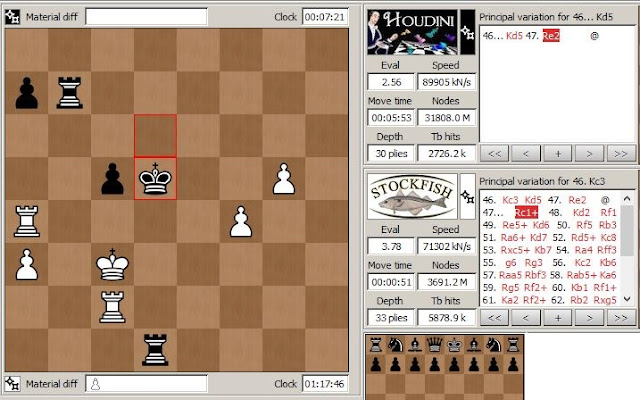 Houdini could only delay the inevitable with its rooks. Stockfish just had to be careful not to get mated and to avoid perpetual check. Once the pawns got close enough to queening the game would be over. With this win Stockfish goes up to +10.
In the reverse game Stockfish shut down Houdini's attack very quickly. The king side pawns remained intact and both kings castled. Evals fell to 0 as the engines continued to exchange pieces, reaching  BN vs BN position on move 33. The game ended in a tablebase draw.

Game 95 started with an advantage for black, a rare occurence in the match. Houdini was a pawn up out of the opening, Stockfish gave a second pawn to get the initiative. After clearing the center there was a series of exchanges,. leading to material equality and a drawn rook ending.
Stockfish got nothing out of the opening in game 96, evals were close to 0. There was a pawn advantage for black on the queen side, but Houdini's position looked quite safe and the game seemed to be going nowhere. There was a long shuffle in which Stockfish's king walked to the queen side, preparing a break on the king side, while Houdini was getting very low on time. When the break came the evals increased to about 1 (for black), the king side opened and the game reached a double rook ending with Stockfish a pawn up. However Houdini managed to hold the position while playing on increments. It exchanged pawns and a pair of rooks to get to a rook ending with 2 vs 1 pawns on the queen side, a draw. This was probably the closest to a black win we would get in the match.

In game 97 Houdini gave a pawn and opened the center. After many exchanges the game reached a RBN vs RBB position, Stockfish a pawn up while Houdini had a passer on the queen side. To stop the passer Stockfish exchanged the minor pieces leading to a drawn rook ending.
In game 98 the position remained closed with very few exchanges. Evals remained close to 0 when the king side opened and both kings became exposed. Instead of attacking the engines settled for a repetition draw on move 35. Are the engines tired after a long match and want to go home?

Houdini's king stayed uncastled in game 99, Stockfish attacked the king side with its pawns after castling long. Stockfish sacrificed a pawn and tried to open up the king side, Houdini's defense remained strong and the result was a quick repetition draw on move 32.
In the final game 100 Stockfish castled into the pawn storm on the king side which looked dangerous. Houdini sacrificed a pawn and got a strong king side attack while trapping one of the black bishops, evals climbed above 1. Stockfish realized it was in trouble and it exchanged pieces giving a rook for a bishop and pawns to get to a RRB vs RBB position. 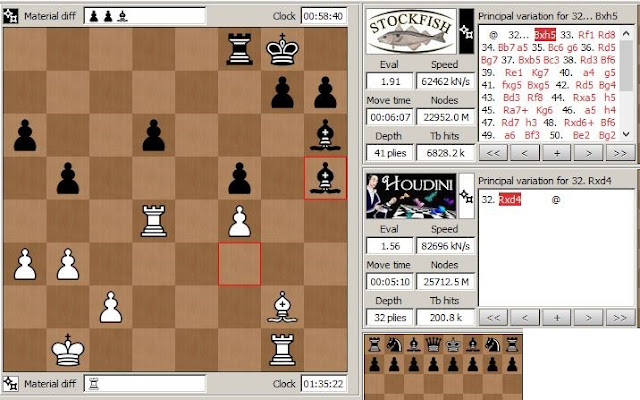 The black bishops were on the edge of the board and it took a few moves to put them in better positions. Meanwhile Houdini was capturing pawns, clearing the queen side and creating passers. Stockcfish tried to block the king side with its remaining pieces but it was hopeless. 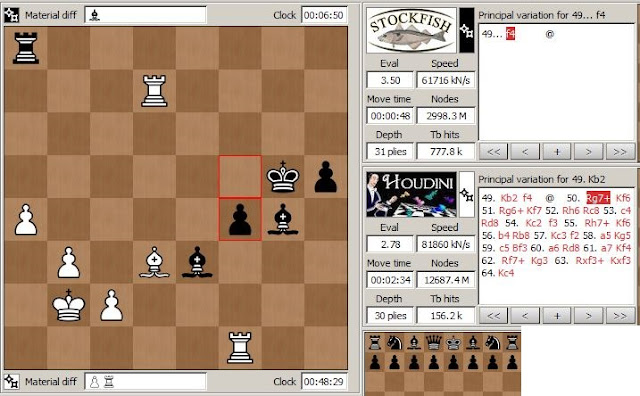 The white pawns started to march and Stockfish did not have enough strength to stop all of them. It was able to trade one of its pawns for one of the passers but no more. When Houdini's remaining pawns reached the 6th rank Stockfish resigned. Houdini won the last game, but it was Stockfish that won the match.
Posted by Assaf Wool at 1:07 AM