After 16 games Stockfish is leading 4-0 over Houdini with 12 draws. Houdini has not had a game where it was close to a win yet, even with biased openings. Stockfish is very much in control of this match.

In game 9 Stockfish appeared to sacrifice a rook, but Houdini was careful not to accept. Instead the engines started a series of captures that resulted in the following position on move 20: 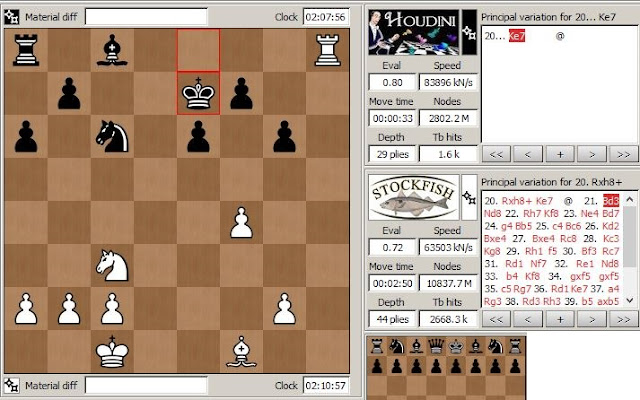 Material was even but the white pieces were much better placed and Houdini needed time to free its rook and pinned bishop. By the time the rook got out of its corner the evals were above 1 in a RB vs RN endgame. Stockfish played better, advancing its queen side pawns and eliminating the ones on the king side. 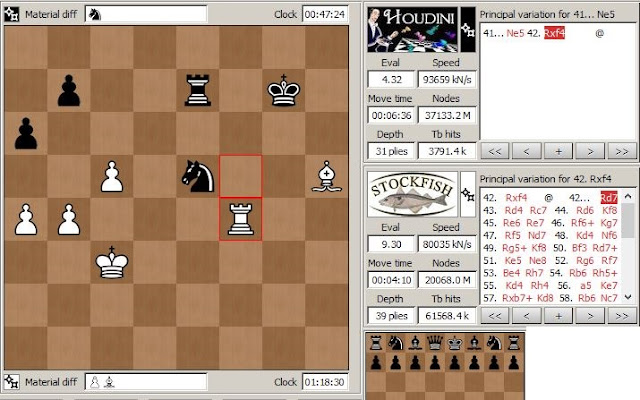 When Stockfish blocked the black king away from the pawns it was game over, nothing could stop the white pawns from queening. A third straight win for Stockfish in white.
In game 10 the engines exchanged many pieces as well, this time Stockfish gave a rook for a knight and pawns and this led to a RB vs NN on move 24. Houdini kept a small eval advantage for a few moves more before the evals collapsed to 0. The engines continued to exchange down until reaching a drawn tablebase position. Stockfish is 3-0 up after 5 openings, the match looks one-sided so far.

Stockfish had a small eval advantage after the opening of game 11. There were many early exchanges and only RRB vs RRB were left at move 26. Evals fell to 0 soon after and the game ended in a drawn tablebase position. In the reverse game the exchanges were different and the queens stayed on the board. Houdini had an eval advantage until it completely locked the king side pawns. Stockfish's eval dropped to 0 immediately and the engines started to shuffle. It took another 60 moves for the engines to agree on a draw.

Game 13 also started with a small advantage for white and many exchanges. The game reached a rook endgame on move 31 with evals at 0, and a drawn tablebase position 20 moves later. In game 14 the engines castled in opposite directions. Stockfish's eval dropped to 0 very quickly as it built a strong defense for its king. Houdini's pieces were scattered and its king a little exposed and the evals turned in Stockfish's favor. With only rooks and knights on the board each engine had 3 connected passers on opposite sides. For a short while Stockfish's eval rose above 1 when it went a pawn up, but the advancing pawns forced exchanges and the game reached a drawn rook ending.

There were almost no exchanges in the opening of game 15, each engine kept its pieces behind the pawn line. Stockfish had more space while almost all of Houdini's pieces stayed on the first 3 ranks. For almost 15 moves Houdini just waited while Stockfish slowly advanced its pawns across the board. It appeared that Houdini was safe enough, the evals got very close to 0. 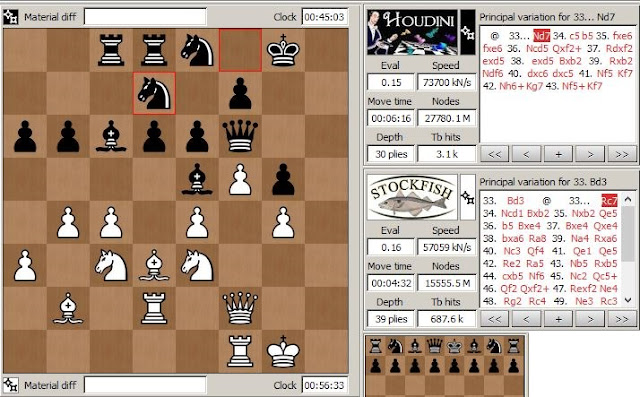 Suddenly Stockfish's eval jumped, it considered Houdini's 33rd move an inaccuracy. After a series of exchanges the king side was open and Stockfish had a Q for RB imbalance. A few more exchanges opened up the queen side as well, the evals remained under 1. 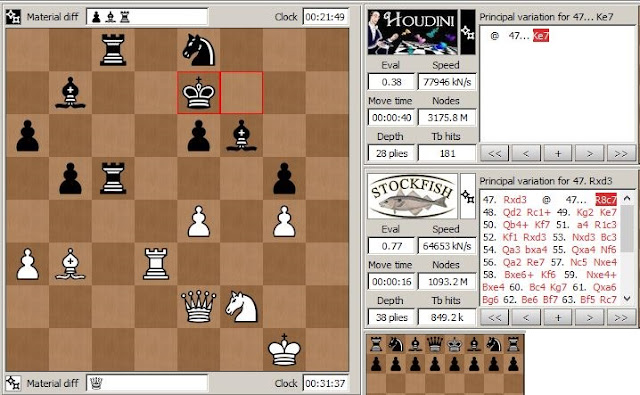 The white queen was very effective in making threats and applying pressure on the black pieces, Houdini was forced to defend and gave a rook for a knight. The evals increased very quickly, and although Stockfish lost its pawns its strong pieces surrounded the black king and Houdini didn't have the power to stop them. Stockfish outplayed Houdini in this game, the result is now 4-0.
Game 16 also had pieces behind pawn lines and Houdini had space advantage. Here the king side pawns were locked and there were many exchanges in the center resulting in a RRB vs RRB position on move 28. After a pair of rooks was exchanged Stockfish's eval fell to 0, and Houdini's eval did the same a few moves later. The game ended in a tablebase draw.