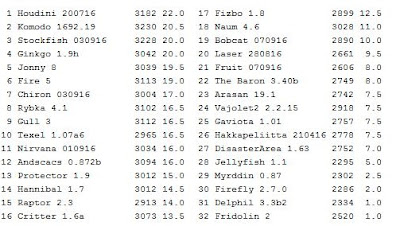 Houdini is still going strong, 7 points in the last 8 games and 1.5 points clear in the lead. Komodo with 7.5 points climbed to second place, recall the slow start it had. Stockfish on the other hand dropped to third with 6 points (4 draws), tied with Ginkgo with a result of 7.5 points. Jonny and Fire, 5.5 points each, are a little behind. These six engines stand out leading the table so far. Houdini, Stockfish and Komodo remain unbeaten, though this may change in the next rounds when they meet each other.

The draw rate is very low, but many draws in the table are between engines in the top half of the table. For example 26 of 47 games (55%) within the top 12 engines are draws.


Games that caught my eye

Round 17
Chiron - Houdini: Chiron couldn't stop Houdini even with the advantage of white pieces. There were many early exchanges, and Houdini managed to get space advantage and attack with a pawn storm supported by the king. Houdini then converted the advantage to a winning N vs B ending with a pawn up.

Critter - Stockfish: Stockfish thought it was better in a RRB vs RRB position, then pawns were exchanged as well as the bishops and both engines saw that with rooks only the game was a draw. Stockfish now 1.5 points behind Houdini, tied with Fire. Jonny is in second place.

Round 18:
Fruit - Komodo: Komodo equalized quickly with many early exchanges. With RB vs RB remaining Fruit was able to hold a draw.

Stockfish - Jonny: After move 17 only RRB vs RRN were left and the shuffling began. There was almost no change until the drawn end almost 100 moves later.

Houdini - Critter: Another solid game for Houdini. It gained a space advantage in the opening, Gull's king and pieces were cramped in the corner. Houdini exchanged everything and got a winning rook ending, extending its lead to 1.5 points to Jonny and Fire, 2 points to Stockfish.

Round 19:
Gull - Fire: This was a long game. Fire thought it was better while there were still many pieces on the board. Then after most pieces were exchanged it was Gull who was optimistic. In the end though, Fire sacrificed a knight for the dangerous white pawns and Gull could only draw the N vs pawns endgame.

Jonny - Houdini: Jonny had space advantage in a closed position, but Houdini played better to reach a double rook ending a pawn up. The game became static and Houdini could not improve its position, leading to a draw.

Texel - Stockfish: Another long game, the evals stayed close to 0 most of the time. The game reached a drawn 7-man RB vs RB position that continued more than 40 moves before adjudication. Stockfish missed an opportunity to get closer to Houdini.

Round 20:
Nirvana - Jonny: Jonny was better out of the opening. It kept the pressure on for more than 80 moves while Nirvana remained calm in defense. The game ended in a draw.

Fire - Andscacs: This game was a draw from start to end, with evals close to 0. At least it didn't last very long.

Round 21:
Chiron - Fire: Fire's pawns formed a V shaped line blocking the whole board. When Chiron broke through it was a pawn up with only opposite color bishops left. The engines realized it was a draw 70 moves later. Fire continuing to drop down in the ranks, now in 6th place.

Round 22:
Fire - Critter: Fire had a big eval advantage after the opening and then chose a BN vs R imbalance. Critter's king was isolated and Fire launched an attack, eventually winning material and the game.

Round 23:
Jonny - Fire: The game was balanced for 40 moves until Jonny's queen took a poisoned pawn, losing time and allowing Fire to start a king side attack. Jonny tried to exchanged pieces and gave a rook for a knight but it's position soon became hopeless. Fire overtakes Jonny in the rankings.

Protector - Houdini: The game turned into a rook ending by move 30 and Protector held a draw without too much trouble. Houdini loses a half-point, can the other engines close the gap?

Hannibal - Stockfish: Stockfish tried hard to win, it kept pieces on the board and got an eval advantage. After 45 moves queens were exchanged and the game reached a BN vs BB position. Stockfish won a pawn but could do no more, the engines started a long shuffle that resulted in a draw almost 90 moves later. Stockfish remains 2 points behind Houdini, level with Fire. Komodo and Ginkgo used this opportunity to climb to 2nd/3rd 1.5 points behind Houdini.

Round 24:
Arasan - Ginkgo: After 20 moves it was a RBB vs RBN position. Ginkgo hoped Arasan would blunder, and it seemed to be the case when the position opened a litle and Ginkgo was up a pawn with evals above 1. Arasan had to give a bishop for a passer, reducing to a R vs RN ending. Ginkgo lost all its pawns however, resulting in a tablebase draw.

Stockfish - Rybka: The game seemed to be a shuffling draw when Rybka blundered and let Stockfish open the queen side and create a passer. This cost Rybka a piece and eventually the game.

Fire - Texel: Fire opened the king side with its king uncastled, allowing Texel to launch an attack on the white king. Texel sacrificed a rook for a bishop, but later regained the material. After the attack was over Texel had a clear win with 3 extra pawns. Excellent result for Texel, Fire dropping to 6th place.